Tens of thousands of Haitians participated in protests across the country on Sunday to demand President Jovenel Moïse’s resignation. The mass action came after an audit found politicians had embezzled billions in development funds from PetroCaribe, a socialist Venezuelan program that granted poorer Western Hemisphere nations access to cheap oil.

PetroCaribe, which technically continues to exist despite the Venezuela’s government’s near-total economic collapse, also granted billions in funds to underdeveloped nations for major infrastructure projects. Nominally, the projects were intended to turn the countries into more stable Venezuelan oil clients, though in reality the project was largely used to buy support for Nicolás Maduro’s socialist regime at international venues like the Organization of American States (OAS) and the United Nations.

Haiti’s Superior Court of Auditors (CSCCA) released a 600-page report last week revealed that the government had invested billions in PetroCaribe projects that never materialized, leaving unanswered what happened to the money.

In response, tens of thousands of people took the streets Sunday demanding that Moïse resign, according to the country’s Le Nouvelliste newspaper. The protests on Sunday engulfed at least seven cities in Haiti, local media reported, and quickly became violent as protesters burned tires, burned down homes, threw stones at police, and burned down residences. Protesters reportedly burned two police cars in addition to private residences in the capital, Port-au-Prince. Police blocked the road to the presidential palace to prevent protesters from attacking it. 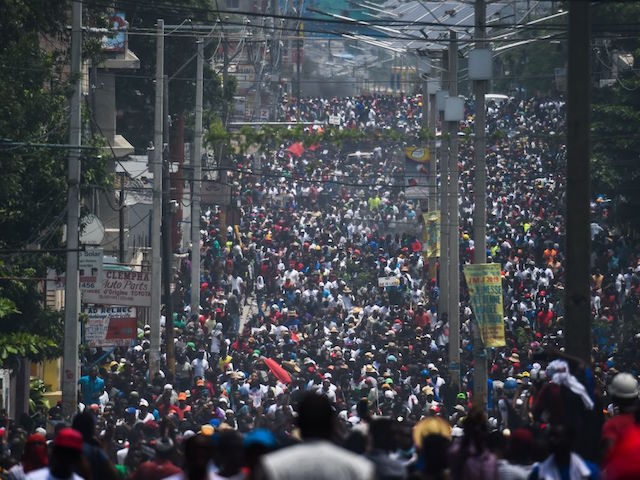 Demonstrators march during a protest against the ruling government in Port-au-Prince on June 9, 2019 (CHANDAN KHANNA/AFP/Getty Images) 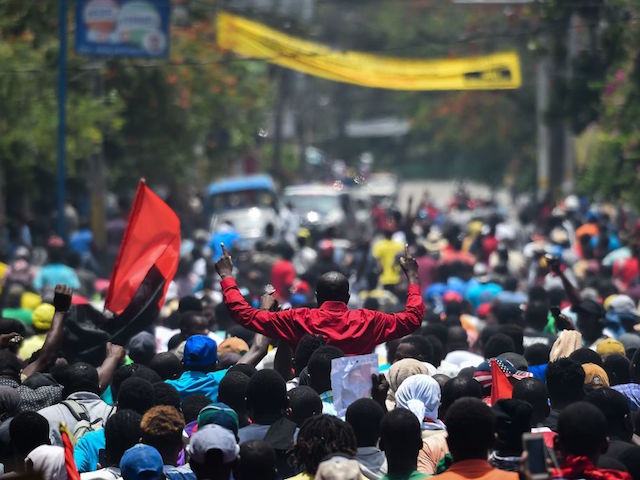 Demonstrators march during a protest against the ruling government in Port-au-Prince on June 9, 2019. (CHANDAN KHANNA/AFP/Getty Images) 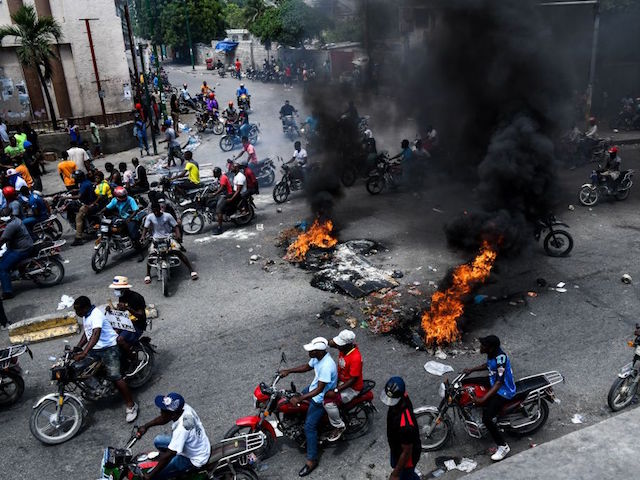 Demonstrators march and ride motorcycles past burning tyres during a demonstration against the ruling government in Port-au-Prince on June 9, 2019. (CHANDAN KHANNA/AFP/Getty Images)

Police said late Sunday that at least two protesters had died of gunshot wounds – they did not specify if police or protesters did the shooting – and another four were wounded. Video of a man lying unconscious on the ground during the protests circulated on social media, suggesting that police had killed him. The National Police of Haiti issued a statement condemning abuses and police brutality in response, saying, “such practices [as in the video] do not do justice to an institution that guarantees democracy and the rule of law.” Police vowed a timely investigation of the video.

Despite the tens of thousands of the streets, Le Nouvelliste reported only three arrests. 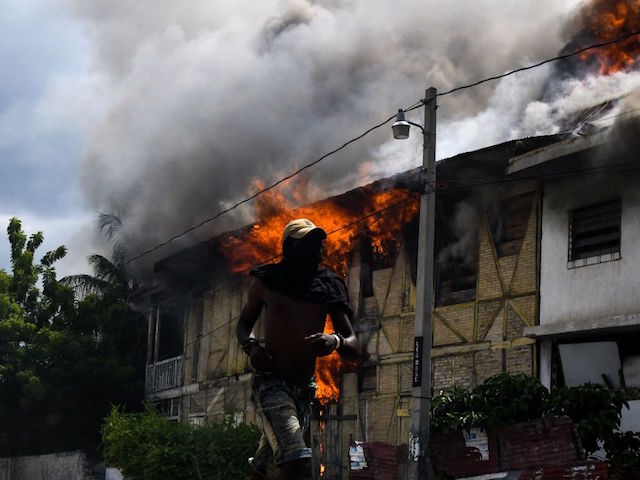 A demonstrator runs past a burning house during a protest march against the ruling government in Port-au-Prince on June 9, 2019. (CHANDAN KHANNA/AFP/Getty Images) 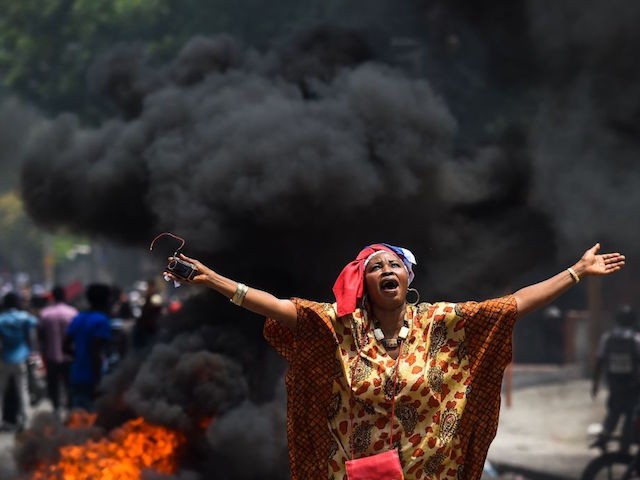 A demonstrator holds up her arms and chants slogans during a protest against the ruling government in Port-au-Prince on June 9, 2019. (CHANDAN KHANNA/AFP/Getty Images) 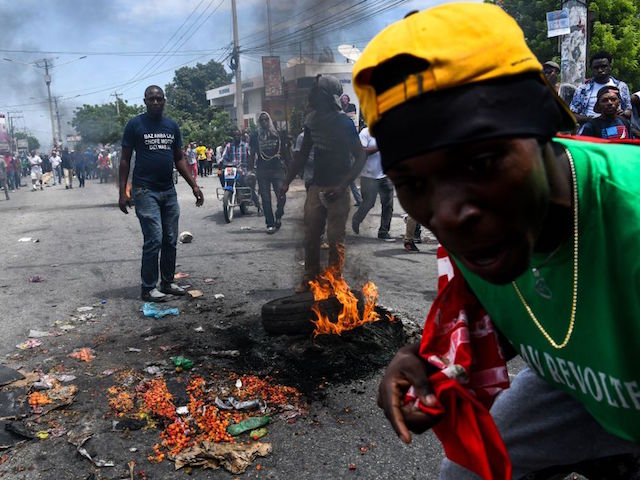 Demonstrators march past burning tyres during a demonstration against the ruling government in Port-au-Prince on June 9, 2019. (CHANDAN KHANNA/AFP/Getty Images) 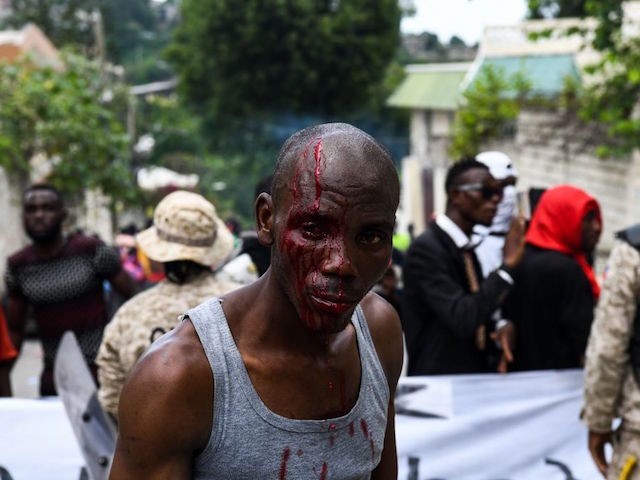 A demonstrator bleeds from a wound on his head during a protest march against the ruling government in Port-au-Prince on June 9, 2019. (CHANDAN KHANNA/AFP/Getty Images)

Local advocacy groups organized the protests and received support from the Catholic Church.

“We demand that all those who steal funds be judged and punished, their properties confiscated and handed over to the state for serious development projects, that the president resign and place himself at the disposal of justice,” Vélina Charlier, an activist with the group “We’re Not Sleepy,” said at the protests.

The report implicates over $2 billion in PetroCaribe funds for various government projects in total.

The CSCCA personally incriminated President Moïse as the head of Agritrans, an agricultural company dedicated to growing bananas. Agritans allegedly received over $700,000 in PetroCaribe money for a highway repair project, as did another corporation, Betex. Neither company executed the repairs they were paid for and the money remains unaccounted for. It is unclear why the government would pay a banana company to repair roads, or why two companies received funding for the same project, though they both appeared to be run by the same people. The court provided no evidence the two had plans to cooperate on the project; rather, both committed to building the same road entirely on their own.
Agritrans issued a statement last week condemning the report.

“Unexpectedly, this audit process was carried out without notice, interview or consultation of our books and archives, contrary to the requirements of the International Standards for Auditing,” the report read. “We also deplore the fact that no technical evaluation report by the Ministry of Public Works, Transport and Communications (MTPTC) has been produced in support of the CSC/CA’s findings on AGRITRANS S.A. This raises serious doubts. as to the objectivity of these conclusions.”

Haiti’s courts have been investigating potential embezzlement of PetroCaribe funds for years. In 2017, the Haitian Senate released a similar report finding that PetroCaribe funds had all but disappeared without any evidence of having been invested into the country. Last year, the Twitter hashtag #KotKòbPetwoKaribea (“Where is the PetroCaribe money?”) went viral after more damning revelations.

The PetroCaribe program, which provided cheap oil to impoverished countries in addition to development aid, has largely shut Haiti out in recent months. While some media outlets have blamed U.S. sanctions on the Venezuelan regime, the money began drying up shortly after Haiti voted along with most of the OAS to no longer recognize Maduro as the president of Venezuela following the expiration of his legal term in January. While Maduro still controls the military and occupies the presidential palace, his presence there is illegal according to the Venezuelan constitution. Haiti’s vote to recognize this broke years of fealty to the socialist regime on the world stage and closely preceded a shortage of Venezuelan oil in the Haitian market.

Venezuelan state television has ignored the protests in Haiti.