“Shitstorm! SCOTUS denied the stay in #RemainInMexico,” said a tweet from immigration lawyer Nicolette Glazer. “What is the practical consequences you ask? Complete destruction of US obligations com[p]liance under intn’t law.”

“Extremely disappointing,” tweeted Todd Schulte, who is president of FWD.us, which is Mark Zuckerberg’s pro-amnesty lobby group for investors. On August 20, he said the court’s endorsement of the Texas decision would be “a massive catastrophe.” 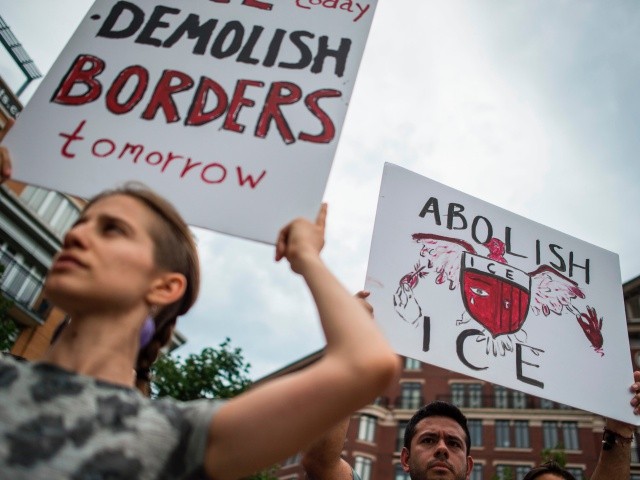 People hold up signs as they protest the U.S. Immigration and Customs Enforcement agency (ICE) and the detentions of illegal immigrants in Washington, DC. (ANDREW CABALLERO-REYNOLDS/AFP via Getty Images)

“A national disgrace,” said a journalist at the left-wing Mother Jones magazine, which is named after an Irish-born immigrant who opposed cheap-labor migration. “An atrocity in a series of atrocities.”

Progressives hate the MPP program because it stopped migrants and also broke the massively profitable economic machine that allowed the cartels — and U.S. lawyers — to profit from the delivery of illegal labor to U.S. employers.

The MPP program works by forcing migrants to wait in Mexico until they can ask a judge for asylum. This “Remain in Mexico” policy ensures that the cartels and coyotes cannot make money by sneaking illegal migrants into U.S. jobs. The program’s political and economic success was underlined in the second half of 2019 as the migrant inflow dropped to minimal levels — and wages rose for Americans in a tight labor market.

Biden ended the program in June, and he has since allowed at least 700,000 asylum-seeking migrants into the United States, including at least 400,000 job seekers. Unsurprisingly, wages for many Americans have declined amid the flood of labor amid cheers from business-funded advocates. A columnist for the Wall Street Journal wrote August 22:

“The asylum process is essentially our work-visa program,” Mr. Bier [David Bier, at Cato] told me by telephone on Friday. “We have some seasonal visas, but for any year-round job not requiring a college degree—for example construction, dairy or poultry processing—migrants are out of luck.”

The Supreme Court upheld the Texas courts’ order to the federal government that it should act in “good faith” to reestablish the MPP program and to stop its policy of releasing economic migrants into the United States. The decision by Judge Matthew J. Kacsmaryk has already been approved by a three-judge panel.

The Texas court ordered Biden’s deputies to restore the program because they had ended it without proper justification — and it also ordered the agency to comply with federal laws that require the detention of migrants.

The Supreme Court’s decision comes after Biden and his appointees allowed roughly 700,000 extra migrants to cross into the United States in 2021, under the weak claim that they are legitimate asylum seekers, not economic migrants.  This mass migration is being allowed despite federal immigration laws that are intended to protect American workers from employers who hire illegal workers. 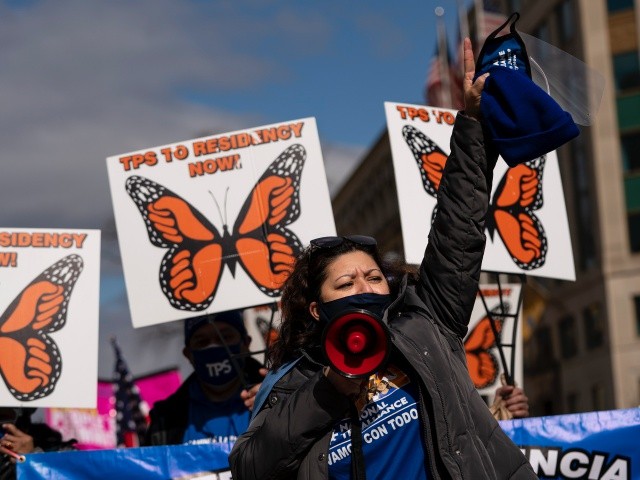 Activists and citizens with temporary protected status (TPS) march along 16th Street toward the White House in a call for Congress and the Biden administration to pass immigration reform legislation on February 23, 2021 in Washington, DC. (Photo by Drew Angerer/Getty Images)

The “good faith” clause will likely encourage much resistance from Biden’s pro-migration deputies, including DHS secretary Alejandro Mayorkas, a Cuban-born, pro-immigration zealot. In turn, DHS evasions will prompt more legal filings from the pro-American advocates and politicians who filed the Texas lawsuit.

For example, Mayorkas’ DHS posted a statement saying it “regrets that the Supreme Court declined to issue a stay.” The DHS statement continued:

DHS has appealed the district court’s order and will continue to vigorously challenge it.  As the appeal process continues, however, DHS will comply with the order in good faith.  Alongside interagency partners, DHS has begun to engage with the Government of Mexico in diplomatic discussions surrounding the Migrant Protection Protocols (MPP).

And then DHS doubled down on its much-explained plan to extract more workers, consumers, and renters from poor southern countries for use in the U.S. economy, saying “DHS remains committed to building a safe, orderly, and humane immigration system that upholds our laws and values. DHS continues to process individuals in accordance with U.S. law and our mission.”

Much of the invective aimed at the court came from the same lawyers and advocates who cheered when progressive judges torpedoed or set national injunctions on decisions set by Trump.

“Unbelievable,” tweeted MSNBC columnist Chris Geidner. “It truly is astounding that a Supreme Court majority is allowing this district court injunction to bind the federal government.”

“This is demented,” complained Mark Joseph Stern, a writer at Slate.com.

“The government must take all steps available to fully end this illegal program ([MPP], including by re-terminating it with a fuller explanation,” said a statement from the ACLU. “What it must not do is use this decision as cover for abandoning its commitment to restore a fair asylum system.”

“The lower court decision ignored many critical and devastating facts demonstrating that MPP was a humanitarian catastrophe,” said the American Immigration Council. “Asylum seekers were murdered, raped, kidnapped, extorted, and compelled to live in squalid conditions where they faced significant procedural barriers to meaningfully presenting their protection claims.”

But pro-American groups cheered the decision:

“This is a tremendous victory for our laws, our Constitution and our sovereignty — all three of which are under withering assault from the Biden Administration,” said a statement from Stephen Miller, a former top aide to Trump and the founder of America First Legal:

I salute Texas Attorney General Ken Paxton, a fearless and courageous defender of our nation, and Missouri Attorney General Eric Schmitt, for this historic win. America First Legal is immensely proud to be working alongside of, and in support of, Ken Paxton to uphold our nation’s immigration laws — and the sacred rights of our citizenry.

“We now have to watch if they implement this decision in actual “good faith.” The Biden Administration must prioritize the safety of Americans and the sovereignty of our nation before politics,” added Gene Hamilton, the vice president of America First Legal.

The case is Biden v. Texas, No. 21A21 in the Supreme Court of the United States.