Egypt’s government on Monday imposed a coronavirus vaccine mandate on all public sector employees and public university students, requiring them to present proof of vaccination as a prerequisite for entry into any state-owned building, Reuters reported.

A number of unidentified public sector employees in Cairo told Reuters on November 15 the new vaccine mandate caused long lines to form “at entrances to some state universities and government entities” in the national capital “as students and employees waited to show proof of vaccination.”

During a two-week transition period from November 15 to November 30, unvaccinated public sector workers have the option to present a negative coronavirus test result to their employers weekly. The alternative testing method will no longer be accepted starting December 1, when “members of the public will be unable to enter government offices without proof of at least one vaccine dose,” Reuters reported on Monday citing official statements by the Egyptian federal government.

“More than 14 million people in Egypt have had two [coronavirus] vaccine doses and nearly 27 million have had one,” Egyptian Acting Health Minister Khaled Abdel Ghaffar said on November 13.

Egypt’s government says it hopes to administer coronavirus vaccines to 40 percent of the country’s population, which is estimated at nearly 105 million, by the end of 2021. 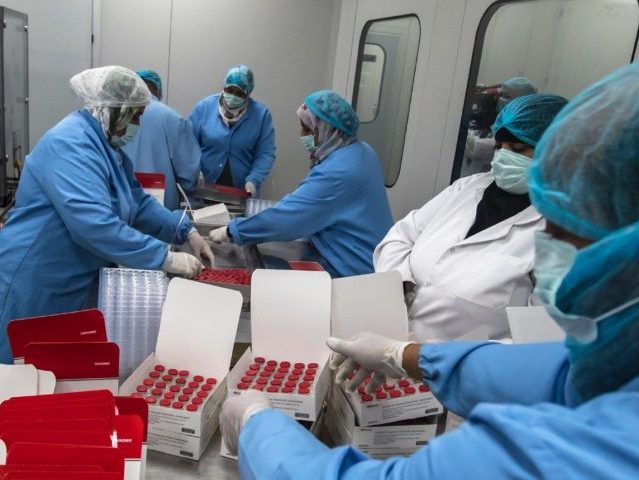 Laboratory workers fill boxes with vials of China’s Sinovac vaccine against the coronavirus, produced by the Egyptian company VACSERA, in the capital Cairo, on September 1, 2021. (Khaled Desouki/AFP via Getty Images)

Egypt’s government said on November 14 it had begun clinical trials on its own domestically developed coronavirus vaccine candidate, Covi Vax.

“The World Health Organization has previously recognized the Egyptian vaccine [Covi Vax] as one of hundreds of formulas around the world that are in development,” the Associated Press noted on November 14. “It works by including proteins from the original virus to provoke an immune response.”