The chair of the board of the American Association of Pro-Life Obstetricians and Gynecologists (AAPLOG) told Breitbart News a woman who obtains abortion reversal treatment after taking mifepristone, the first drug in a chemical abortion, “has a 68 percent chance of saving her child.”

Christina Francis, M.D., explained abortion pill reversal “is supported by a wealth of evidence and is based on the use of progesterone, a natural hormone, that is crucial to the support of early pregnancy.”

“AAPLOG believes in empowering women with the most up to date information about their medical care,” she said, adding:

This medication has been used by OB/GYNs for decades and has proven clinical safety for both women and their preborn children. If a woman begins a chemical abortion but changes her mind after taking the first drug, she has a 68% chance of saving her child with this treatment.

“As physicians who care for both of our patients, we fully support this evidence-based treatment,” Francis asserted.

The AAPLOG chair’s comments come as Lila Rose, president of pro-life organization Live Action, reported this week on tech giant Google’s decision to ban all of her group’s ads, “including those promoting the Abortion Pill Reversal treatment, a resource that has saved 2500 children to date.”

“The now-banned Abortion Pill Reversal ads had been approved by @Google & running for over 4 months, spending over $170,000 & directing 100s of moms to the abortion pill reversal hotline,” Rose tweeted. “Abortion activists knew the ads were making a difference, so they had Google shut them down.”

The now-banned Abortion Pill Reversal ads had been approved by @Google & running for over 4 months, spending over $170,000 & directing 100s of moms to the abortion pill reversal hotline

Abortion activists knew the ads were making a difference, so they had Google shut them down pic.twitter.com/fhHBqEYEg6

Former abortionist and now pro-life OB/GYN Dr. Anthony Levatino describes what occurs during a drug-induced abortion in the medical animation video below:

In a piece at the Daily Beast, Emily Shugerman hit Google and Facebook for running the abortion reversal ads. She wrote that a college freshman obtained a medication abortion, “a two-pill process that can successfully terminate most pregnancies before 10 weeks,” but “immediately regretted it.”

After completing her drug-induced abortion, Hagan reportedly decided to call the abortion reversal hotline to “reverse” her abortion.

Hagan is one of the faces of a $100,000-plus ad campaign run by anti-abortion organization Live Action, which advertises so-called “abortion reversal” as an effective means of reversing a medication abortion. In reality, the “method” is an unproven, potentially dangerous intervention that has never been approved by the FDA. The only independent study on it was halted after a quarter of the participants were hospitalized.

Other abortion activists, including actor Mark Ruffalo, followed along in line.

The actor pointed his followers to a petition from the Center for Countering Digital Hate (CCDHate) that calls on the tech companies to “stop showing paid ads for misleading health claims or unsafe products.”

CCDHate states abortion reversal “is known to cause severe hemorrhaging.”

“And Facebook is showing these ads to minors as young as 13 years old,” the site says.

However, in his New York Times bestseller, Breaking the News: Exposing the Establishment Media’s Hidden Deals and Secret Corruption, Breitbart News editor-in-chief Alex Marlow alerted his readers that CCDHate, a foreign-based organization, worked with NBC News and the Soros-funded Center for American Progress to blacklist right-of-center sites, such as ZeroHedge and The Federalist.

According to Newsweek, Google confirmed Wednesday it had blocked the abortion pill reversal ad.

“Under our ads policies, we do not allow ads that promote harmful health claims,” Google spokesperson Christa Muldoon told Newsweek. “This includes claims about the abortion reversal pill’s safety.” 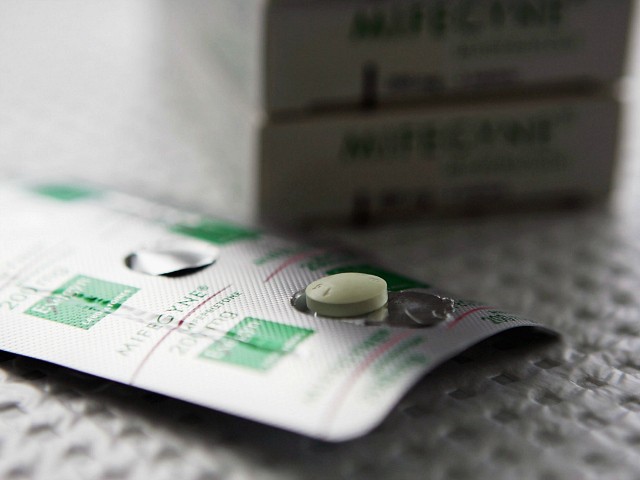 But Rose countered to Newsweek that Google based its decision on “pro-abortion ideology” and not “science.”

“The reality is that abortion pill reversal has worked for over 2,000 women using the FDA-approved bio-identical hormone Progesterone.”

In 2019, AAPLOG observed in its position statement on abortion reversal that progesterone is given to women utilizing in vitro fertilization (IVF) procedures to aid in carrying their pregnancies once the embryo is transferred to their wombs:

There is a very long and solid history of safety of the use of natural progesterone in pregnancy. Natural progesterone use in pregnancy for the last 50 years has not been associated with any increased risk of any birth defects. Mifepristone alone has also not, to date, been demonstrated to have any increased risk of birth defects. Thus, to date there does not appear to be any risk of birth defects to the unborn child from abortion pill reversal. And, abortion pill reversal offers another reproductive choice for women facing the abortion decision.

As LifeSiteNews reported, to make her point that abortion reversal is “unproven” and “potentially dangerous,” Shugerman cited a study led by abortionist Mitchell Creinin, a member of Physicians for Reproductive Health, who has received “compensation from Danco Laboratories, LLC, the distributor of mifepristone in the United States, for providing third-party telephone consults to clinicians who call for expert advice on mifepristone. the abortion pill manufacturer,” according to a 2013 study.

AAPLOG OB/GYNs Francis and Donna Harrison, M.D., noted in a press release the study “was aimed at examining the efficacy and safety of a now well used protocol for abortion pill rescue,” which “provides the possibility to save the unborn child if women change their mind after taking the first medication (mifepristone) of two that are involved with a medication abortion.”

The physicians explained further Creinin and his colleagues reported three patients in the study required a transfer to a hospital, two of whom needed emergency surgery, with one also needing a transfusion. 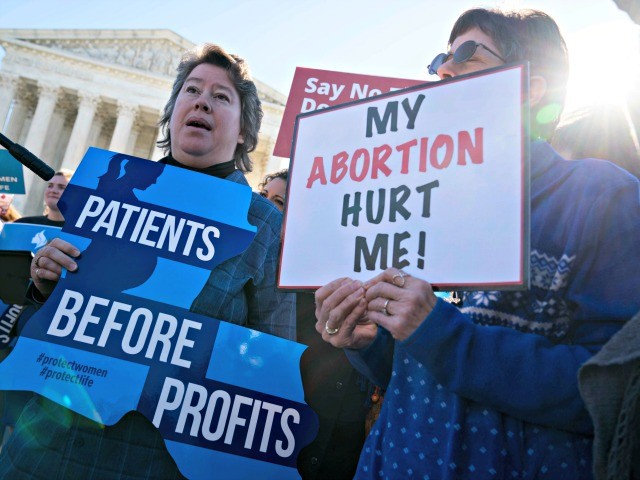 Pro-life activists participate in a rally outside of the Supreme Court as the justices hear oral arguments in the June Medical Services v. Russo case on March 4, 2020, in Washington, DC. (Photo by Sarah Silbiger/Getty Images)

“[T]he authors stopped the study due to ‘safety concerns,’” Francis and Harrison continued. “However, a more thorough review of their data tells a different story,” they said, elaborating:

First, what they fail to emphasize is the difference in the women who required transfer. Two out of the three patients were from the placebo group – not the group that received progesterone … This is a 40% significant hemorrhage incidence from mifepristone ALONE. Both of these women required emergent surgery to stop their bleeding and one required a blood transfusion. The third patient, who had received progesterone, essentially completed her medication abortion – ultrasound in the emergency department was consistent with a completed abortion and her bleeding was self-limited, not requiring surgery or transfusion. This amounted to a 20% hemorrhage rate (so actually, progesterone would appear to have a PROTECTIVE effect against hemorrhage, though the numbers are small).

“These findings are consistent with what we’ve long known about mifepristone, which is that it increases the risk of significant hemorrhage from the uterus due to its physiologic effects of vasodilation and inhibition of platelet aggregation,” Francis and Harrison added. “This increased bleeding risk due to mifepristone was also demonstrated in a recent NEJM study advocating the addition of mifepristone to misoprostol for the management of first trimester spontaneous abortion.”

“Of note, Dr. Mitchell Creinin is an author on both studies,” the doctors wrote.

Francis and Harrison then observed that, perhaps more importantly, the first study failed to take note of the efficacy of progesterone to save pregnancies after taking mifepristone, the first abortion drug in a chemical abortion.

“Of the 5 women in the progesterone treatment group, 4 had healthy pregnancies two weeks after taking mifepristone – that’s an 80% success rate!” the physicians reported. “In the placebo group, only two women had an ongoing pregnancy (40%).”

This study by Dr. Creinin confirms two things that we have previously known but the abortion industry refuses to acknowledge. First, mifepristone is a dangerous medication for both women and their unborn children. It is precisely for this reason that we support the FDA REMS that control the prescription and use of this medication and oppose any efforts to remove them. Second, the use of progesterone for pregnancy rescue is an effective option for women who change their minds after taking mifepristone and desire a chance to save the life of their unborn child.

“As compassionate healthcare providers, it would be unethical for us to withhold this treatment from women seeking it given the information we have,” they asserted. “All women’s healthcare physicians, regardless of their feelings about abortion, should be able to agree on this.”