Rev. Jesse Jackson and his wife, Jacqueline, have been hospitalized after testing positive for the coronavirus, the Associated Press (AP) reported Sunday.

“Jesse Jackson, 79, is vaccinated against the virus and received his first dose in January during a publicized event as he urged others to receive the inoculation as soon as possible. He and his wife, 77, are being treated at Northwestern Memorial Hospital in Chicago,” the outlet noted. 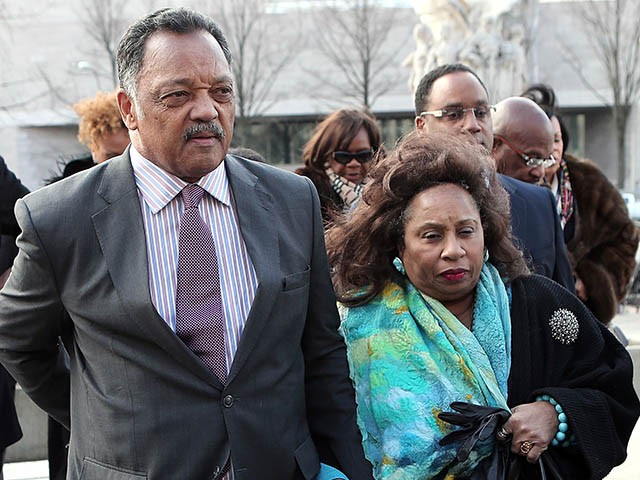 Rev. Jackson’s Rainbow PUSH Coalition shared a statement on its Twitter page regarding the couples’ illness.

“Doctors are currently monitoring the condition of both. Anyone who has been around either of them for the last five or six days should follow the CDC [Centers for Disease Control and Prevention] guidelines,” the statement read:

Both @RevJJackson, Sr. & @MrsJacquelineL3 are in the hospital after having tested positive for COVID-19. We are grateful for all of your prayers and get well-wishes. pic.twitter.com/WrMyFAMPzJ

Meanwhile, the Chicago Department of Public Health (CDPH) recently announced the return of the city’s mask mandate applying to indoor public settings after lifting the rule for fully vaccinated individuals in May, Breitbart News reported.

“Per the CDPH, masks will be required in all indoor public settings and apply to those two and older, whether they are vaccinated or not. The mandate applies to bars, restaurants, gyms, and common areas of residential buildings,” the outlet said.

In addition, Surgeon General Vivek Murthy claimed Sunday during an interview on CNN’s State of the Union vaccine requirements at businesses and colleges were “a very reasonable thing to do”:

One thing some states have been doing, to create a safer school environment, requiring that employees in the school, including teachers and other staff, are vaccinated as well. To create a safer environment for our kids. All of these are reasonable. When we’re faced with the most transmissible variant we’ve seen to date, the Delta variant, when we have our kids essentially is the point of concern in their schools and health and well-being on the line, we have to take every step we can.

“I think these measures, these requirements we’re seeing, are absolutely reasonable. I think they will help,” he concluded.