ROME, Italy — Pope Francis denounced war and the arms trade Thursday, calling on people of faith to “condemn every form of violence.”

“War plays games with human lives,” the pontiff told a gathering of leaders from different religious traditions. “So does violence and the bane of a burgeoning arms trade, often moving in the shadows, fed by underground streams of money.” 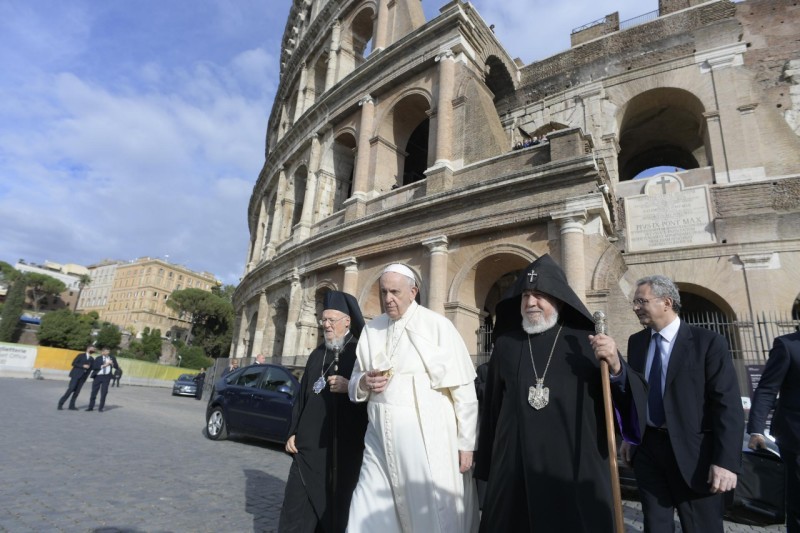 Pope Francis attends the Prayer for Peace Meeting alongside Ecumenical patriarch Bartholomew I of Constantinople and Egyptian Islamic scholar and the current Grand Imam of al-Azhar mosque, Sheikh Ahmed Al-Tayeb, organized by the St. Egidio Community: “Peoples as Brothers, Future Earth. Religions and Cultures in Dialogue” at the Piazza del Colosseo in Rome, Italy, on Thursday, October 7, 2021. (Photo provided by Vatican)

War is “a failure of politics and of humanity, a shameful capitulation, a stinging defeat before the forces of evil,” he insisted, adding that we “cannot continue to accept wars with the detachment with which we watch the evening news.”

The pope urged people of faith to be uncompromising in denouncing every sort of violence.

“Dear brothers and sisters, as believers it is our responsibility to help eradicate hatred from human hearts and to condemn every form of violence,” he said. “Let us unambiguously urge that arms be set aside and military spending reduced, in order to provide for humanitarian needs, and that instruments of death be turned into instruments of life.”

Believers must be known for “opposing war and death in the name of the One who is peace and life,” Francis said. “Fewer arms and more food, less hypocrisy and more transparency, more vaccines distributed fairly and fewer weapons marketed indiscriminately.”

Ordinary people are “weary of violence,” he declared, and those who have responsibility for the common good must “commit themselves not only to condemn wars and terrorism, but also to create the conditions to prevent them from flaring up.”

As he has done on other occasions, the pope suggested that nationalism is a catalyst of armed aggression.

“We cannot allow the lives of entire peoples to become mere pawns in a game of power,” he said. “The life of peoples is not part of a game: it is something serious and of concern to everyone.” 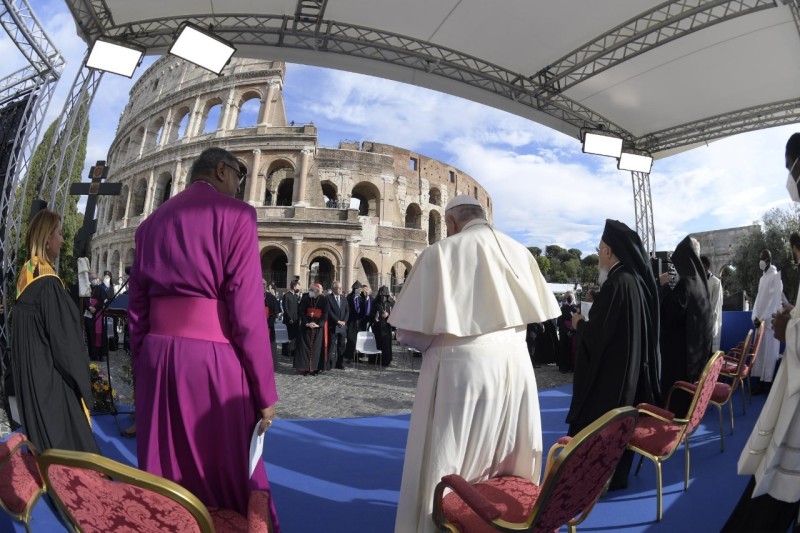 Pope Francis attends the Prayer for Peace Meeting organized by the St. Egidio Community: “Peoples as Brothers, Future Earth. Religions and Cultures in Dialogue” at the Piazza del Colosseo in Rome, Italy, on Thursday, October 7, 2021. (Photo provided by Vatican)

“The life of peoples cannot be subject to the interests of a few, or prey to sectarian and nationalistic fervor,” he added.

Today, the poor and the voiceless “are fearful,” he stated, “because in all too many parts of the world, rather than dialogue and cooperation prevailing, military confrontation is once again becoming the decisive means for imposing one’s own ends.”

What is needed, the pope urged, is “to demilitarize the human heart,” especially through the power of prayer.

“Many, many believers have come together in these days to show how prayer is that quiet source of strength which brings peace and disarms hate-filled hearts,” he said.

“For the sake of peace, please, in every religious tradition let us defuse the temptation to fundamentalism and every tendency to view a brother or sister as an enemy,” he exhorted.