ROME, Italy — Pope Francis has reacted to a report on clerical sex abuse in France, expressing his own shame and that of the Church for the failure to effectively address the problem.

The lengthy report, released Tuesday, was conducted by an independent commission charged with evaluating “the extent of the phenomenon of sexual aggression and violence committed against minors since 1950 to the present,” the pope said following his General Audience Wednesday morning.

“To the victims I wish to express my sadness and my pain for the traumas they have endured and my shame, our shame, my shame that for so long the Church has been incapable of putting this at the center of its concerns, assuring them of my prayers,” he said.

The pontiff went on to reiterate the matter of shame, while urging that important lessons be drawn from past mistakes.

“I pray, and let us all pray together: ‘To God the glory, to us the shame’: this is a moment of shame,” he said. 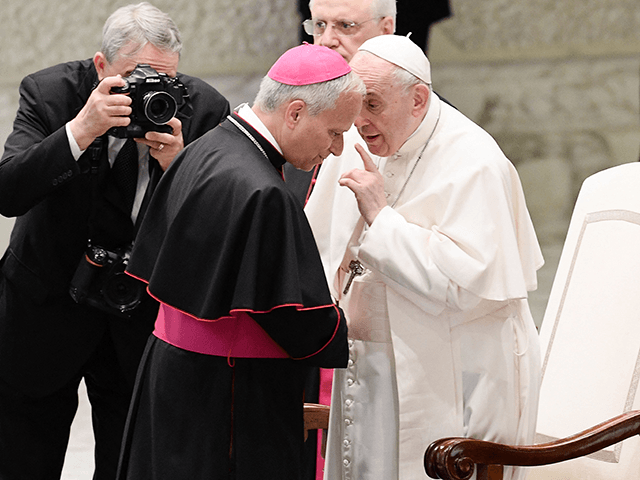 Pope Francis speaks with French bishop Pierre-Yves Michel during the weekly general audience on October 6, 2021 at Paul-VI hall in the Vatican. (Photo by FILIPPO MONTEFORTE/AFP via Getty Images)

“I express my closeness and fatherly support to the priests in France in the face of this trial which is difficult but beneficial, and I invite the Catholics in France to assume their responsibility to guarantee that the Church might be a safe home for everyone,” he concluded.

In his preliminary analysis of the France report, Catholic League president Bill Donohue offered several important observations to better understand the nature and scope of the problem.

Over the 70-year period from 1950-2020, approximately 3,000 molesters allegedly abused an estimated 216,000 minors, the report states. “Contrary to some news stories, not all were priests: one-third of the offenses were committed by those who worked in Catholic schools, youth programs, and other agencies,” Donohue clarified.

Providing important context, Donohue also observed that 2.5 percent of the French clergy and lay Catholics working for the Church since 1950 were accused of sexually abusing minors, which makes up “less than four percent of all such abuse in France.”

Moreover, the bulk of the abuse took place between 1950 and 1968, in the midst of the sexual revolution, he added.

Echoing the results of similar studies of clerical sex abuse, the report found that 80 percent of the alleged victims were boys, making the problem overwhelmingly one of homosexual behavior, Donohue noted.

The president of the independent commission, Jean-Marc Sauvé, said much the same thing, observing, “We can say with a high degree of certainty that within the Catholic Church, the abuses mainly concerned men and not women, unlike society.”