Rome — Pope Francis praised Hungarian Jews and Christians in his visit to Budapest Sunday for striving to view each other and work together “as brothers and sisters.”

While noting that the threat of antisemitism is “still lurking in Europe and elsewhere,” the pontiff declared that the best way to defuse it “is to work together, positively, and to promote fraternity” as Jews and Christians are doing in Hungary.

“I express my appreciation for your efforts to break down the walls that separated us in the past,” the pope stated. “Jews and Christians alike, you strive to view one another no longer as strangers but as friends, no longer as foes but as brothers and sisters.”

“This change of outlook is blessed by God; it is a conversion that makes possible new beginnings, a purification that brings new life,” he added.

Pope Francis is not the only observer to praise Hungary for its treatment of the Jewish people. In 2018, David P. Goldman wrote that while signs of violent anti-Semitism are on the rise across Europe, Hungary stands out as uniquely safe for Jews.

Jewish life isn’t just flourishing in Budapest, Goldman writes, it’s “roaring,” and on any given Friday evening, Budapest’s Keren Or synagogue hosts two hundred people for dinner. About 100,000 Israelis have dual Hungarian citizenship, he observed, and many Israelis own property and vote in Hungarian elections.

Hungarian Prime Minister Viktor Orbán is one of Israel’s few steadfast supporters in the European Union, Goldman wrote, and Hungary, along with Rumania and the Czech Republic, vetoed a European Community resolution condemning the U.S. for moving its embassy to Jerusalem.

Orbán looks to Israel as an example, Goldman declared, since Hungary is a small nation at risk of “demographic extinction” during the next century, and Israel is a small nation that has maintained its identity despite enormous forces against it.

While Orbán has often been criticized for resisting Brussels-imposed immigration quotas, it turns out that controlling who comes and goes in one’s country is an effective antidote to ethnic attacks, Goldman suggested.

“There are no risks to Jews because there are very few Muslim migrants,” was Goldman’s politically incorrect assessment of the situation.

Elsewhere in Europe, Muslim migrants “are the sole source of violent attacks on Jews,” which is an essential reason why Hungary is distinctly safe, he said. 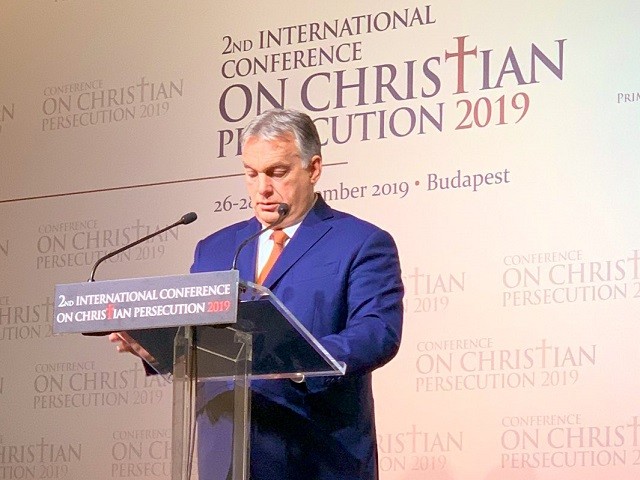 Prime Minister Viktor Orbán told a packed hall in the capital Hungary is proud of its Christian heritage and will do all in its power to defend its Christian identity. (Tom Williams/Breitbart News)

“Hungary is the safest European country for Jews, with no anti-Semitic violence of any kind in recent years,” he asserted.

There is nothing inherently anti-Semitic about campaigning against “a plutocrat who is trying to buy your country,” Goldman wrote.

Orbán ran a very effective billboard campaign against the multibillionaire, which had nothing to do with his being nominally Jewish, Goldman stated.

Goldman noted that Soros is one of the most invested supporters of mass migration, especially through his Open Societies foundations, and he has spent some $600 million in Hungary, “the equivalent in relative GDP of spending $60 billion in the United States.”

“If an expatriate billionaire had spent that amount of money in the United States, one would expect politicians to campaign against him,” he added.

In 2019, Mr. Orbán went on the offensive against his critics, noting how mass migration has increased anti-Semitism in Western Europe but not in Hungary.

“Hungarian Jews enjoy the protection of the government. Also, we conduct a consistently pro-Israeli foreign policy,” Orbán said. “Because we are convinced that the existence of a Jewish state is not only important for European Jews but that the security of Israel is a key question for the stability of Europe.”

“Today antisemitism has assumed a new character: The enmity against Jews and against Israel is carried into our societies by migration,” Orbán said, noting that anti-Semitism is on the rise in Western Europe while it decreases in Central Europe, which has resisted mass migration.

Mr. Orbán has insisted on recognizing Hungary’s Christian identity, insisting that a clear identity is the best defense against radicalism.