After The Satanic Temple announced its opposition to the Texas anti-abortion law, leftists have embraced the cult as a potentially helpful ally in the cause to keep abortion legal.

At Salon.com, Brett Bachman argued Satanists “may be the last, best hope to save abortion rights in Texas”:

As pro-choice and reproductive health groups are scrambling to make sense of Texas’ new, near-total abortion ban that went into effect this week, it appears their efforts to skirt the law are getting an unexpected boost from one organization in particular: The Satanic Temple. 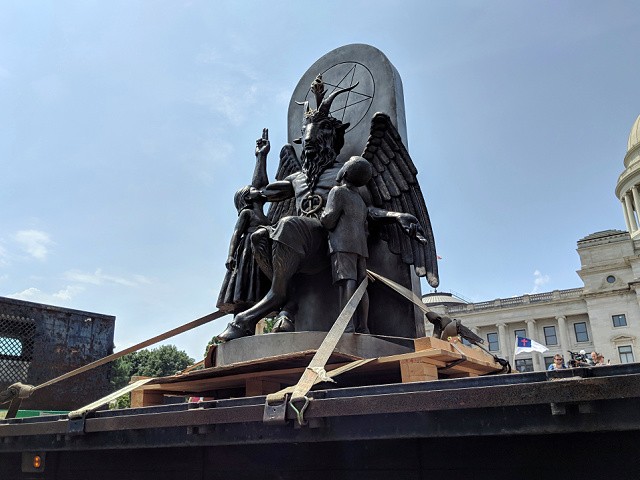 The Satanic Temple unveils its statue of Baphomet, a winged-goat creature, at a rally for the first amendment in Little Rock, Ark., Thursday, Aug. 16, 2018. The Satanic Temple wants to install the statue on Capitol grounds as a symbol for religious freedom after a monument of the Biblical Ten Commandments was installed in 2017. (AP Photo/Hannah Grabenstein)

Bachman was referring to a letter The Satanic Temple wrote to the U.S. Food and Drug Administration (FDA) arguing its members should be allowed to purchase abortion pills in Texas under the Religious Freedom Restoration Act (RFRA) so as to be used in what the Temple referred to as their “Abortion Rituals”:

I am sure Texas Attorney General Ken Paxton — who famously spends a good deal of his time composing press releases about Religious Liberty issues in other states — will be proud to see that Texas’s robust Religious Liberty laws, which he so vociferously champions, will prevent future Abortion Rituals from being interrupted by superfluous government restrictions meant only to shame and harass those seeking an abortion.

The battle for abortion rights is largely a battle of competing religious viewpoints, and our viewpoint that the nonviable fetus is part of the impregnated host is fortunately protected under Religous Liberty laws.

Other left-wing outlets were as equally gleeful in their support of The Satanic Temple’s fight to keep abortion legal. “Satanic Temple Floats Devilishly Clever Strategy To Dodge Texas Abortion Law,” stated a headline from HuffPost. “Why Satanists may be the last hope to take down Texas’s abortion bill,” echoed Fortune. 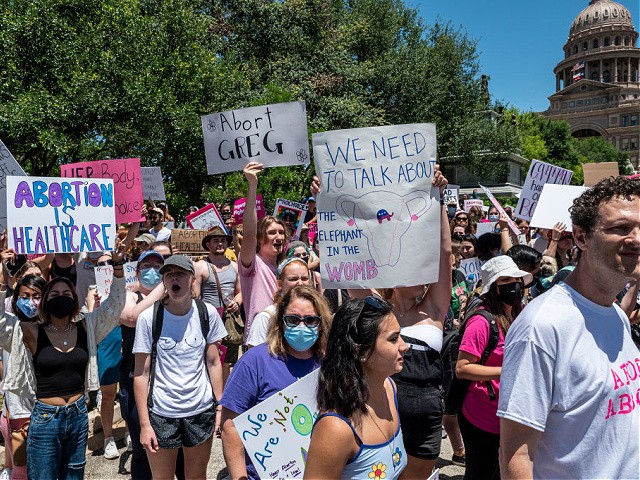 AUSTIN, TX – MAY 29: Protesters hold up signs as they march down Congress Ave at a protest outside the Texas state capitol on May 29, 2021 in Austin, Texas. Thousands of protesters came out in response to a new bill outlawing abortions after a fetal heartbeat is detected signed on Wednesday by Texas Governor Greg Abbot. (Photo by Sergio Flores/Getty Images)

In 2020, following the death of Supreme Court Justice Ruth Bader Ginsburg, a woman wrote an op-ed in HuffPost exclaiming that she joined The Satanic Temple, believing that they are the best force in America to keep abortion rights alive:

I believe that the Satanic Temple ― and its members’ dedication to fighting for true freedom ― represents our best, last defense against anti-choice lawmakers who are seeking to assert power over women’s bodies and take away our right to choose, We need creative, resolute thinkers who are willing to stand up for what they believe in and take concrete action to do so, and the Satanic Temple is full of those kind of people. I am proud to now count myself among their ranks.

The Satanic Temple bills itself as a non-theistic organization dedicated to reason and uses Satanic imagery as little more than a tool to troll Christians.

“The mission of The Satanic Temple is to encourage benevolence and empathy among all people, reject tyrannical authority, advocate practical common sense, oppose injustice, and undertake noble pursuits,” the organization says on its website.