It has been over a week since more than 17 inches of rain swept through Humphreys County, Tennessee, taking the lives of 20 residents and hurting many more.

Although it was the worst disaster to ever hit Waverly, neighbors said the floodwaters also brought out the best in residents, WKRN reported Saturday.

One kind gesture came from an anonymous donor who offered to pay the funeral costs for each of the flood victims and the Luff-Bowen Funeral Home was one of the recipients.

Director Lindsey Barker said the funeral home already had some donations to alleviate the cost, but the man insisted on covering it. 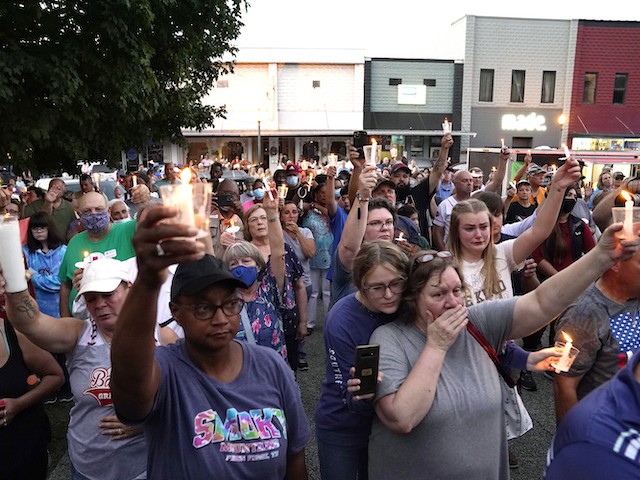 Residents cry and console each other during a community memorial service on the Courthouse Square on August 27, 2021, in Waverly, Tennessee. The memorial service was held to remember the victims of the flooding on August 21st. (Larry McCormack/Getty Images)

“We assured these families, that whatever donations came in, if there was a balance, they were not going to [owe] anything, and the anonymous donor, he knew that as well and he didn’t care and he wanted to make sure it was paid in full,” Barker explained, adding, “Families are so forever grateful and appreciative of that.”

Luff-Bowen Funeral Home was overseeing six of the funerals, and Barker said families were overwhelmed when told about the anonymous donor’s gift.

“It’s love; it’s love here and from our neighbors,” she stated. “He actually maybe lived out of town at one time but he is actually a Waverly local now, he lives here, and that’s just who we are. We are family and he took care of them.”

Video footage showed the aftermath of the flood:

Meanwhile, volunteers have been working nonstop to help the community get back on its feet and Compassion Church Waverly said approximately 1,000 people showed up to help.

The church has helped tear out sheetrock and flooring from about 50 homes and planned to do more.

“Not only they may not have lost someone, but they’ve lost everything in their home… and they’re still hanging on and they’re still saying God’s still good; that’s how you keep going on,” Carson Plant, the disaster relief project manager, stated.