ROME — The Caritas office of the Argentinian diocese of Venado Tuerto apologized this week for posting a prayer to Pachamama, an Andean deity, on its social media.

“The Pachamama is a symbol of fertility, the earth and the sanctity of life,” reads the since deleted August 1 post. “It is a myth full of spiritual meaning that can be used fruitfully.”

“Some religious festivals have sacred meanings and are occasions for meeting and fraternity,” the post continued. “These are the new paths for the Church and for the realization of a holistic ecology. Holy Father Francisco. #somoscaritasarag #caritasvt #equipomagrevenadotueto.” 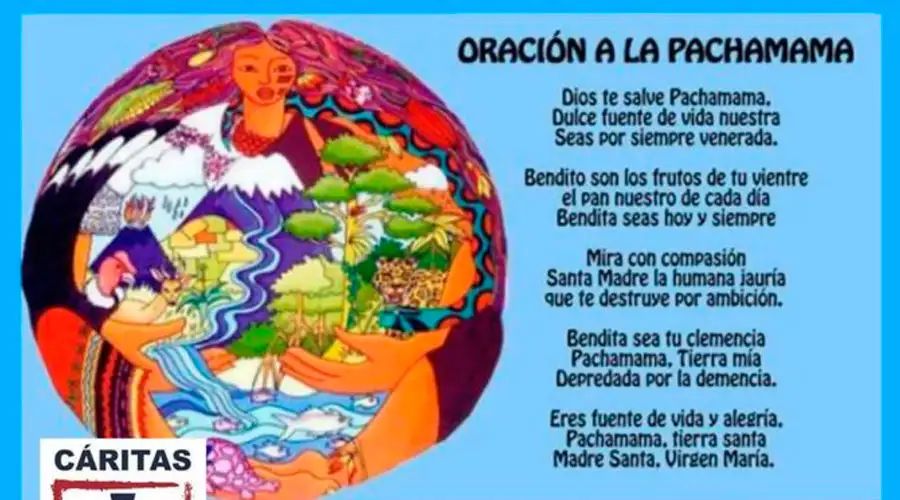 The prayer’s posting sparked massive pushback on social media, resulting in its removal.

The prayer, which rhymes in the original Spanish, reads:

Hail Pachamama, sweet source of our life, may you be venerated forever.

Blessed are the fruits of your womb, our daily bread, may you be blessed now and forever.

Holy Mother, look with compassion upon the human pack that destroys you out of ambition.

Blessed be your clemency, Pachamama. Earth of mine, pillaged out of madness.

You are the source of life and joy. Pachamama, holy earth, Holy Mother, Virgin Mary.

Pachamama Day is celebrated annually on August 1 in the Quechua and Aymara communities of the Andes in Argentina, Bolivia, Colombia, Chile, Ecuador and Peru in honor of the Andean deity.

“We would like to apologize to those who were offended by our post on the Pachamama, whose intention was to convey our communion with Francis who in the Apostolic Exhortation Querida Amazonia says to us:”

It is possible to take up an indigenous symbol in some way, without necessarily considering it as idolatry. A myth charged with spiritual meaning can be used to advantage and not always considered a pagan error. Some religious festivals have a sacred meaning and are occasions for gathering and fraternity, albeit in need of a gradual process of purification or maturation. A missionary of souls will try to discover the legitimate needs and concerns that seek an outlet in at times imperfect, partial or mistaken religious expressions…

Such a spirituality will certainly be centered on the one God and Lord, while at the same time in contact with the daily needs of people who strive for a dignified life

In October 2019, painted wooden figurines depicting a naked pregnant woman, described variously as representing fertility statues, the goddess Pachamama, Mother Earth, and “Our Lady of the Amazon,” were presented to Pope Francis at a prayer ceremony in the Vatican gardens and subsequently transferred to a nearby church, Santa Maria in Traspontina.

In response, the former chief of the Vatican’s doctrinal office, Cardinal Gerhard Müller, said that Amazonian “idols” should never have been placed in a Catholic church in the first place, noting that “idolatry is a grave sin.”

Not long after the four statuettes were installed in the church, two unidentified men removed them and proceeded to march them to the nearby Tiber River, where they tossed them off a bridge into the water.

There once was a small, wooden idol,
But no one agreed on her title,
Some deemed an end wettish,
Might best serve this fetish,
Which earned her aquatic requital. pic.twitter.com/WYJFHvmQQr

For his part, Pope Francis defended placing the Pachamama figures in the church and apologized for their removal and dunking in the Tiber.

The pope confirmed that the statues represent Pachamama, an Andean fertility goddess also known as Mother Earth, but said that they had been installed in the Catholic church of Santa Maria in Traspontina “without idolatrous intentions.”

“I would like to say a word about the statues of Pachamama that were removed from the church in the Traspontina, which were there without idolatrous intentions and were thrown at the Tiber,” the pope said.

“First of all, this happened in Rome and as bishop of the diocese I ask forgiveness of the people who have been offended by this gesture,” he declared.

“I also wish to tell you that the statues, which created so much media hype, were found in the Tiber. The statues are not damaged,” he said, adding that this was “good news.”