A group of concerned Catholics attends every Fairfax County Public School board meeting to pray the rosary.

Marybeth Style began her prayer crusade a year and a half ago with the group Pray for Our Schools when, as she told Breitbart News, “Marxists took over the school board.” On Thursday evening, six Catholics gathered in front of Luther Jackson Middle School in Fairfax, Virginia.

The board, which meets every other week, is criticized for teaching Critical Race Theory. The Thursday meeting had an unusually high turnout, as protesters came for a “Stop CRT Rally,” followed by counter-protesters who supported CRT and the LGBT agenda.

For years, the group of Catholics would go into school board meetings to speak, but as Style said, “They weren’t listening. We’d even say to them, ‘You won’t even look at us when we’re talking to you,’ and they still would not even look at us.”

Pray for Our Schools then started saying the rosary outside before each school board meeting.

When the Chinese coronavirus became a pandemic in March, Style found the positive aspect of school closures. Style said the group publicized their prayer meeting in the Parish bulletin for their meeting that week on St. Joseph’s Day, Thursday, March 19, 2020. On Monday, the schools closed down.

“We believe Our Lady intervened to protect the children. The only way to protect them was to keep them out of schools” and allow parents to see what their children are learning, according to Style.

“All the other schools in the country were opening up again, but not Fairfax county. They couldn’t get their act together. They were exposed for the frauds that they are. We’re spending millions of dollars here, and they couldn’t even go on Zoom,” Style said. 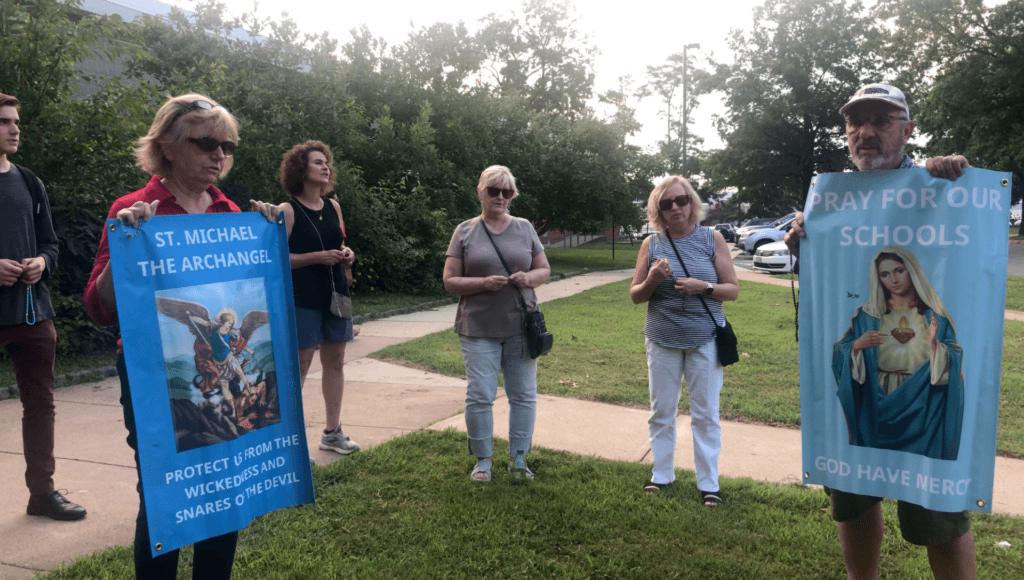 Pray for Our Schools gathers to pray the rosary before a Fairfax County Public School Board meeting on July 15, 2021 (Madeleine Hubbard/Breitbart News).

Breitbart News also reported that before the meeting Thursday, a Fairfax NAACP leader said, Let them die,” referring to those against her leftist ideology.

Last month, a Fairfax County Public School board member stirred up controversy when she encouraged graduating students to remember their “jihad.”