After waiting several days for authorities to ensure that reentry was safe, the clergy responsible for the Church of the Ascension in Santiago, Chile, reentered the iconic Catholic building along with Chile’s Tele 13 on Wednesday to find the inside completely hollowed out and vandalized with Satanic and leftist graffiti.

The Church of the Ascension and another Santiago church, the Church of San Francisco de Borja, both burned nearly to the ground on Sunday in arson attacks that followed mass leftist protests in the capital. The marchers were observing the anniversary of widespread violence throughout the city in response to a proposed subway fare hike last year.

Following the first violent protests last year, in which rioters burned down subway stations and also targeted Catholic sites, the local government canceled plans to raise the subway fares. Rioters then began to demand an entirely new constitution, arguing that the one in place was established during the rule of General Augusto Pinochet. The constitution was significantly amended and democracy in the country expanded following Pinochet’s call to democratic elections in 1989.

Center-right President Sebastián Piñera ceded to the demands of leftist rioters and has organized a national referendum asking Chileans if they would like to keep their constitution, scheduled for Sunday.

Santiago’s churches have become collateral damage in the fight for progressivism in Chile, as the Catholic Church has not taken any overt stance on the issues that rioters allege have triggered the violence, such as the subway proposal or mounting student debt. There is no clear correlation between burning down a church and promoting the establishment of a new constitution.

The destruction of the Church of the Ascension, built in 1876, made global news headlines for the dramatic images it produced of the churches spire crashing down to the ground, engulfed in flames. 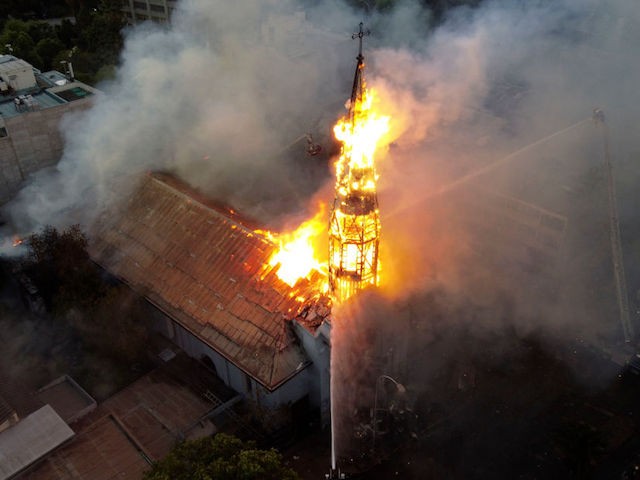 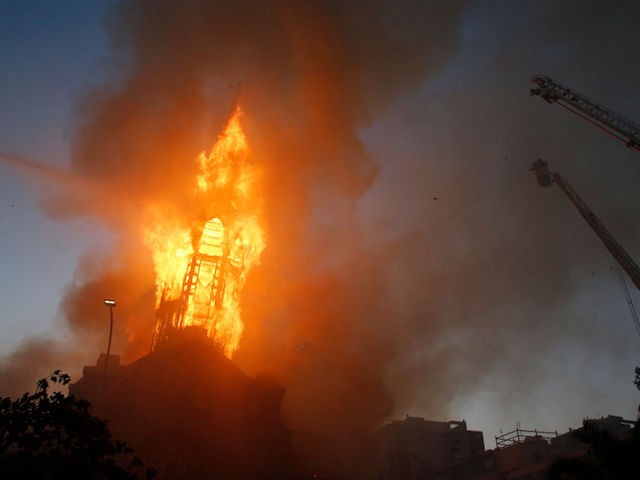 On Wednesday, with permission of the clergy, Tele 13 revealed the aftermath of the attack. Most of the remaining church walls appear covered in graffiti. Some of it is leftist messaging — “ACAB,” or “all cops are bastards,” appears on one wall, and its numeric equivalent, “1312,” on another. Much of it is anti-Catholic, words like “pedophiles” and “degenerates.”

On one wall, the graffiti reads, “since God doesn’t exist, you are all disposable.”

Another wall boasts satanic imagery, including an inverted cross with the numbers “666” surrounding it and a pentagram. According to the Church of Satan, the Sigil of Baphomet, which prominently features a pentagram, is the “prime symbol for Satanists.” Satanists may also casually use inverted crosses.

“666 is not part of Satanism per se, but since the public consciousness of it these days is as a Christian symbol of the ‘Antichrist,’ we are happy to have addresses or phone numbers which include it as it stirs Christians to reactions which entertain us,” the Church of Satan adds of the number.

The remains of the Church of the Ascension — according to Francisco Llanca, vicar of the central metropolitan zone of Santiago — are in a delicate state and, given the lack of structural integrity, it may not be possible to repair the damage.

The report described the damage as “million-dollar” and noted that the absence of the church also has an economic impact on the community. Tele 13 interviewed a man who identified himself as the church gardener and said that he cried when he saw the church in flames, not just because his house of worship is destroyed, but because his gardening tools were in the building, so he cannot work anywhere else.

The church’s pastor, Pedro Narbona, told the Catholic News Agency on Wednesday that he hoped his community would help combat “so much destruction, so much hatred and revenge” with faith.

“This is a living place … [where people] trust that Jesus Christ the Good Shepherd leads them through dark valleys and we fear nothing,” Narbona said. “The certainty and the strength that it gives us now is that, without hatred, without revenge, we may open our hearts to deeply reflect on the Chile that we want to build.”

The Church of San Francisco de Borja suffered similar damage, in part because it is considered the home church of the Carabineros, Chile’s national police. Photos from inside the burning building show graffiti reading “death to the Nazarene,” meaning Jesus, and anti-police slogans. 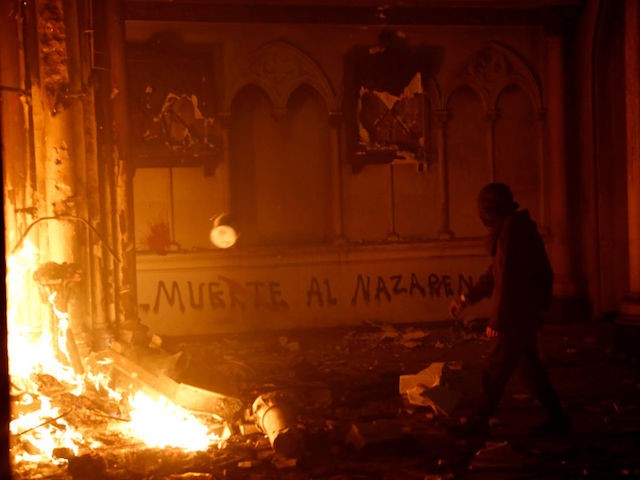 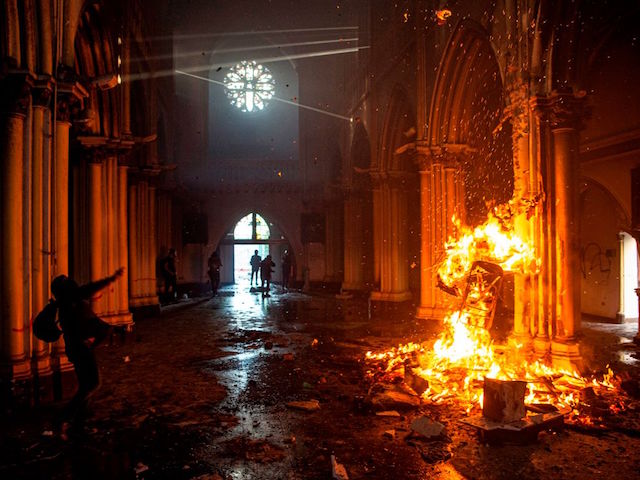 Police announced on Monday that they had arrested 580 people nationwide over the weekend for engaging in violence on the anniversary of the riots, 287 of them in the Santiago metropolitan area. The Chilean Navy confirmed that at least one of those arrested was a corporal officer in the military branch and that he is suspected of having participated in the burning of the Church of San Francisco de Borja. Police documented 15 lootings of businesses and 116 policemen injured. The Carabineros reportedly deployed 40,000 officers across the country.