In just over a week, several western European countries have seen incidents of violence, including an attack on police officers in France on Monday by an Algerian migrant yelling “Allahu Akbar.”

Since the end of October European states Italy, France and Germany have all seen violence perpetrated by men from migrant backgrounds, and in some cases, attackers professing “Allahu Akbar,” or “God is Great” as they struck.

On October 31st in the Italian city of Piacenza, a 32-year-old man — an Egyptian national and already subject to a deportation order —  pulled out a knife and repeatedly shouted “Allahu akbar” after being approached by police who believed he was acting suspiciously.

According to the Italian newspaper Il Giornale, the officers attempted to calm the Egyptian down but he created panic in a popular city square filled with Haloween party-goers as he brandished his blade. He then made attempts to stab those passing by him, with one city refuse collector stabbed and a police officer attempting to subdue the migrant stabbed too.

Both injured parties were treated at hospital for non-life-threatening injuries. Italian populist lawmaker Matteo Salvini deplored the fact the Egyptian, who had already been ordered to be deported, could be in Italy to attack members of the public in the first place. “In our country there is no room for criminals and fanatics”, he wrote, also sharing social media footage of the attack.

A knifeman who shouted "Allahu Akbar… France is ruled by the Islamic State" was shot by police in Paris on Monday evening https://t.co/rIpCbgKNyv

Just a day after the Italy attack, another knifeman yelling “Allahu Akbar” was shot by police at the Saint-Lazare railway station in Paris when he threatened members of the SUGE, the force in charge of security at the country’s railway stations.

According to reports, the man yelled “Allahu Akbar… France is ruled by the Islamic State” after arguing with officers and brandishing his weapon.

Broadcaster Franceinfo stated that the man was born in 1974 and while he was known to police for previous acts of violence, he was not on any of the country’s anti-terrorism watchlists.

An investigation was opened into the incident by the Paris judicial police but the anti-terrorist prosecutor’s office had not been involved with the case as of November 2nd.

On Saturday, November 6th, a 27-year-old Syrian man was arrested by German police after going on a knife rampage aboard an Intercity-Express (ICE) train between Regensburg and Nuremberg, injuring four men.

Three of the men aged 26, 39 and 60 years old were said to be seriously injured as a result of the attack.

German newspaper Bild noted that the Syrian had come to Germany in 2014.

The paper identified the migrant as Abdalrahman A. — in line with normal German privacy laws — reporting he had been granted asylum status in Germany and had previously lived in the city of Passau on the Austrian border.

Officials have asserted that the attack is not believed to have been motivated by terrorism, and have blamed the knifeman’s mental health for the stabbings.

Upper Palatinate Police Chief Norbert Zink commented on the attack on Sunday saying, “The motive of the suspect is still unclear. However, initial expert assessments point to psychological impairments.”

“After the arrest, we arranged for a psychiatric expert to be called in. For the examination of culpability and the application for an arrest warrant or even a detention order,” Senior public prosecutor Gerhard Neuhof said.

Attacks on passengers on high-speed trains, with large numbers of captive would-be victims, are becoming more familiar. In 2017 another migrant, in that case from the Gambia, attacked a passenger aboard an intercity train between Offenburg and Karlsruhe with a knife.

Yet another similar attack took place in 2016 when a 17-year-old Afghan migrant went on a rampage with an axe aboard a train near Wurzburg, injuring four people before he was later shot and killed by police. In France in 2015 an Islamist extremist attempted to launch a terror attack on a high-speed train in France, but did so without realising two off-duty American soldiers were on board. The Americans, working with a British and a French passenger, worked to subdue the would-be killer.

On the same day as the train knife attack by the Syrian migrant in Germany, a 24-year-old man was arrested in the French city of Lyon at around midnight after taking out a knife and approaching three police officers in an unmarked car in the Villeurbanne area and behaving aggressively toward them.

According to reports, the man gave out incoherent statements and was arrested by the three officers who took him back to a local police station where the man yelled “Allahu Akbar” and behaved erratically until police subdued him with a taser.

In 2019, an Afghan migrant went on a knife rampage in the same area of Lyon, leaving a teenager dead and nine others injured.

Algerian Migrant Attacks French Police “In Name of the Prophet” 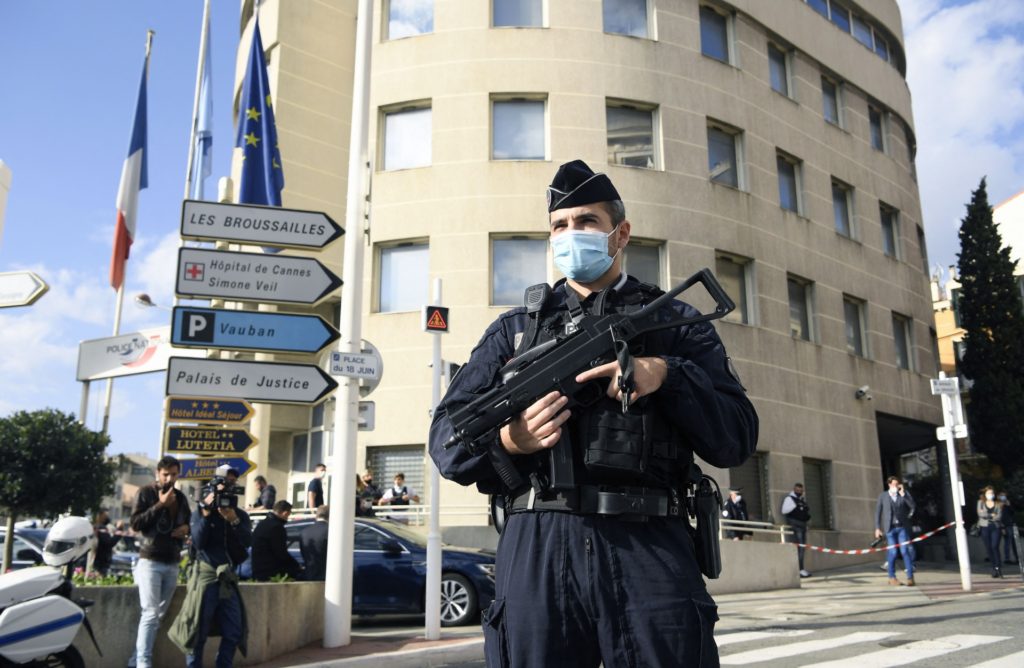 On Monday, a 37-year-old Algerian migrant was shot by police in the southern French city of Cannes after attacking several officers inside a vehicle with a knife.

The Algerian attempted to stab one of the officers in the chest, according to a report from French broadcaster BFMTV, and then reportedly made another attempt to attack a different officer, before the two officers in the back of the car exited the vehicle and opened fire on the Algerian.

During the attack, the Algerian, who was not previously known to French police and was not on an anti-terrorism watchlist, is alleged to have claimed he was acting “in the name of the prophet,” according to France24.

None of the officers were seriously injured in the attack and were discharged from hospital later in the day.

Sonia Fibleul, the spokeswoman for the National Police, stated, “They have been released from the hospital but are suffering the backlash of this cowardly attack.”

The migrant is believed to have arrived in Europe in either 2009 or 2010 and had a residency permit in Italy but was allegedly attempting to apply for residency in France since 2016.

French Interior Minister Gérald Darmanin stated that the Algerian had applied for several weeks for a French residency card but had not been granted one.

The migrant was taken to hospital after being shot by the officers he attacked and was subsequently released from treatment into police custody. Two other men, who are close to the alleged assailant, have also been arrested. A terrorist motive is being considered by investigators but the investigation has not yet been officially taken over by counter-terror police.

Italian newspaper Il Giornale has identified the Algerian as Lakhdar Benrabah and reported Matteo Salvini had drawn a comparison between the individual and the Nice terror attacker who killed three people last year at the city’s basilica. That migrant had also come through Italy to reach France before launching his attack.