LONDON (AP) – Leaders from across the political spectrum came together Saturday to pay tribute to a long-serving British lawmaker who was stabbed to death in what police have described as a terrorist incident.

Prime Minister Boris Johnson, the leader of the main opposition Labour Party, Keir Starmer, and the non-partisan speaker of the House of Commons, Lindsay Hoyle, arrived at the church where David Amess was stabbed multiple times while meeting with constituents. A 25-year-old man is in custody for the attack.

The politicians went up to the front of Belfairs Methodist Church individually to pay their respects to the Conservative lawmaker, who had been a member of the British Parliament since 1983. After laying flowers, they returned to their vehicles, escorted by a police convoy. They did not stop to talk to reporters.

In a statement early Saturday, the Metropolitan Police described the attack as terrorism and said the early investigation “has revealed a potential motivation linked to Islamist extremism.” 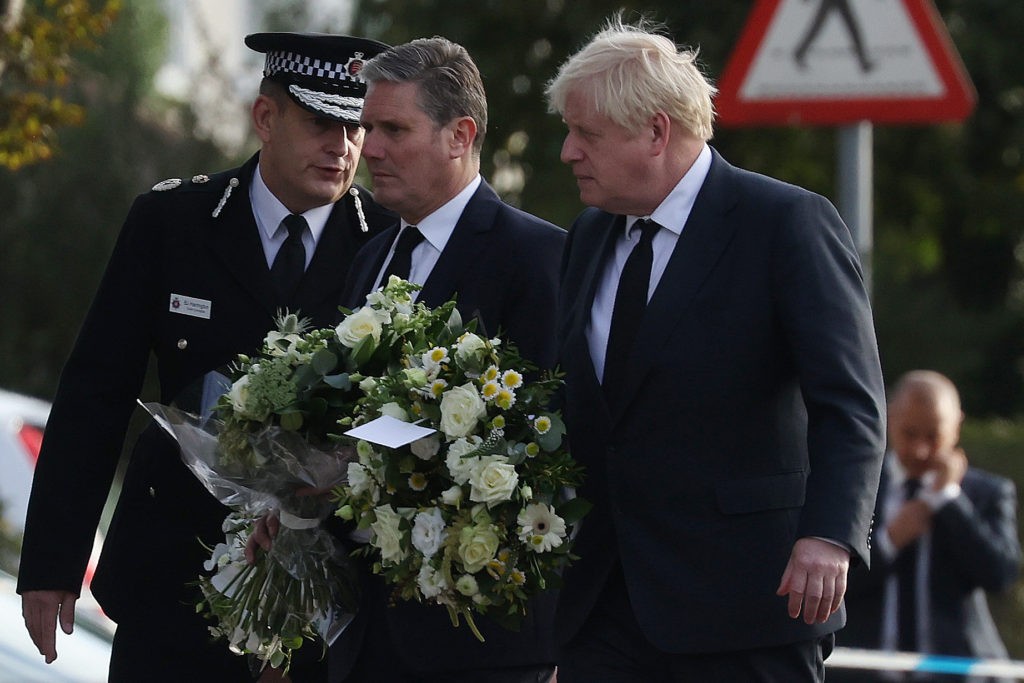 LEIGH-ON-SEA, ENGLAND – OCTOBER 16: (L-R) Keir Starmer, leader of the Labour Party, and Boris Johnson, Prime Minister lay flowers at Belfairs Methodist Church on October 16, 2021 in Leigh-on-Sea, United Kingdom. Counter-terrorism officers are investigating the murder of Sir David Amess, the Conservative MP for Southend West, who was stabbed to death during his constituency surgery yesterday around midday. A man in his twenties was arrested at the scene. (Photo by Hollie Adams/Getty Images)

Amess, 69, was attacked around midday Friday at a Methodist church in Leigh-on-Sea, a town about 40 miles (62 kilometres) east of London. Paramedics tried without success to save him. Police arrested the suspect and recovered a knife.

They did not identify the suspect, who was held on suspicion of murder. Police said they believed the suspect acted alone, and were not seeking anyone else in connection with the killing, though investigations continue.

The Metropolitan Police said an “early investigation has revealed a potential motivation linked to Islamist extremism,” but the department did not provide any details about the basis for that assessment.

The slaying came five years after another MP, Jo Cox, was murdered by a far-right extremist in her small-town constituency, and Amess’ killing has renewed concern about the risks politicians run as they go about their work representing voters. British politicians generally are not given police protection when they meet with their constituents. 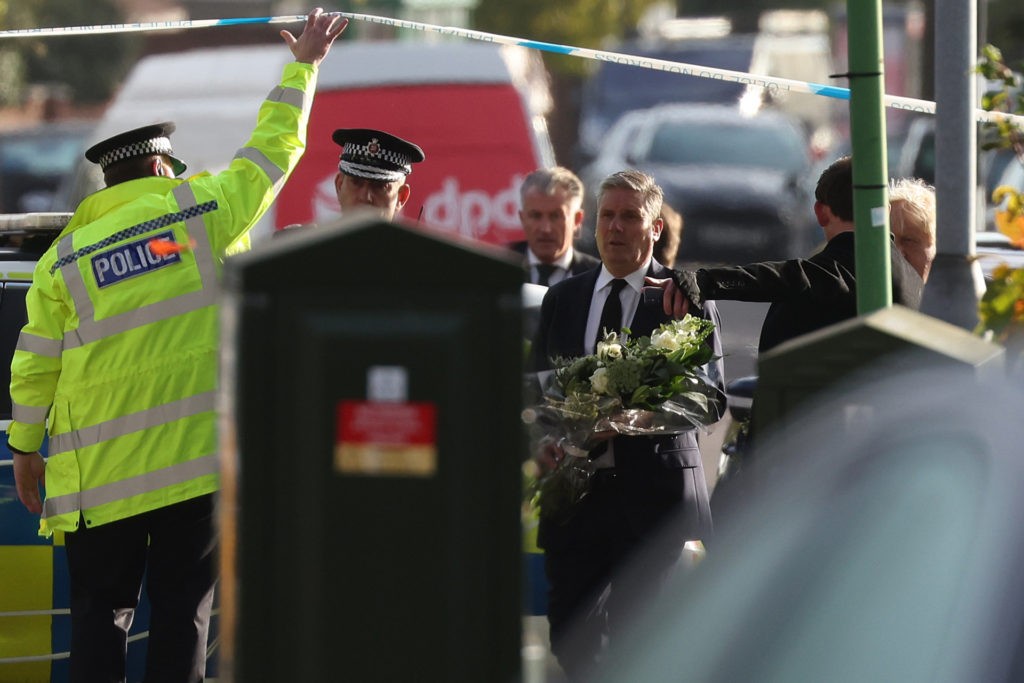 LEIGH-ON-SEA, ENGLAND – OCTOBER 16: (L-R) Keir Starmer, leader of the Labour Party arrives to lay flowers at Belfairs Methodist Church on October 16, 2021 in Leigh-on-Sea, United Kingdom. Counter-terrorism officers are investigating the murder of Sir David Amess, the Conservative MP for Southend West, who was stabbed to death during his constituency surgery yesterday around midday. A man in his twenties was arrested at the scene. (Photo by Hollie Adams/Getty Images)

Veteran Labour lawmaker Harriet Harman said she planned to write to the prime minister to ask him to back what is known as a Speaker’s Conference to review the safety of parliamentarians.

“I think that, while we anguish about this dreadful loss, we can’t just assert that nothing should change,” Harman told BBC radio. “I don’t think anybody wants to go to a situation where the police are vetting individual constituents who come and see us, but I’m sure there is a safer way to go about our business.”

Under a Speaker’s Conference, the speaker brings together political parties and authorities to come up with non-partisan recommendations. They occur rarely, about once every 10 years. 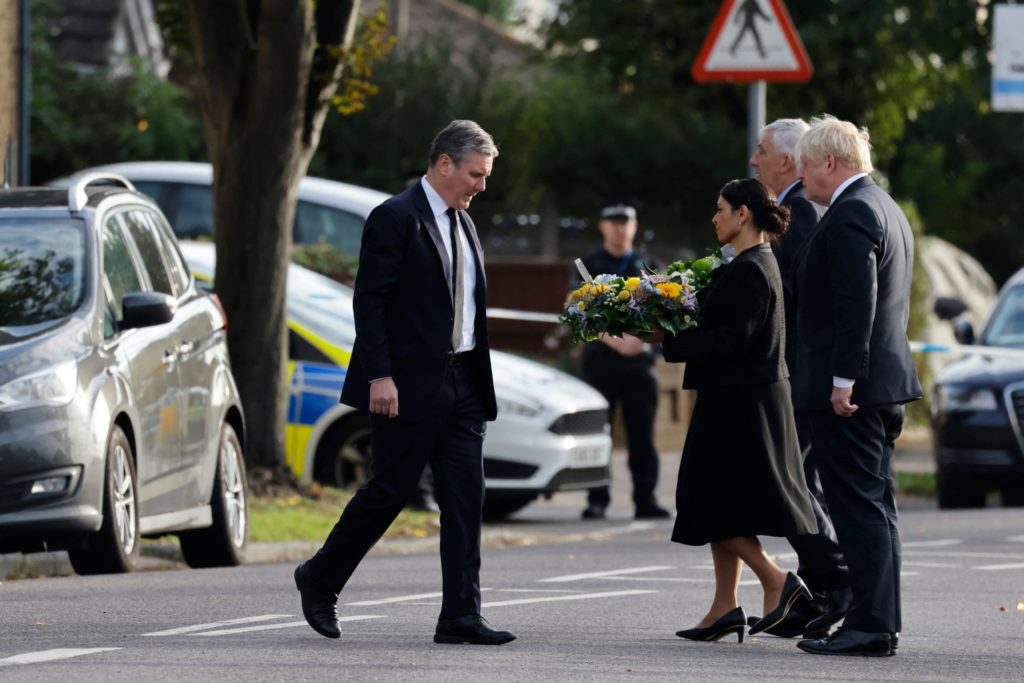 Britain’s main opposition Labour Party leader Keir Starmer ,(L), Britain’s Home Secretary Priti Patel (C) and Britain’s Prime Minister Boris Johnson lay floral tributes at the scene of the fatal stabbing of Conservative British lawmaker David Amess, at Belfairs Methodist Church in Leigh-on-Sea, a district of Southend-on-Sea, in southeast England on October 16, 2021. – Conservative British lawmaker David Amess was killed on Friday after being stabbed “multiple times” during an event in his local constituency in southeast England, in the second death of a UK politician while meeting voters since 2016. Local police did not name Amess but said a man had been arrested “on suspicion (of) murder” after the stabbing in Leigh-on-Sea. (Photo by TOLGA AKMEN/AFP via Getty Images)