TORONTO, Canada: Populist People’s Party of Canada (PPC) leader Maxime Bernier is confident his party will win seats in Canada’s federal election on Monday and believes the PPC will force other parties to enter a debate on freedom.

Bernier is a well-known critic of coronavirus lockdowns as well as the vaccine passport, and his PPC is the only major party running in the federal election to outright oppose both policies.

Speaking to Breitbart News at an event by Lake Ontario, Mr Bernier said that he was confident that some of the PPC’s candidates will win seats in Monday’s election, “So now the mainstream political parties, the Conservative and the Liberals, they won’t be able to ignore us anymore like the mainstream media.”

Some polls have put the PPC as high as 12 per cent nationally across Canada — higher than the separatist Bloc Quebecois and the Green Party — but the first-past-the-post system could mean that, despite support from over one in ten voters, the party may not win individual constituencies.

The populist-right UK Independence Party (UKIP) experienced similar difficulties in the United Kingdom, for instance in the 2015 British elections where it got 12.6 per cent of the national vote and yet only got one Member of Parliament elected, with their millions of votes buying them 120 second-place results nationwide.

When asked if he would support electoral reform if the party polled well but did not pick up any seats in the House of Commons due to the first-past-the-post system, the PPC’s Bernier stated that he had no plans to add such a policy to the PPC platform, but that he was confident some candidates would win seats. 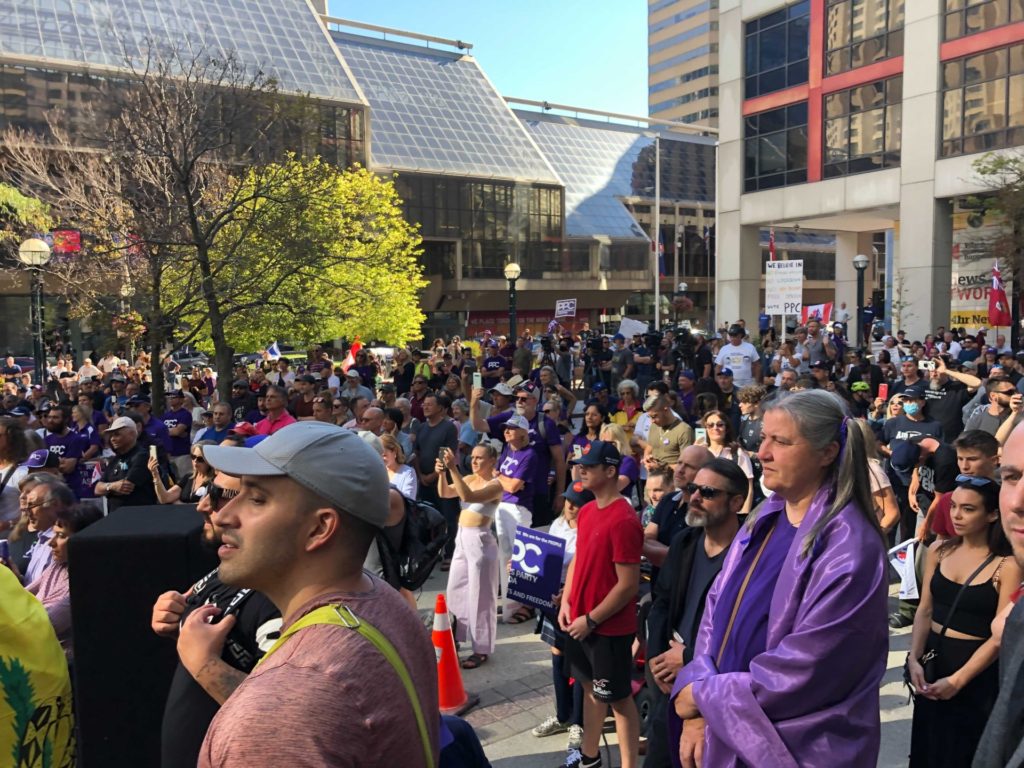 A crowd of hundreds gather outside the headquarters of Canada’s public broadcaster CBC during a People’s Party of Canada (PPC) event. (Photo: Chris Tomlinson/Breitbart London)

When asked if he planned to expand the PPC into provincial politics, Mr Bernier said that he blamed the federal government for incentivising the provincial governments to introduce the measures, noting that Prime Minister Justin Trudeau had promised a billion dollars to help provinces implement vaccine passport programmes.

“We will cut that,” Bernier said, adding: “That was the incentive to why provinces were able to impose lockdowns and covid passports right now.” 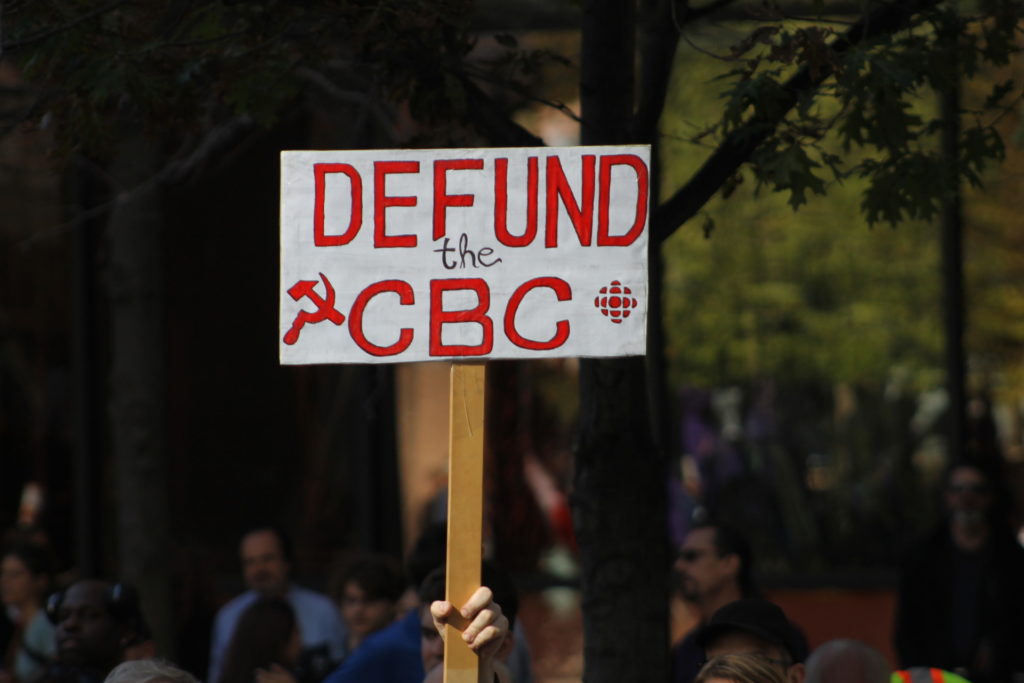 A protester holds a sign outside of CBC headquarters during a People’s Party of Canada (PPC) event. (Photo: Chris Tomlinson/Breitbart London)

“[T]he federal government has an authority. What we will do is stop all that but also we have a moral authority to make sure our charter of rights and freedoms is respected in this country,” Bernier continued, vowing that the party would bring provinces to court.

“What they are doing is illegal, unconstitutional, immoral, unfair, and, yes, we will defend our constitution and bring every single provincial government to court for what they’re doing to Canadians,” he said.

Later in the day, Bernier addressed a crowd of hundreds outside of the offices of the CBC in downtown Toronto at a rally calling for the defunding of Canada’s public broadcaster, the BBC-like CBC, along with several other speakers who also opposed coronavirus lockdowns, vaccine passports, and mandates.

Bernier and the PPC’s rise in this election has been contrasted by a lacklustre campaign by Prime Minister Justin Trudeau’s Liberals, particularly in the early weeks of the election campaign.

Trudeau, who previously held a minority government in the House of Commons, has been questioned by many over the timing of the election, especially during the pandemic.

Writer and long-time Canadian political commentator Rex Murphy called the election “pointless” and criticised Trudeau for calling the election as many believe the Liberal leader did so simply to try and get a majority in parliament amid positive polling.

“If such was the thinking, and we have been given no grounds to assume any differently — two weeks in the Liberals have given no substantial reason for why this thing was called — then it is a grotesque misreading of the Canadian electorate. It is the thinking of political charlatans, opportunistic before all else,” Murphy wrote.

Polling released on Friday, September 17th from Mainstreet Research, put the Conservative Party of Canada (CPC) at 32 per cent — ahead of Justin Trudeau’s Liberals at 30 per cent, followed by the far-left New Democratic Party (NDP) at 20 per cent and the PPC at 8 per cent.

In the Quebec seat of Beauce where PPC leader Bernier is standing, polls put him second behind the current Conservative MP Richard Lehoux, with Bernier attempting to pull off an upset and take back the former seat he lost in 2019.

Anyone who doesn't support disgraced blackface enthusiast Justin Trudeau is a…wait for it… https://t.co/7CvievkTHH