The European Court of Human Rights has ruled against the family of a severely ill two-year-old Jewish girl, holding that doctors are allowed to withdraw treatment, over her family’s objections, and despite other treatment options overseas.

Alta Fixsler has severe brain damage after being born eight weeks premature in 2018. Even though both Israel and the United States have offered to treat Alta, the European Court of Human Rights sided with U.K. courts, agreeing that it is in the two-year-old’s “best interests” to withdraw treatment, thus ending her life.

As Hasidic Jews, Alta’s parents argued that withdrawing treatment is both against their faith and their rights as parents.

Medical professionals with the Manchester University National Health Service (NHS) Foundation Trust believe Alta will never recover. The U.K. Court argues that allowing Alta to travel for treatment will expose her to pain, even though doctors cannot confirm she experiences pain. Alta has been on a ventilator and feeding tube her entire life, and she has seizures.

Alta and her parents Abraham and Chaya are both Israeli citizens, and Abraham is an American citizen. Then-Israeli President Reuven Rivlin wrote a letter in June to Prince Charles, asking him to intercede on Alta’s behalf. He wrote in the letter, as reported by Yeshiva World:

It is the fervent wish of her parents, who are devoutly religious Jews and Israeli citizens, that their daughter be brought to Israel. Their religious beliefs directly oppose ceasing medical treatment that could extend her life and have made arrangements for her safe transfer and continued treatment in Israel.

I know that representations have been made to HM [Her Majesty’s] Government on this matter, but I feel that the unique circumstances warrant a personal intervention on my part to you. It would be a tragedy if these parents’ wishes could not be accommodated in a way that respects both the law and their religious beliefs. 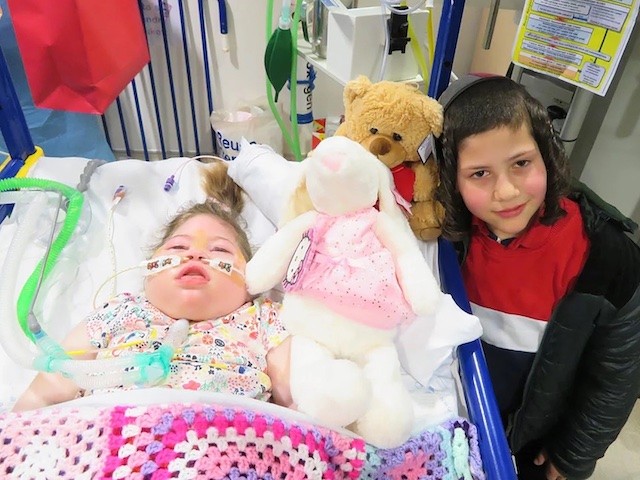 Alta Fixsler’s brother visits her in the hospital. (Family Photo)

The High Court argued that, “Alta is not of an age, nor in a condition to have knowledge of and to adopt her parents’ values.” Therefore, her parent’s religious objections had no bearing on the Court’s decision. This is unacceptable.

It is unconscionable that the British government is usurping the role of parents and disregarding the sincere religious objections of the family.

Sen. Chuck Schumer (D-NY) obtained a visa for Alta in July to go to the United States for treatment.

Last week, Democrat Sens. Schumer, Bob Menendez (NJ), Kristen Gillibrand (NY), Cory Booker (NJ), Tom Carper (DE), Tammy Duckworth (IL), and Richard Blumenthal (CT) wrote a letter to the British ambassador to the United States, Karen Pierce, asking for her to work with them to “facilitate the travel of Alta Fixsler from the UK to the United States, where care for her is waiting.”:

Many senators wrote about this including @CoryBooker and @SenatorMenendez who sent a letter to @UKinUSA.

Rep. Lee Zeldin (R-NY) issued a press release Wednesday on the dire issue. He said, “It is not up to doctors and European judges to determine that this young girl has no right to continue fighting for her life.”

Judaism recognizes the sacred value of every human life. Once a child has been placed on a ventilator, Jewish law unequivocally prohibits deliberately discontinuing the ventilation so as to hasten the approach of death, as this is akin to murder. Similarly, to deny food to any person is simply a cruel act. We appeal to the good conscience and high ethical standards of Britons to respect the child’s religious traditions, and permit the helpless child to be transferred to a facility in America or to Israel willing to continue to provide the highest standards of medical care. [Emphasis added]

This is not the first time the U.K.’s socialized healthcare system has chosen to end a child’s life despite desperate pleas from parents. Even though parents were able to take ill 10-month-old Charlie Gard to the U.S. for treatment in 2017, HM Government still elected to withdraw life support and end Charlie’s life.

Alfie Evans was a toddler with a rare neurodegenerative condition. At the direct invitation of Pope Francis, the Vatican offered to treat Alfie. Alfie’s parents fought with the U.K. Courts to take him to the Vatican, with all expenses paid by the church. Ultimately, the NHS also ended Alfie’s life in 2018.