The Hungarian government has shown FNC’s Tucker Carlson how and why it stops illegal immigration dead at its southern border “wall”.

The conservative news show host, who is currently broadcasting from Hungary, visited the Central European country’s southern border “wall” — actually a fence, constructed rapidly as hundreds of thousands of migrants were marching into the country following German leader Angela Merkel’s unilateral decision to open Germany’s borders and by extension Europe’s to a wave of unregulated mass migration in 2015 — to see how it has largely put an end to illegal border crossings. 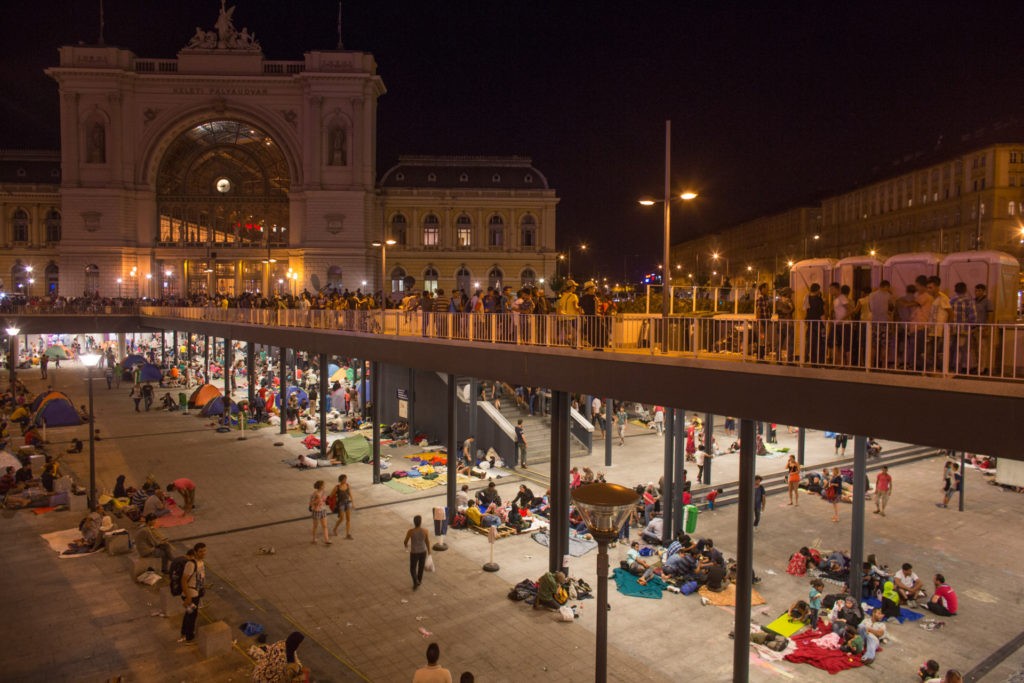 BUDAPEST, HUNGARY – SEPTEMBER 01 2015: Migrants gather in the transit zone near Keleti station in central Budapest on September 1, 2015 in Budapest, Hungary. The station was closed amid what was said to be an attempt by the Hungarian government to uphold EU law and restore order after chaotic scenes at the station. According to the Hungarian authorities a record number of migrants from many parts of the Middle East, Africa, and Asia crossed the border from Serbia earlier in the week, said to be due in part to the erection of a new fence due to be completed at the end of the month. Since the beginning of 2015 the number of migrants using the so-called Balkans route had exploded with migrants arriving in Greece from Turkey and then travelling on through Macedonia and Serbia before entering the EU via Hungary. The massive increase, said to be the largest migration of people since World War II, led Prime Minister Victor Orban to order Hungary’s army to build a steel and barbed wire security barrier along its entire border with Serbia, after more than 100,000 asylum seekers from a variety of countries and war zones had entered the country so far that year. (Photo by Matt Cardy/Getty Images) 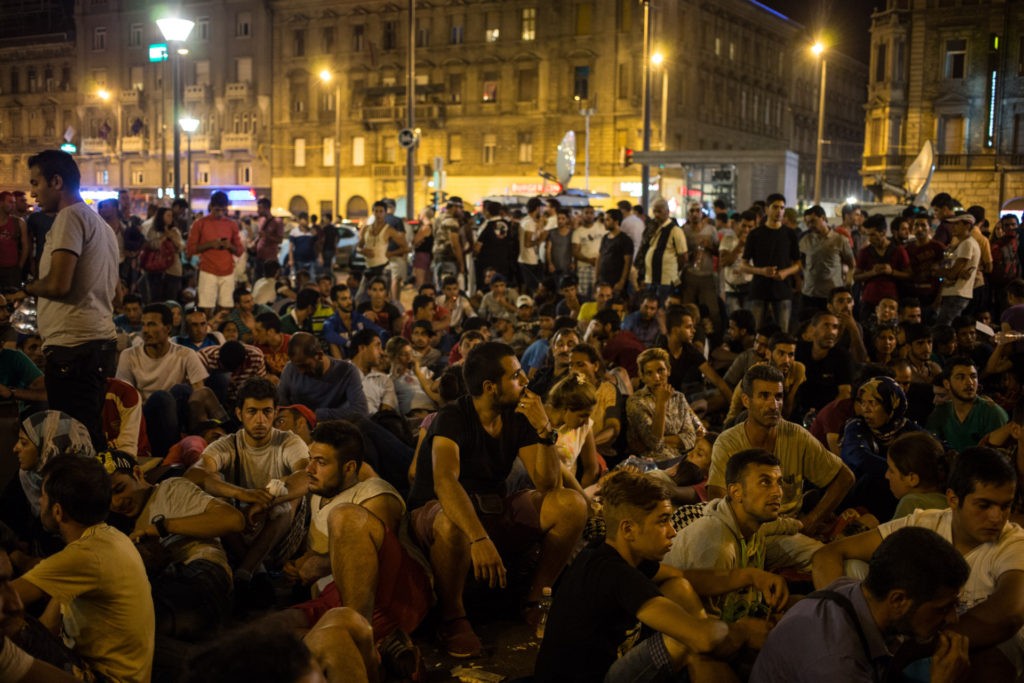 “Europe is controlled by the EU, which is effectively controlled by Germany. No one says it out loud, but really, it’s the German Empire, and at the time [of the 2015 migrant crisis] it was run by the German Chancellor, Angela Merkel, and she decided to keep the doors open,” Carlson opined.

“She said that accepting more than a million migrants in her country was not a big deal at all, quote: ‘Germany is a strong country. We will manage.’ Well, of course, she was completely wrong. That decision changed the nature of Germany forever,” he continued.

“It caused a massive crime spike — yes, that’s true and proven — and in general, disrupted the entire region… But there was one country in Europe that decided not to play along with this disaster. It’s not coincidental that that country is hated by the same ideologues in Washington who pushed the Iraq War, the same people who helped cause this problem are angry at a man called Viktor Orbán who is the democratically elected Prime Minister of Hungary.” 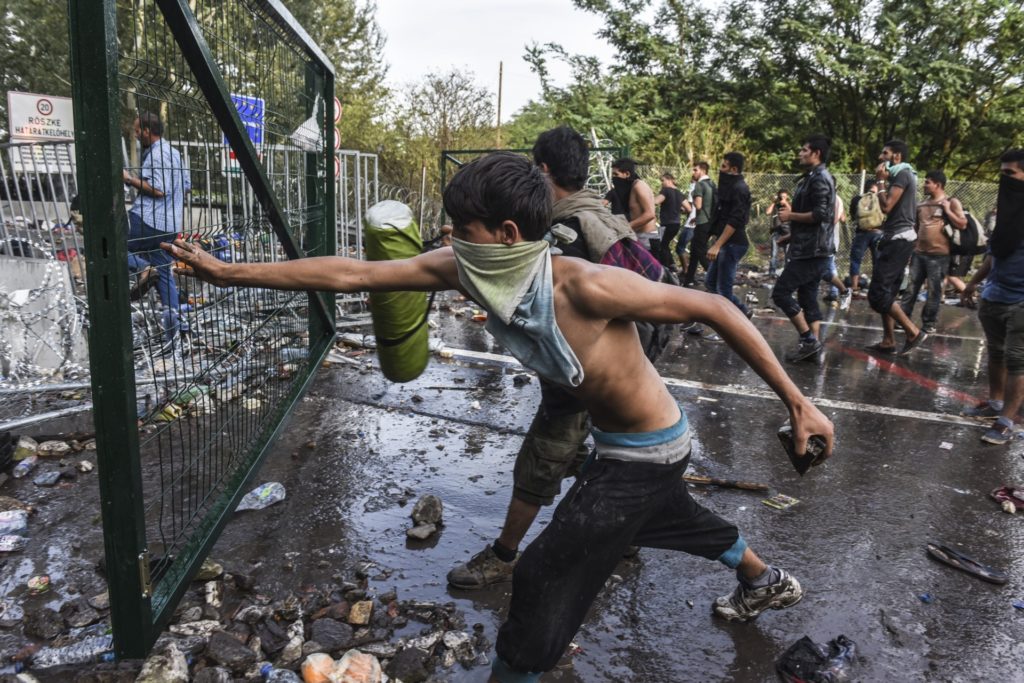 Migrants throw rocks and try to remove the gates during clashes with Hungarian anti-riot police at the Hungarian border with Serbia near the town of Horgos on September 16, 2015. Europe’s 20-year passport-free Schengen zone appeared to be at risk of crumbling with Germany boosting border controls on parts of its frontier with France as migrants desperate to find a way around Hungary’s border fence began crossing into Croatia. With a string of EU countries tightening frontier controls in the face of the unprecedented human influx, the cherished principle of free movement across borders — a pillar of the European project — seemed in grave jeopardy. (PARMEND NIMANI/AFP via Getty Images) 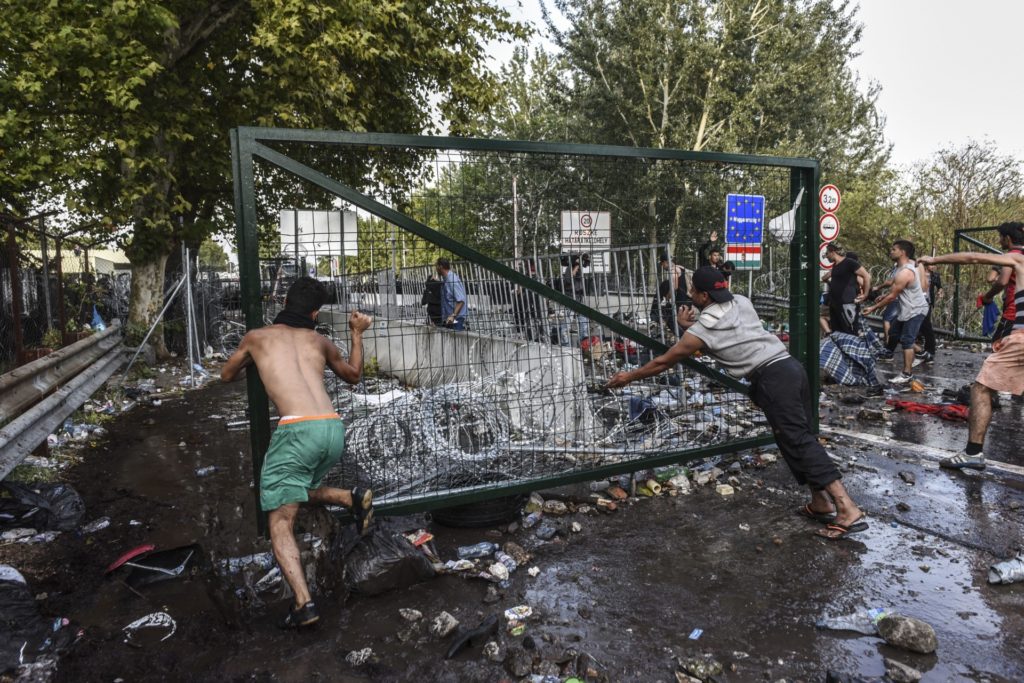 Migrants try to remove the gates at the Hungarian border with Serbia near the town of Horgos on September 16, 2015. (ARMEND NIMANI/AFP via Getty Images)

Carlson recalled how Prime Minister Orbán “decided no, we’re not going to allow our nation of 10 million people to be changed forever by people we didn’t invite in and who are coming here illegally” — a move which initially led to violent clashes between the Hungarian authorities and migrants to continue marching through the country at the border with Serbia, a non-EU state.

Many Hungarian police officers were injured during this assault, along with some children who were physically hurled over security barriers by older migrants.

Violence of this kind is now rare, with Orbán’s longstanding no-nonsense border policies deterring most migrants from attempting to penetrate his country in the first place — although the authorities did report a worrying incident of a group of 15 would-be border crossers “spraying uniformed officers protecting the border with a gas spray” and injuring four of them in late July.

'UN slams Hungary because their wall is doing its job' https://t.co/6n97uC6ykn

“The EU called what [Orbán] was doing illegal, but he did it anyway. He built a wall, and today we went to see it,” Carlson reported.

The FNC host said he found the wall was “very simple” — really a fence — and a repudiation of American experts’ claims that “it is impossible to stop immigration with a wall, no matter how high tech”.

“While we were on the border… we saw two people who attempted to come illegally,” Carlson added, going on to describe how the Hungarians dealt with the incident.

They came over the border, they were immediately picked up by Border Patrol. They were brought to a detainment area. They were treated politely. We were there the whole time.

They were photographed. They were searched for weapons on the outside of their clothing and then they were escorted through a door, and we followed them. We thought they were going to further processing or to meet with their attorneys or some Soros-funded NGO, and then moved into some other part of Hungary to stay there forever, at least a few years.

But that’s not what it was. That door was the border, and as we followed them through, they were escorted back where they came from, into Serbia and they can apply for asylum somewhere else.

Telling a Hungarian government minister present at the scene that it was “hard to believe that’s your policy, when you come here illegally, you’re just escorted out politely”, the American journalist was told simply: “We’re a serious country.”

Hungary, he summarised, has a “straightforward immigration policy. No, you’re not allowed to come here illegally. I’m sorry. This is a real country. We have laws.”

“It works,” he added, somewhat ruefully.

The Hungarian process is not just a radical departure from the neglectful approach to border control adopted by Joe Biden in the United States, however, but also from that adopted by the sycophantic Boris Johnson in the United Kingdom, despite his being a notionally conservative leader who ran on a platform of immigration control.

Indeed, despite being much further from Africa and the Middle East than even Hungary, not part of the EU’s controversial no-borders Schengen zone, and protected by a formidable natural moat in the English Channel, the Johnson administration has been presiding over an unprecedented surge in illegal boat migrants, first declared a “major incident” in 2018 but getting progressively worse ever since, despite payments in the tens of millions of pounds to France to get control of the crisis.

Rather than turn back the migrants as obviously ineligible for asylum, given France is a safe, first-world EU member-state, the British authorities do not just fail to stop boat migrants, but have for years now gone out of their way to meet them at sea and bring them to shore — meaning they cannot even be charged for illegal entry by a largely disinterested Crown Prosecution Service.

In one incident, Border Force are alleged to have actually contacted the French for permission to enter French territorial waters to collect boat migrants, to complete the process of shipping them into Britain even faster.

Rather than countenance simply turning the boats back unilaterally — the policy adopted by Australia when they were undergoing a boat migrant crisis to stunning success — Boris Johnson and his Home Secretary, Priti Patel, are currently block-booking hotels, some highly luxurious, to accommodate illegals free of charge.

So @PritiPatel won't tell Border Force to take illegal migrant boats that reach British waters back to France, but she WILL let them go into French waters to collect illegal migrants and bring them back to Britain? ‍♂️ https://t.co/ejVrOdtTDu