BERLIN (AP) – German officials are defending their preparations for flooding in the face of the raging torrents that caught many people by surprise and left over 180 people dead in Western Europe, but they concede that they will need to learn lessons from the disaster.

Efforts to find any more victims and clean up the mess left behind by the floods across a swath of western Germany, eastern Belgium and the Netherlands continued on Monday as floodwaters receded.

The downpours that led to usually small rivers swelling at vast speed in the middle of last week had been forecast, but warnings of potentially catastrophic damage didn’t appear to have found their way to many people on the ground – often in the middle of the night. 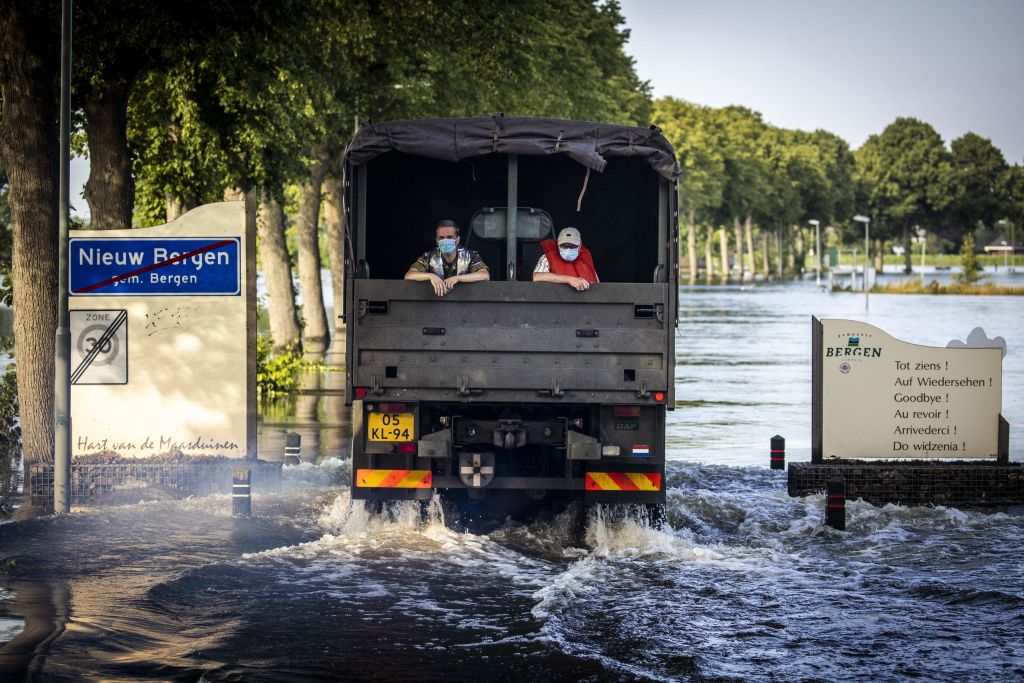 Residents cross a flooded area between Bergen and Nieuw Bergen, on board a shuttle service, operated by Dutch army, on July 19, 2021 after a major flooding in the southern province of Limburg. – Several towns in southern Netherlands suffered damage from flooding this week — though they were spared the worst seen in Germany and Belgium — and no deaths have been reported. – Netherlands OUT (Photo by Vincent Jannink / ANP / AFP) / Netherlands OUT (Photo by VINCENT JANNINK/ANP/AFP via Getty Images) 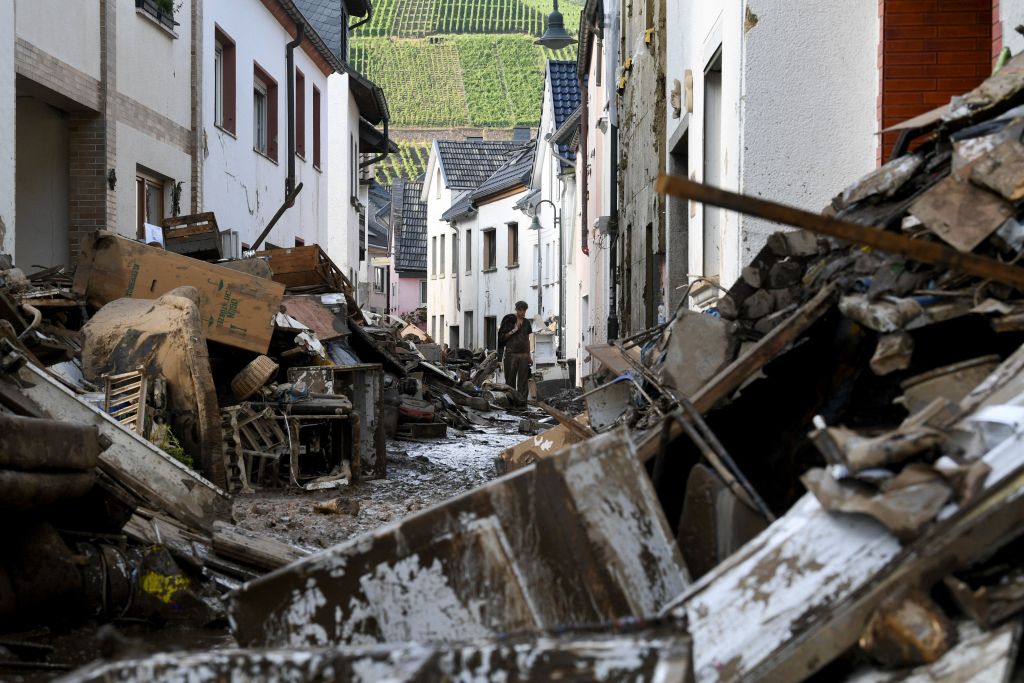 A resident walks in a muddy street full of debris and destroyed furniture and household goods in the city of Dernau, western Germany, on July 18, 2021, after devastating floods. – After days of extreme downpours causing devastating floods in Germany and other parts of western Europe which have been described as a “catastrophe”, a “war zone” and “unprecedented”, more than 180 people are confirmed dead and dozens missing on July 18, 2021. (Photo by Christof STACHE / AFP) (Photo by CHRISTOF STACHE/AFP via Getty Images)

The head of Germany’s civil protection agency said that the country’s weather service had “forecast relatively well” and that the country was well-prepared for flooding on its major rivers.

But, Armin Schuster told ZDF television late Sunday, “half an hour before, it is often not possible to say what place will be hit with what quantity” of water. He said that his agency had sent 150 warning notices out via apps and media.

He said he couldn’t yet say where sirens sounded and where they didn’t – “we will have to investigate that.”

Officials in the worst-affected German state, Rhineland-Palatinate, said they were well-prepared for flooding and municipalities had been alerted and acted.

But the state’s interior minister, Roger Lewentz, said after visiting the hard-hit village of Schuld with Chancellor Angela Merkel on Sunday that “we of course had the problem that the technical infrastructure – electricity and so on – was destroyed in one go.”

Local authorities “tried very quickly to react,” he said. “But this was an explosion of the water in moments. … You can have the very best preparations and warning situations (but) if warning equipment is destroyed and carried away with buildings, then that is a very difficult situation.” 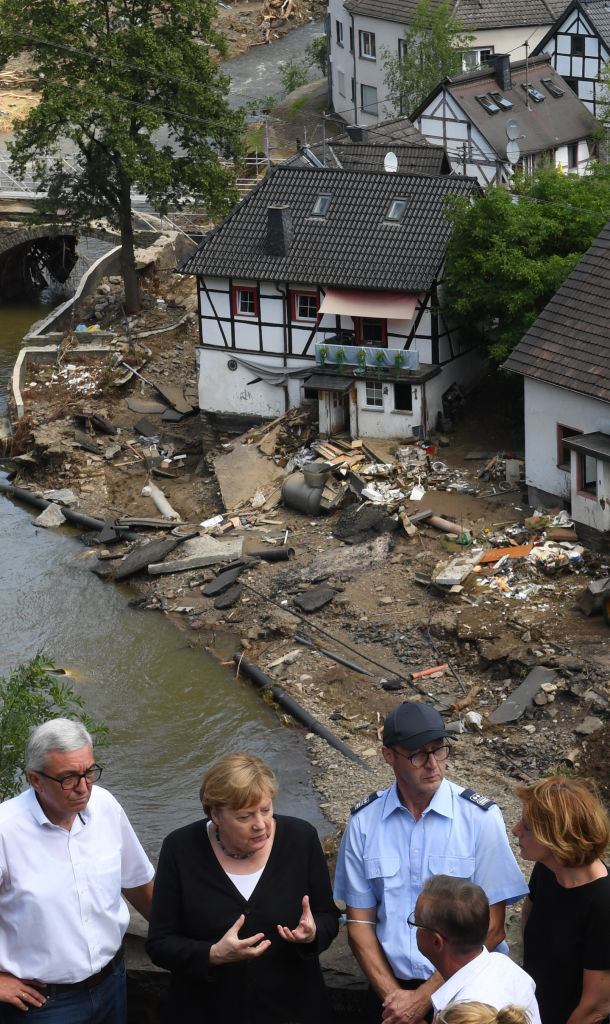 SCHULD, GERMANY – JULY 18: German Chancellor Angela Merkel (2nd L) and Rhineland-Palatinate State Premier Malu Dreyer (R) speak as they stand on a bridge during their visit in the flood-ravaged areas on July 18, 2021 in Schuld, near Bad Neuenahr-Ahrweiler, Rhineland-Palatinate state, western Germany. Extreme downpours caused devastating floods this week in Germany and other parts of western Europe devastating the region. The death toll across Germany and Belgium has risen to at least 180 as rescue workers continue their efforts and communities begin to clear the debris left by the receding waters. (Photo by Christof Stache-Pool/Getty Images) 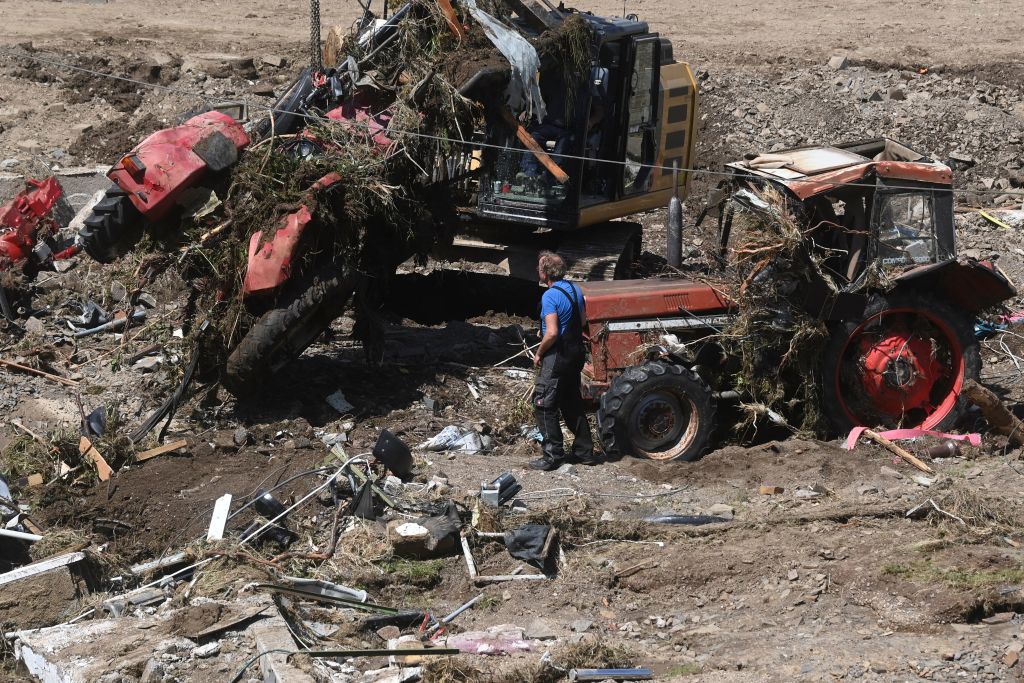 An areal view shows a man near front loader lifting a truck covered in debris after the floods caused major damage in Schuld near Bad Neuenahr-Ahrweiler, western Germany, on July 18, 2021. – After days of extreme downpours causing devastating floods in Germany and other parts of western Europe which have been described as a “catastrophe”, a “war zone” and “unprecedented”, more than 180 people are confirmed dead and dozens missing on July 18, 2021. (Photo by CHRISTOF STACHE / AFP) (Photo by CHRISTOF STACHE/AFP via Getty Images) 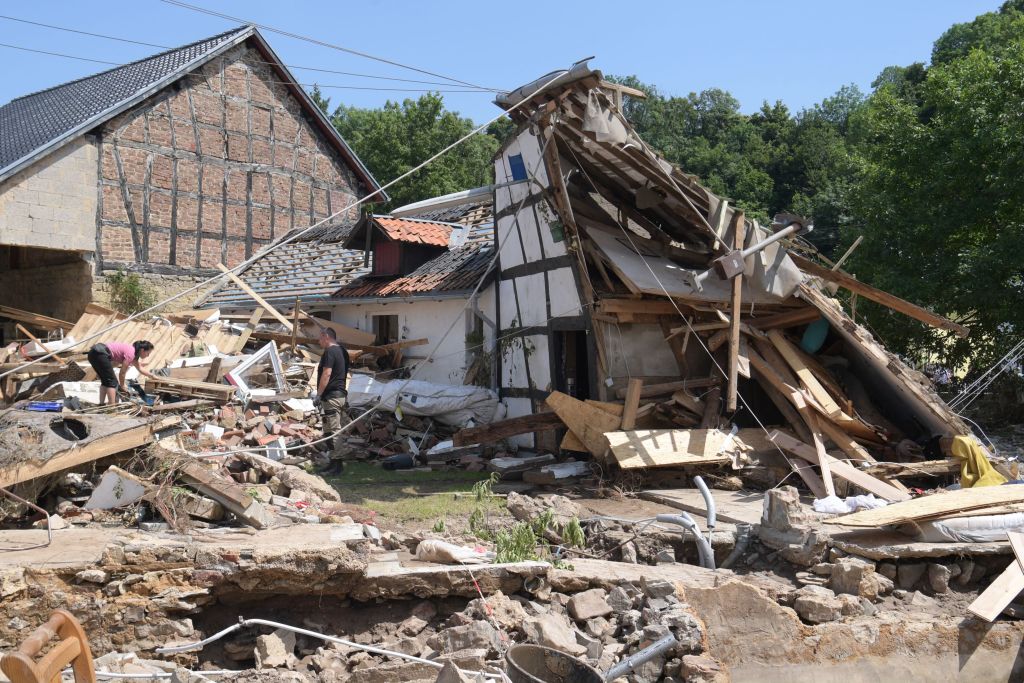