LAS VEGAS (AP) – Conor McGregor sat and seethed with his back on the cage, a temporary cast around his left shin and foot. The biggest star in mixed martial arts was convinced he had just been robbed of revenge on Dustin Poirier by a broken leg.

“I was boxing the bleedin’ head off him, kicking the bleedin’ leg off him,” McGregor shouted. “This is not over! If we have to take this outside for him, we’ll take it outside.”

McGregor’s animosity toward Poirier hasn’t cooled, but this fight trilogy ended — for now, at least — with another victory for his more mild-mannered enemy.

Poirier beat McGregor for the second time in six months when McGregor was unable to continue after the first round at UFC 264 on Saturday night.

Conor McGregor was taken out on a stretcher after suffering a leg injury at #UFC264 pic.twitter.com/eQe9fa09YJ

McGregor (22-6) fell to the canvas and never got up after a punch by Poirier (28-6), who will get the UFC’s next lightweight title shot. McGregor’s leg and ankle buckled when he stepped back from the blow, and Poirier finished the round raining blows down on the former two-division UFC champion.

“Just the thing had separated, and I bleedin’ landed on the wonky leg like Anderson Silva that one time, something similar to that,” McGregor said, referring to longtime middleweight champ Silva’s infamously gruesome broken leg against Chris Weidman. “It’s a mad business.” 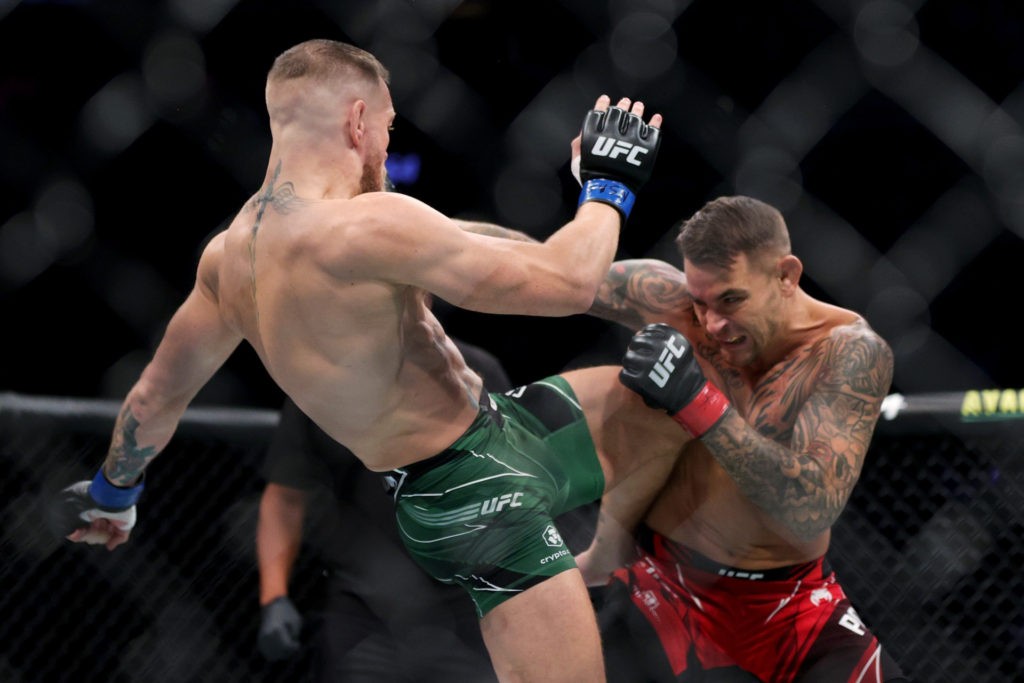 LAS VEGAS, NEVADA – JULY 10: Conor McGregor of Ireland lands a knee on Dustin Poirier in the first round in their lightweight bout during UFC 264: Poirier v McGregor 3 at T-Mobile Arena on July 10, 2021 in Las Vegas, Nevada. (Photo by Stacy Revere/Getty Images)

UFC President Dana White said he was told McGregor broke his shin near the ankle. McGregor will have surgery on Sunday morning.

Poirier said he thought McGregor’s leg broke when he checked one of McGregor’s kicks earlier in the fight. McGregor disagreed, saying there was “not one check.”

“You never want to get a win that way, but what happened was the result of checking a kick,” Poirier said. “I’m more than sure of it. He got what he had coming to him. Karma is a mirror.” 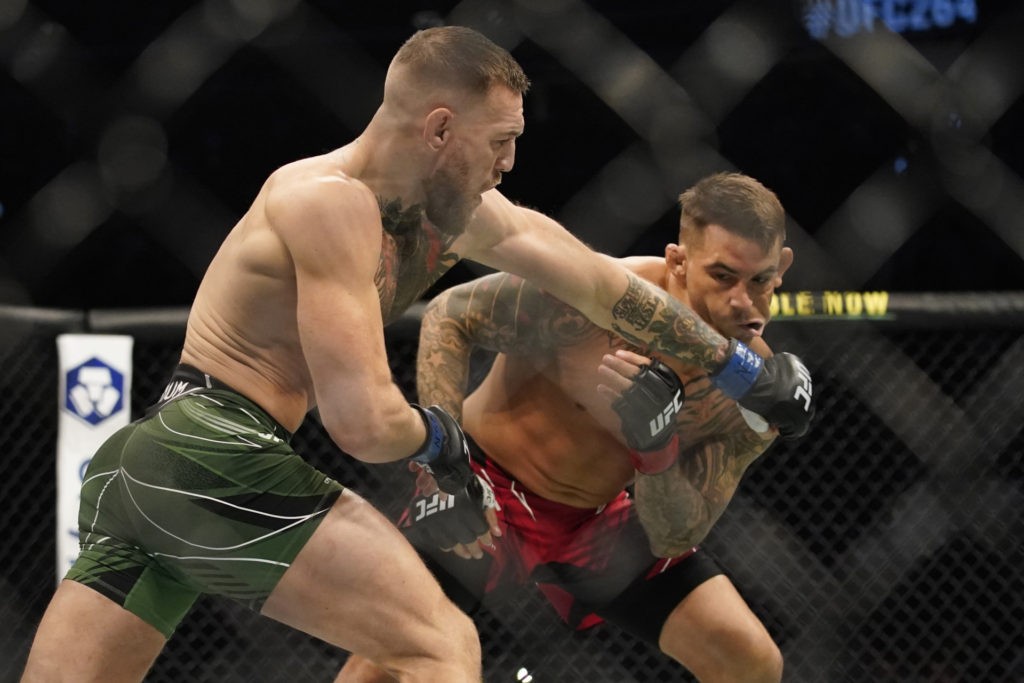 McGregor dropped to 1-3 in the cage since 2016, when he abdicated his UFC title reigns and accepted a wildly lucrative boxing match with Floyd Mayweather. McGregor has been unable to recapture his fearsome MMA form over the past half-decade – and despite his protestations, there was little in the first round at UFC 264 to suggest McGregor was back in elite form.

Poirier was largely in control of the opening round, parrying McGregor’s kicks and landing several strikes before getting control over McGregor on the ground. After McGregor got up from a long stretch of punches and elbows, Poirier knocked him down one last time – and McGregor’s ankle bent gruesomely as he fell.

“It [stinks], because I was going to beat the guy if his leg held up,” Poirier said. “I need to digest it all, because right now, it kind of feels weird. It’s not a good feeling.” 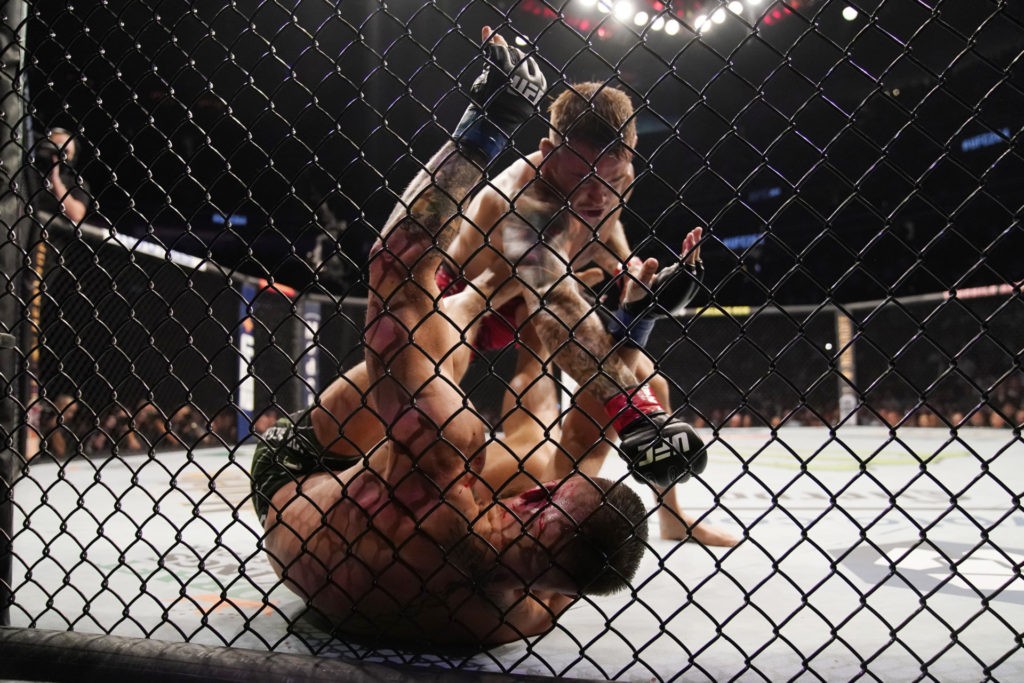 White confirmed Poirier will get the next shot at new lightweight champ Charles Oliveira. White also said he expects a fourth fight between McGregor and Poirier at some point after McGregor’s leg heals.

“The fight didn’t get finished,” White said. “You can’t have a fight finish that way. We’ll see how this whole thing plays out. Who knows how long Conor is out? Poirier will do his thing until Conor is ready.”

Poirier also said he intends to fight McGregor a fourth time – and it will be personal. McGregor returned to his verbose, mean-spirited promotional persona for this fight promotion, repeatedly insulting Poirier’s wife and vowing to kill Poirier.

“We are going to fight again, whether it’s in the octagon or on the sidewalk,” Poirier said. “You don’t say the stuff he said.”

Poirier stopped McGregor in the second round when they met in Abu Dhabi last January, avenging his first-round knockout loss to McGregor in 2014. Poirier’s clear superiority in the fighters’ second bout made a third showdown seem questionable just six months later, but McGregor demanded the chance to fix his mistakes and Poirier accepted the massive paycheck that comes from sharing a cage with McGregor.

Instead of taking an easier fight or another boxing match, McGregor wanted another shot at Poirier after getting stopped by strikes for the first time in his MMA career. He claimed he had been distracted by his plans to box Manny Pacquiao this year, and he vowed to devote his full attention to MMA in training camp.

McGregor has lost decisively to Khabib Nurmagomedov and twice to Poirier since 2016 while beating only an over-the-hill Donald Cerrone.

McGregor’s star power has shown no significant decline despite the dwindling evidence of his once-transcendent skills. The celebrity-studded Vegas crowd was vocally behind McGregor, who strutted into the octagon with his usual flair.

But the steady, hardworking Poirier has earned the chance to recapture the lightweight title he held on an interim basis in 2019 before his loss to Nurmagomedov. That was the only defeat in nearly five years for Poirier, who has mostly maintained a decade of upward momentum in the UFC.

McGregor was charming and friendly to Poirier throughout the promotion of their second bout earlier this year, but that collegiality was gone for the third fight. Poirier refused to return insults to McGregor when the Irish fighter insulted Poirier’s wife again after the fight.

“We don’t talk like that,” Poirier said. “I hope this guy gets home safe and gets to be with his family.”

The frustration boiling over for Conor McGregor here.

No matter the hardship, Notorious will be back. #UFC264 pic.twitter.com/tghHEv8TSy

Donald Trump also arrived for the final three fights and got a brief, loud burst of cheers and boos from the packed arena.

Gilbert Burns won a unanimous decision over Stephen “Wonderboy” Thompson in the co-main event, with the Brazilian bouncing back from his knockout loss to welterweight champ Kamaru Usman in February.

Earlier on the pay-per-view card, Australian heavyweight Tai Tuivasa celebrated his violent first-round knockout of former NFL player Greg Hardy by climbing onto the octagon fence and doing a shoey — drinking booze from a shoe in proper Aussie celebratory style. Hardy, who lost his NFL career in 2015 after being convicted of domestic violence, has lost two straight fights after a 7-2 start to his MMA career.

Welterweights Michel Pereira and Niko Price put on the best show on the early undercard, and Pereira highlighted his narrow decision victory with a remarkable standing backflip and a scramble into full mount on a prone Price. 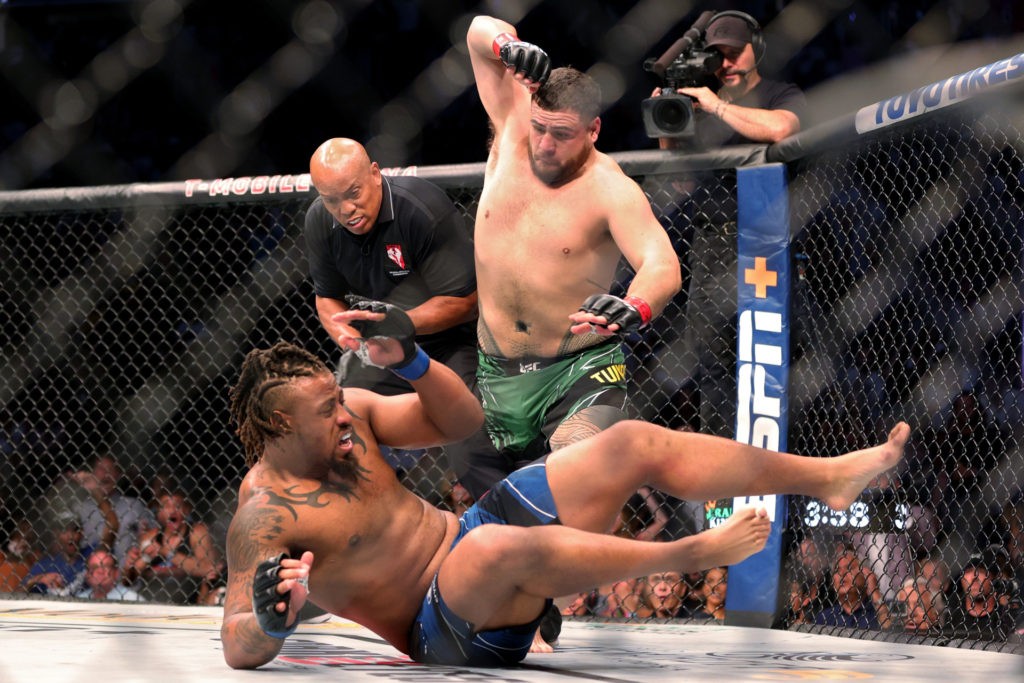 LAS VEGAS, NEVADA – JULY 10: Tai Tuivasa of Australia (top) takes down Greg Hardy in the first round in their heavyweight bout during UFC 264: Poirier v McGregor 3 at T-Mobile Arena on July 10, 2021 in Las Vegas, Nevada. (Photo by Stacy Revere/Getty Images)