The British prime minister and the head of the armed forces are among those who have voiced concerns about the legacy of 20 years of war in Afghanistan as UK troops withdraw alongside U.S. allies.

The United Kingdom is ending its official involvement in Afghanistan, almost 20 years after the U.S.-led coalition began operations in the country, and 15 years after British troops deployed to the southern Taliban-stronghold province of Helmand. Britain’s deployment to the intensely fought-over region was a contributing factor to the country’s unusually high death toll in the conflict, with UK soldiers twice as likely to be killed as Americans.

But now questions are being asked about the conflict and withdrawal at the highest levels in the United Kingdom, with concerns raised over whether the cost to the United Kingdom in fatalities and taxpayer’s money — “blood and treasure” — was justified, and being squandered. In all, 457 Britons died in the conflict, and the government spent at least £37 billion sustaining the deployment.

Among those asking those questions this week is British Prime Minister Boris Johnson, who pointed to the achievements of British occupation — including spreading education to Afghan girls in the country — in his statement to Parliament, but nevertheless expressed apprehension about the future of the country. He said, according to The Guardian: “If you ask me whether I feel happy about the current situation in Afghanistan, of course I don’t. I’m apprehensive.”

Indicating the point of balance that Afghanistan — and those hard-won achievements — is now in and how things go are now largely out of the West’s hands, the prime minister continued: “We have to be absolutely realistic about the situation that we’re in, and what we have to hope is that the blood and treasure spent by this country over decades in protecting the people of Afghanistan has not been in vain.”

Johnson was not the only politician at Westminster to express his concerns. Foreign Affairs Committee Chairman Tom Tugendhat, a British Army veteran who served in Afghanistan before becoming a Member of Parliament, outlined his personal investment in Britain’s efforts in Afghanistan not having been in vain, saying yesterday: “We were fighting side by side against the enemies the Prime Minister has just listed. The achievements he listed were won with the blood of my friends. I can point him to the graves where they now lay.”

Mr Tugendhat continued: “That legacy is now in real doubt… If persistence is not persistent, if endurance does not endure, how can people trust us as an ally? How can people look at us as a friend?”

As The Times reports, Tugendhat said there was a “very real possibility” the effort in Afghanistan had been in vain.

The veteran’s remarks met, in some respects, those of presently serving officer General Sir Nick Carter, the chief of the defence staff. Carter, who led a division in Afghanistan, is reported to have called the state of affairs on the ground “pretty grim”, noting that with the Coalition withdrawal, Afghan state forces would no longer have the air assets which gave them the “edge” against insurgents, it is reported.

The situation is indeed grim, with Afghan troops reportedly wholesale fleeing the country to escape the advancing Taliban, who are consolidating control in rural areas. 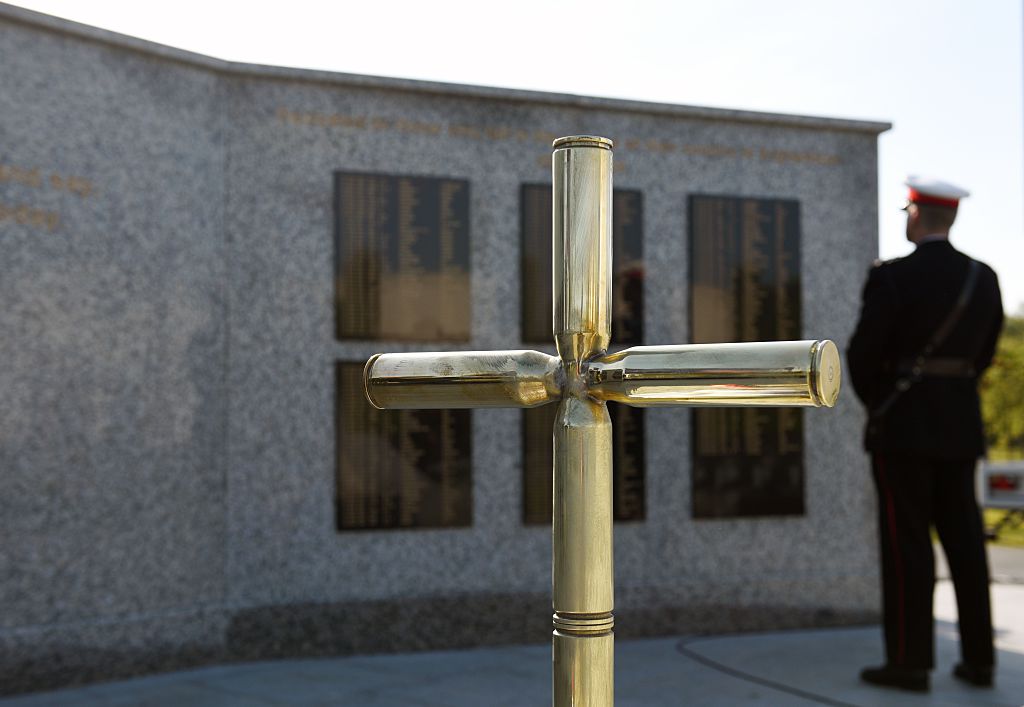 A cross made of shell casings, which adorned the original Bastion Memorial Wall at Camp Bastion in Afghanistan, is pictured as a member of the military looks at a newly reconstructed Bastion Memorial at the National Memorial Arboretum near Alrewas in Staffordshire, central England on June 11, 2015. A Service of Dedication will be held later Thursday to inaugurate the Bastion Memorial, which pays tribute to those who lost their lives during combat operations in Afghanistan. AFP PHOTO / OLI SCARFF (Photo credit should read OLI SCARFF/AFP via Getty Images)