Radical left-wing activists demonstrated outside Parliament on Monday against Home Secretary Priti Patel’s proposed legislation to curb the right to protest in Britain.

In a Breitbart London exclusive video, communists and transgender rights activists railed against the Police, Crime, Sentencing and Courts Bill which they claimed is a “fascist” encroachment on the freedom of expression

The protest occurred as the House of Commons debated the bill, ultimately passing the measure on to the House of Lords for consideration by a margin of 365 to 265.

A speaker from the Revolutionary Communist Group said that the “imperialists and the pigs are together trying to clamp our movements down”.

“We must stand together so the centuries of death at the hands of the racist state won’t be in vain. We will be on the streets, bill or no bill, if we are painted as criminals or not.” 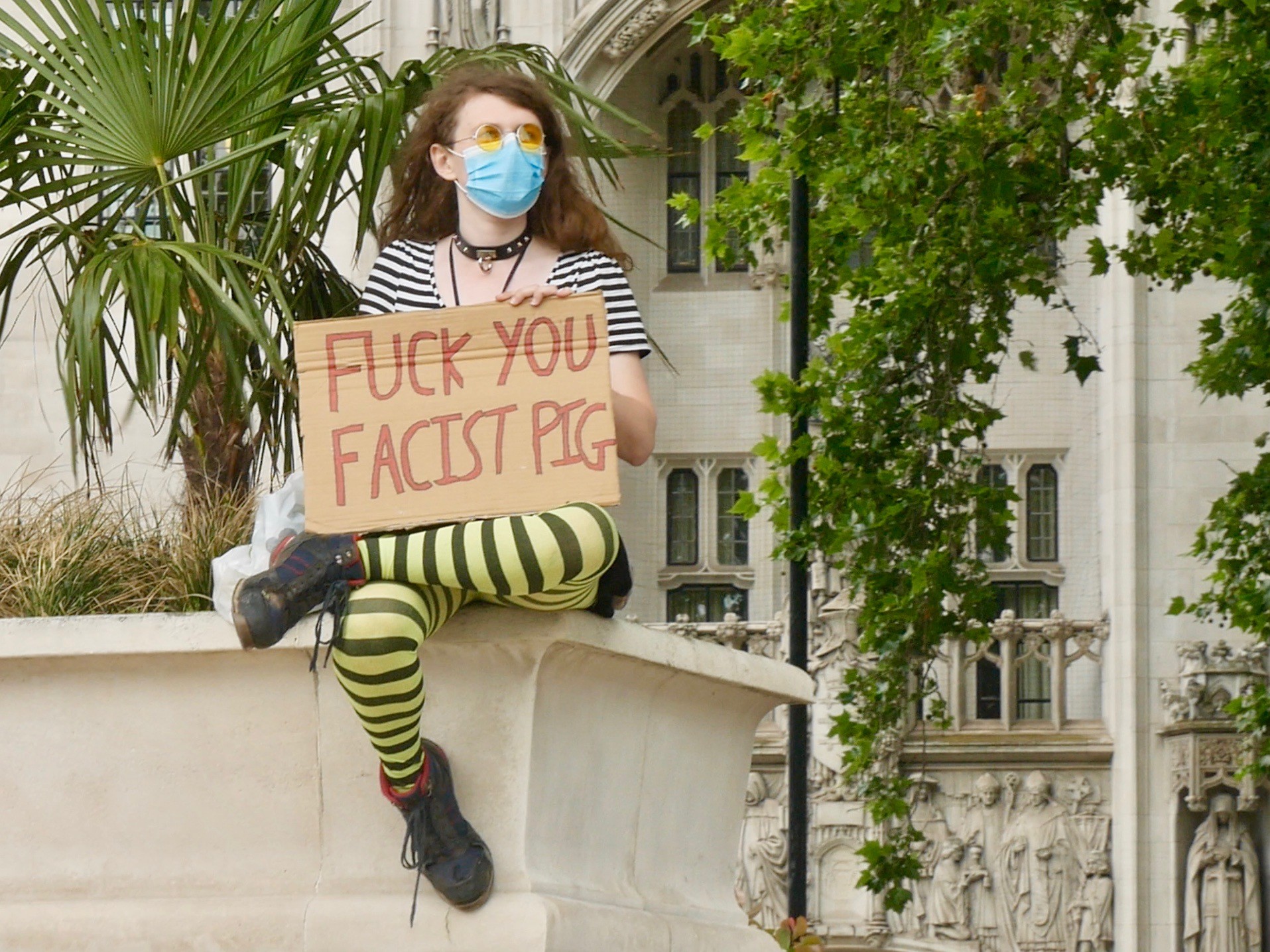 Left-wing activists joined together outside of the Houses of Parliament in London to demonstrate against Home Secretary Priti Patel’s proposed limits on the right to protest. Kurt Zindulka, Breitbart News

A self-identified “queer trans woman” told the crowd that “every ounce of my existence” is a result of the right to protest.

“If a fascist government are to deny us healthcare and enable hate groups in Parliament, we will be loud and disruptive and take to the streets until our humanity will not be ignored.’

The activist said that the policing bill would give the government to “limit the expression of our existence to a bank-sponsored gay Tory parade and concert and it gives them the power to arrest us for taking part in our own liberation.” 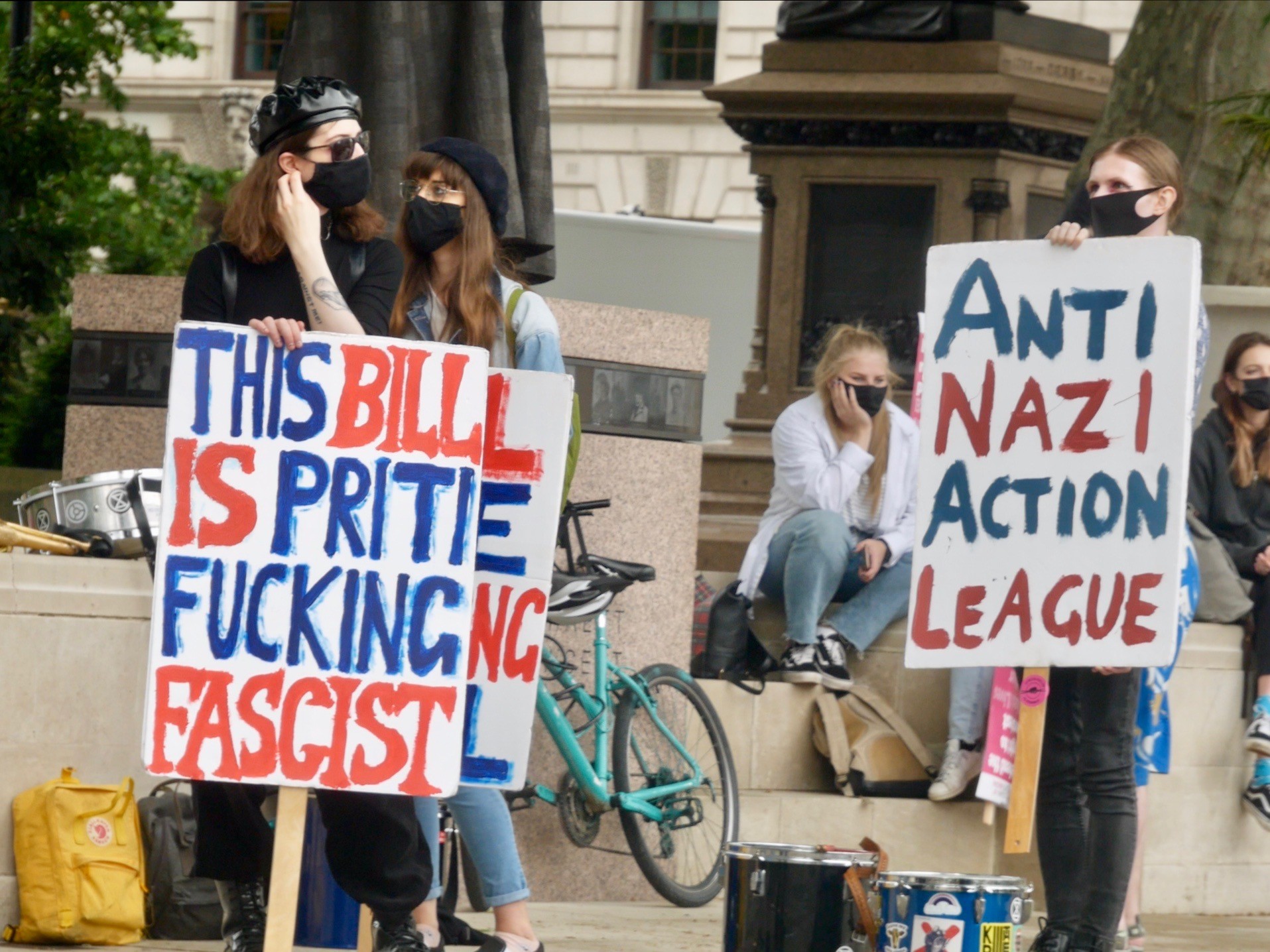 Left-wing activists joined together outside of the Houses of Parliament in London to demonstrate against Home Secretary Priti Patel’s proposed limits on the right to protest. Kurt Zindulka, Breitbart News

During the debate of the legislation, Home Secretary Priti Patel defended the increased police powers to take a “more proactive approach to managing protests.”

Patel claimed that the purpose of the legislation is “not about stifling freedom of expression” but argued that “there is a balance to be struck between the rights of the protester and the rights of others to go about their daily lives.”

The Home Secretary argued that the current powers to police protests, under the Public Order Act of 1986, are outdated because groups have taken to using new tactics such as “such as blocking emergency vehicles, glueing oneself to a train, blocking airport runways and preventing the distribution of newspapers” which Patel said are “unacceptable and illegitimate.”

“They will be treated as such. By attempting to strike out those clauses, Labour has proved that it is on the side of the disruptive minority and not the hard-working majority,” Patel said.

“Whether it is our trade unions or another group that wants to make its views known loudly in the streets, we limit their ability to do so at our peril,” the Labour MP added.

The legislation would give police in Britain the power to disperse protests for broad reasons such as causing a nuisance, serious annoyance, or for being too noisy causing “serious unease, alarm or distress to bystanders”.

Protesters could be liable to face up to ten years in prison for breaching the act or face heavy fines.

Home Secretary Priti Patel’s police reforms were drawn up after last Summer’s spate of large-scale and disruptive protests from leftist groups such as Black Lives Matter and Extinction Rebellion.

However, there have been concerns that the bill would diminish the civil liberties of all Britons, with those on the political right pointing to the harsher enforcement over the past year by police during anti-lockdown demos compared to leftist protests.

The legal and policy officer for Big Brother Watch, Mark Johnson told LBC’s Maajid Nawaz that the reforms would “empower the state at the expense of the citizen,” adding that there is a concern that giving police wide discretion to enforce the vague law poses the risk of politicised interpretations of the bill.