A statue of Canadian educator Egerton Ryerson, located at Ryerson University in Toronto, was toppled this weekend and beheaded by extremists who threw the monument in Toronto harbour.

The toppling of the statue came amid protests in the city over what are believed to be 215 unmarked children’s graves found on the Tk’emlúps te Secwepemc First Nations reserve in Kamloops, British Columbia. The discovery has been claimed as a mass grave in some media reports, such as the BBC, despite a press conference last week clarifying they are believed to be a series of individual graves.

The statue was pulled down in the late afternoon on Sunday after years of controversy over Ryerson’s role in the implementation of the residential school system in Canada. 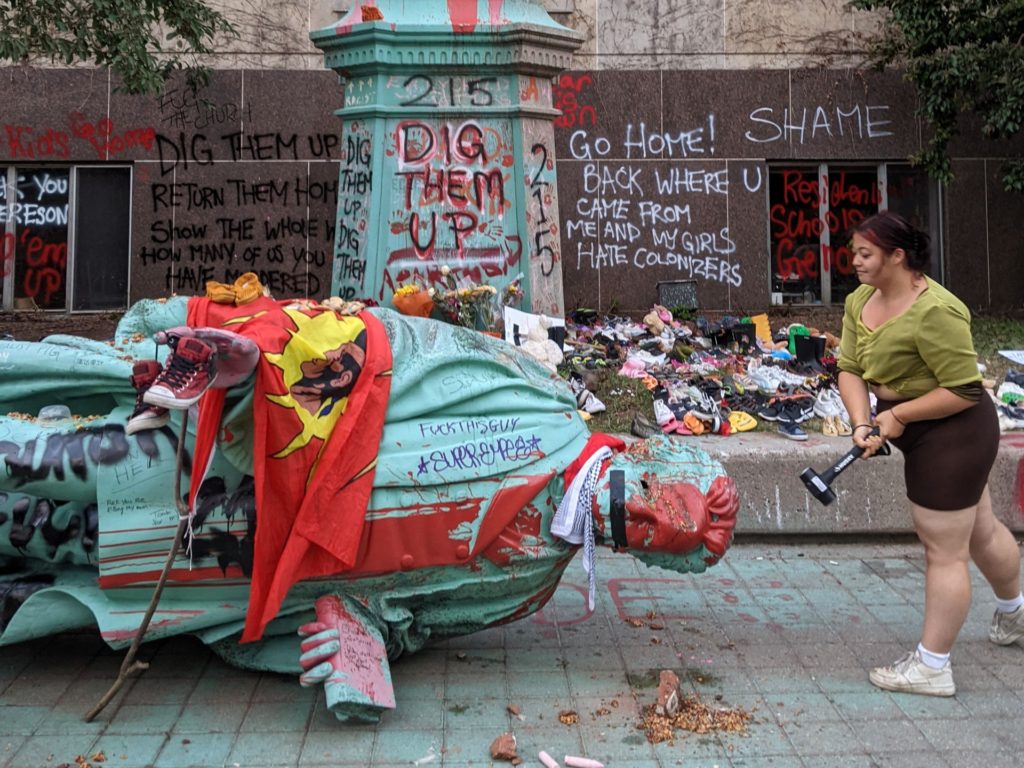 A woman hammers the toppled statue of Egerton Ryerson, one of the architects of indigenous boarding school system, in Toronto on June 6, 2021. – A statue of one of the architects of indigenous boarding schools was taken down June 6 in Toronto following a protest in honour of the 215 children whose remains were recently discovered at the site of a former indigenous boarding school in British Columbia.
The statue of Egerton Ryerson, located on the campus of the university that bears his name in downtown Toronto, was unmounted early Sunday evening after the demonstration, a witness who requested anonymity told AFP. (Photo by Olivier MONNIER / AFP) (Photo by OLIVIER MONNIER/AFP via Getty Images)

The reported graves in Kamloops were located by a major residential school that had opened several years after Ryerson’s death.

The statue of Ryerson, which was also attacked last July during Black Lives Matter protests, was vandalised with paint earlier in the week before it was torn down by protesters and subsequently beheaded and thrown into Toronto harbour.

According to the Toronto Star, the president of Ryerson University in Toronto Mohamed Lachemi stated on Monday that the university has no plans to replace the statue and said he was relieved that no one had been hurt while toppling the statue.

The university had already been considering removing the statue and is also investigating possibly renaming Ryerson University as well.

The toppling and beheading of the statue of Egerton Ryerson came nearly a year after a statue of Canada’s first Prime Minister Sir John A. Macdonald was toppled and beheaded in Montreal last August by far-left activists.

Sir John A., like Ryerson, is linked to residential schools and the reported discovery in Kamloops has led to another statue of the former Prime Minister being removed in Charlottetown, Prince Edward Island last week.

Greg Rivard, a local councillor in Charlottetown, justified the move saying, “A statue is not history. By removing Sir John A., it’s not removing any history.”