The mourning of His Royal Highness Duke of Edinburgh, Prince Philip, who died last week at the age of 99, has extended to the remote South Pacific island nation of Vanuatu, where a tribe has worshipped him as a god for decades.

Villagers from Yaohnanen on Tanna, Vanuatu believe that the Queen’s consort was, in fact, a reincarnation of an ancient warrior who was the son of a mountain god. A local legend said that one day, the warrior would return to the island with a rich, white wife.

Britain’s Times newspaper reports it is not clear how the people of one Vanuatu community came to believe the Duke was their god, but that it is thought the colonial administrative offices on the Island in the 1960s would have had portraits of both Queen Elizabeth II and the Duke on their walls.

Regardless, when the Royal couple visited the island in 1974 — unaware of the special status they held in the eyes of some locals at the time — the villagers decided that the husband of Queen Elizabeth II did indeed fit the bill, and have venerated him as such for decades.

The Duke is prominently featured in many of the homes in the village, with pictures of Philip, including one showing the duke wielding a club made by the villagers and sent to London as a gift.

The islanders would also invoke Philip in their daily prayers, calling upon his blessing for their banana and yam farms. 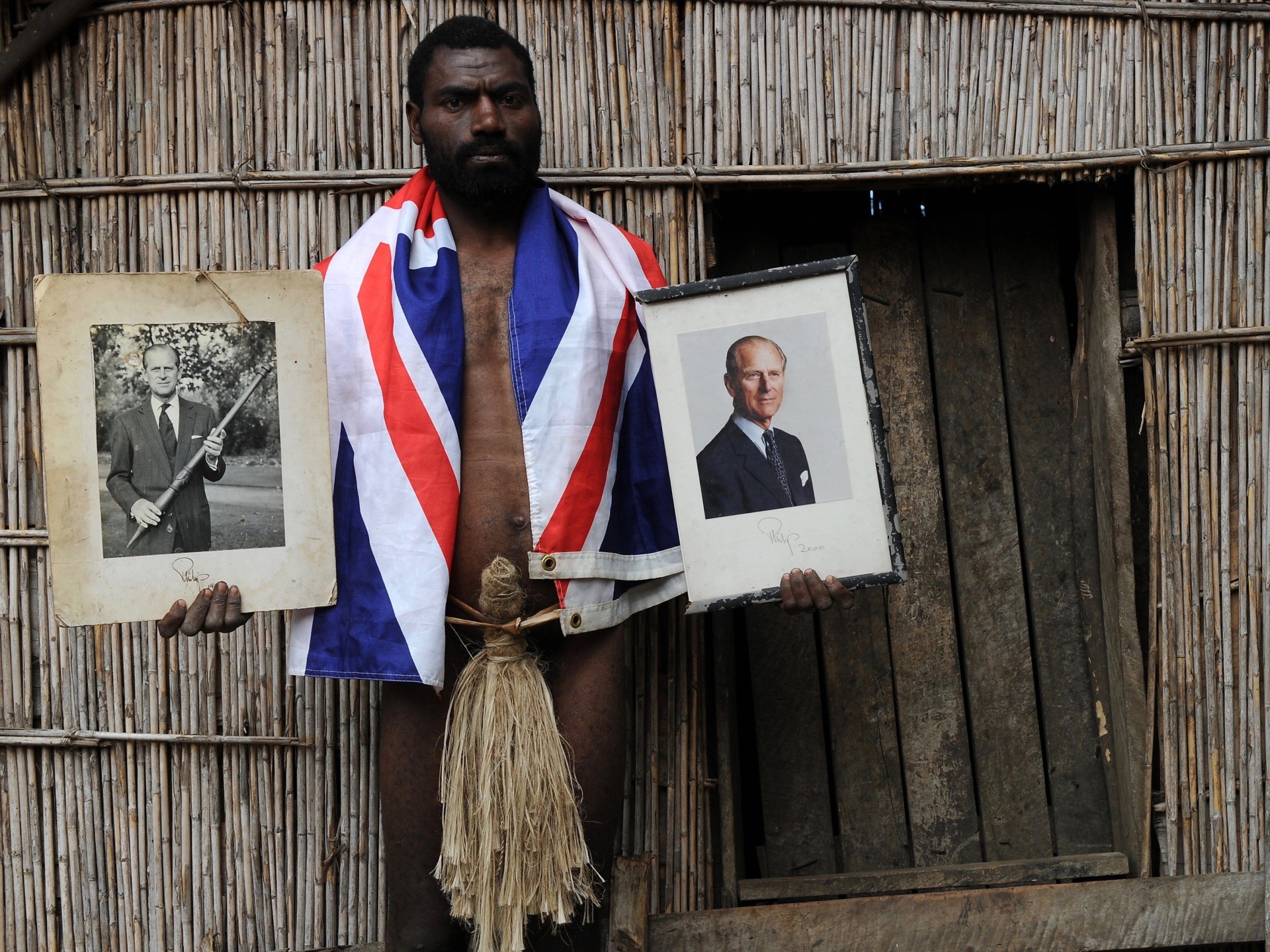 Sikor Natuan, the son of the local chief, holds two official portraits (one holding a pig-killing club, L) of Britain’s Prince Philip in front of the chief’s hut in the remote village of Yaohnanen on Tanna in Vanuatu on August 6, 2010. TORSTEN BLACKWOOD/AFP via Getty Images

An officer with Vanuatu’s Cultural Centre, Jean-Pascal Wahe, who travelled to the village to meet with Yaohnanen’s two chiefs following the death of Prince Philip, told The Times: “They came out to meet me and asked me to confirm whether it was true.”

“They were upset and shocked. I told them it was true,” Wahe added.

Anthropologist Kirk Huffman, who spent 18 years in the country, told the Sydney Morning Herald: “His thing was the promotion of respect for tradition and that’s I think one of the things that really clicked with them. These people are really very strong respecters of tradition, they follow a very ancient philosophical tradition.”

The relationship between the villagers and the Duke of Edinburgh cuts against widespread leftist narratives, which have accused Philip of being racist.

“In this case, he has been incredibly respectful, very sympathetic, he’s communicated with them, he’s sent them gifts, they have sent him gifts, really since the 1970s,” Huffman said. The Duke never returned to the Island after 1974 but did meet a delegation of tribesmen in London in 2007. 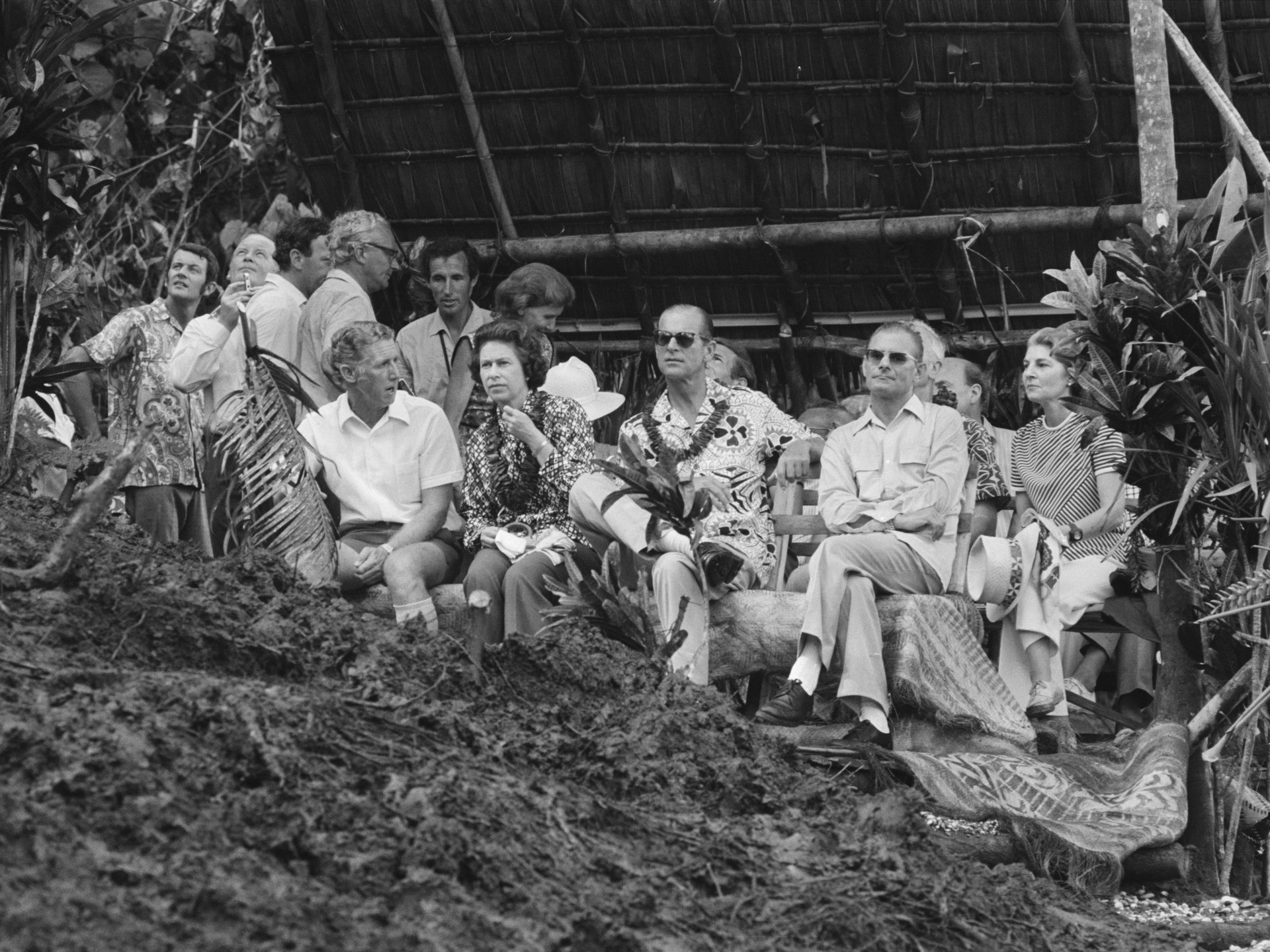 Queen Elizabeth and Prince Philip (centre) watching a display of land-diving from a bamboo tower, during their visit to Pentecost Island, Vanuatu, off the north-east coast of Australia, February 1974. Land diving is an initiation rite unique to the island, and is thought to be the origin of bungee jumping. (Photo by McCabe/Daily Express/Hulton Archive/Getty Images)

The anthropologist said that it is unlikely that the passing of Prince Philip will affect their worship of him; however, it may come in a different form.

As the villagers do not recognise the British monarchy, it is unclear whether the members of the Prince Philip Movement on the island nation will confer the god-like status to his heir, Prince Charles.

The Prince of Wales has met several members of the village in 2018, including a man named Jimmy Joseph, who presented Charles with a gift for his father.

Joseph said: “I gave him a walking stick for his father made by the hands of the Prince Philip Movement.

“I told him a lot of people in the movement have now died but there are some still living.

“The prince said he would deliver the message personally.”