BELFAST, Northern Ireland (AP) – Crowds from Protestant and Catholic communities hurled bricks, fireworks and gasoline bombs at police and each other overnight in Belfast, as a week of street violence escalated. Police and politicians tried Thursday to calm the volatile situation in Northern Ireland, where Britain´s exit from the European Union has unsettled an uneasy political balance.

The focus of the violence, some of it committed by youths in their early teens, was a concrete “peace wall” in west Belfast that separates a British loyalist Protestant neighborhood from an Irish nationalist Catholic area. The two sides clashed across the wall, while nearby a city bus was hijacked and set on fire.

Police Service of Northern Ireland Assistant Chief Constable Jonathan Roberts said several hundred people gathered on both sides of a gate in the wall, where “crowds … were committing serious criminal offenses, both attacking police and attacking each other.”

Northern Ireland has seen sporadic outbreaks of street violence since the 1998 Good Friday peace accord ended the Troubles – decades of Catholic-Protestant bloodshed over the status of Northern Ireland in which more than 3,000 people died. But Roberts said Wednesday’s mayhem “was at a scale we have not seen in recent years.” 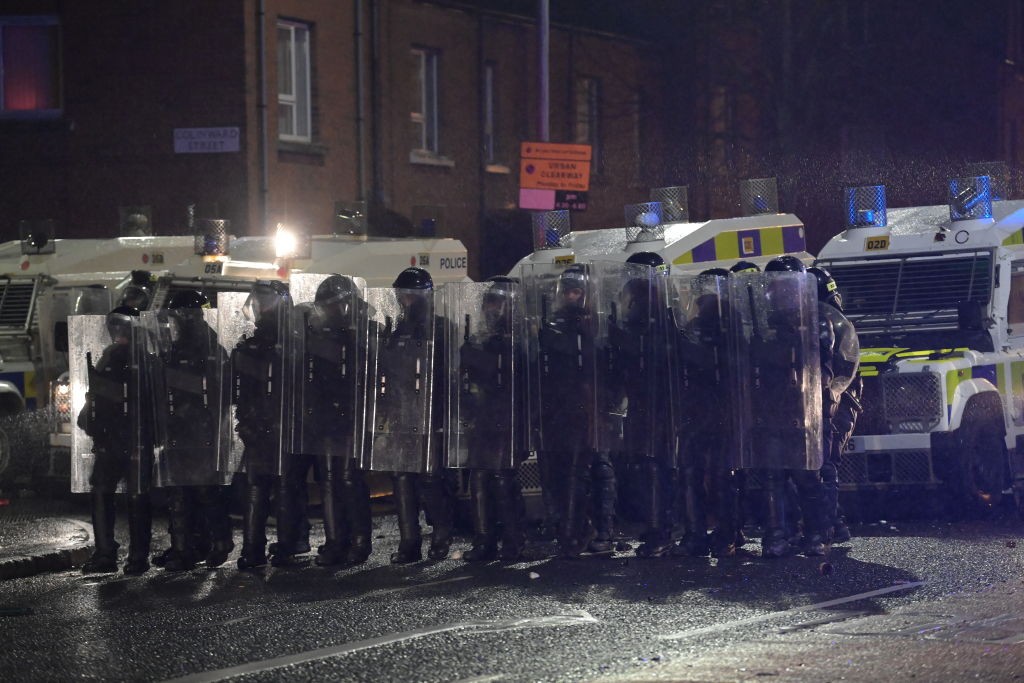 He said a total of 55 police officers had been injured over several nights of disorder and it was lucky no one had been seriously hurt or killed.

The recent violence, largely in loyalist, Protestant areas, has flared amid rising tensions over post-Brexit trade rules for Northern Ireland and worsening relations between the parties in the Protestant-Catholic power-sharing Belfast government. Britain´s split from the EU has renewed tensions over Northern Ireland’s status and disturbed the political balance in region, where some people identify as British and want to stay part of the U.K., while others see themselves as Irish and seek unity with the neighboring Republic of Ireland, an EU member.

U.K. Prime Minister Boris Johnson condemned the unrest, saying “the way to resolve differences is through dialogue, not violence or criminality.”

Northern Ireland´s Belfast-based assembly and government held emergency meetings Thursday and called for an end to the violence.

“We should all know that when politics are perceived to fail, those who fill the vacuum cause despair,” said Foster, who heads the Northern Ireland government.

The latest disturbances followed unrest over the Easter long weekend in pro-British unionist areas in and around Belfast and Londonderry, also known as Derry, that saw cars set on fire and projectiles and gasoline bombs hurled at police officers.

Authorities have accused outlawed paramilitary groups of inciting young people to cause mayhem. 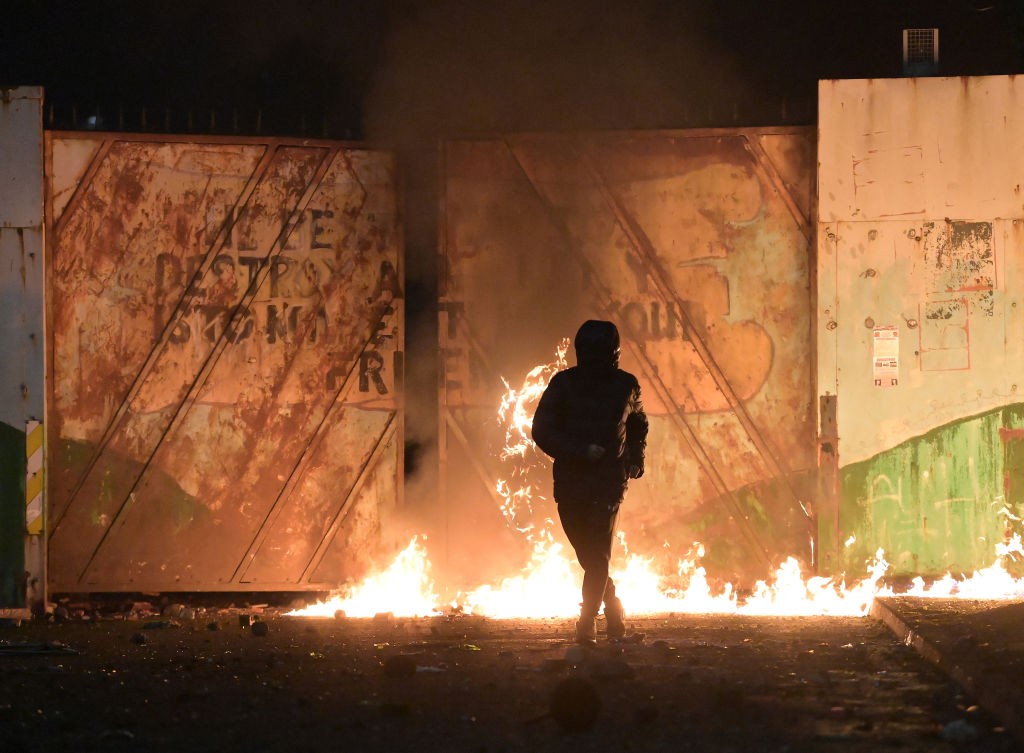 BELFAST, NORTHERN IRELAND – APRIL 07: Nationalists and Loyalists riot against one another at the Peace Wall interface gates which divide the two communities on April 7, 2021 in Belfast, Northern Ireland. Violence broke out after a Loyalist protest took place in front of the gates of the peace line at the Springfield Road/ Lanark Way Interface. Youths attacked police officers and petrol bombed a bus. (Photo by Charles McQuillan/Getty Images)

Roberts, the senior police officer, said some adults stood clapping and cheering while children as young as 12 or 13 rampaged.

The situation in Northern Ireland has been destabilized by Britain’s departure from the EU – after almost 50 years of membership – that became final on Dec. 31.

Unionists says the new checks amount to a border between Northern Ireland and the rest of the U.K. – something they fear undermines the region’s place in the United Kingdom.

Both Britain and the EU have expressed concerns about how the agreement is working, and the Democratic Unionist Party, which heads the Belfast government, wants it to be scrapped.

Katy Hayward, a politics professor at Queen’s University Belfast and senior fellow of the U.K. in a Changing Europe think tank, said unionists felt that “the union is very much under threat, that Northern Ireland´s place is under threat in the union and they feel betrayed by London.”

Unionists are also angry at a police decision not to prosecute Sinn Fein politicians who attended the funeral of a former Irish Republican Army commander in June. The funeral of Bobby Storey drew a large crowd, despite coronavirus rules barring mass gatherings.

The main unionist parties have demanded the resignation of Northern Ireland´s police chief over the controversy, claiming he has lost the confidence of their community.

“You have a very fizzy political atmosphere in which those who are trying to urge for calm and restraint are sort of undermined,” Hayward said.

“It´s really easy to see how it could get worse,” she added. “There´s many factors, including, obviously, criminal gangs at work who benefit from chaos like this. … So that you could see how things can definitely escalate.”