Stranded truckers in Kent have clashed with police, as some 5,000 lorries have been prevented from entering France after French President Emmanuel Macron closed the border due to fears of a new mutation of the Chinese coronavirus.

At least one man has been arrested outside the Port of Dover after lorry drivers protested on Wednesday. While France officially ended the ban on drivers from the United Kingdom on Sunday, they must have a negative coronavirus test before they can cross the border.

British soldiers have been deployed to hasten the rate of testing. However, Communities Secretary Robert Jenrick said it could be “a few days” before the backlog is cleared, according to the BBC.

Footage shared on social media showed a group of truckers scuffling with police, as tensions mount at the border crossing.

Some of the truckers were heard shouting in English, according to the Daily Mail: “Open the border”, “We just want to go home”, and ‘F*** you, Boris!”

Kent Police claimed they received reports of “disturbances involving individuals in both Dover and at the DfT-run lorry holding facility at Manston who are hoping to cross the Channel”.

“One man has been arrested for obstructing a highway in Dover and remains in custody,” the police force added.

Truckers waiting in Dover say they feel like they have been taken advantage of by President Macron playing “the politics game”.

A representative for the Road Haulage Association, Rod McKenzie, described the situation as “chaos”, saying that the information provided to the truckers has been “extremely poor”.

“They’re tired, frustrated, desperately wanting to get home for Christmas,” he said, adding that the food provisions and toilet and washing facilities provided to the men were “inadequate”.

The Department for Transport claimed that around 5,000 lorries are currently stuck at the border. However, the Road Haulage Association claimed that between 8,000 and 10,000 are stranded in Kent and the areas surrounding the border. 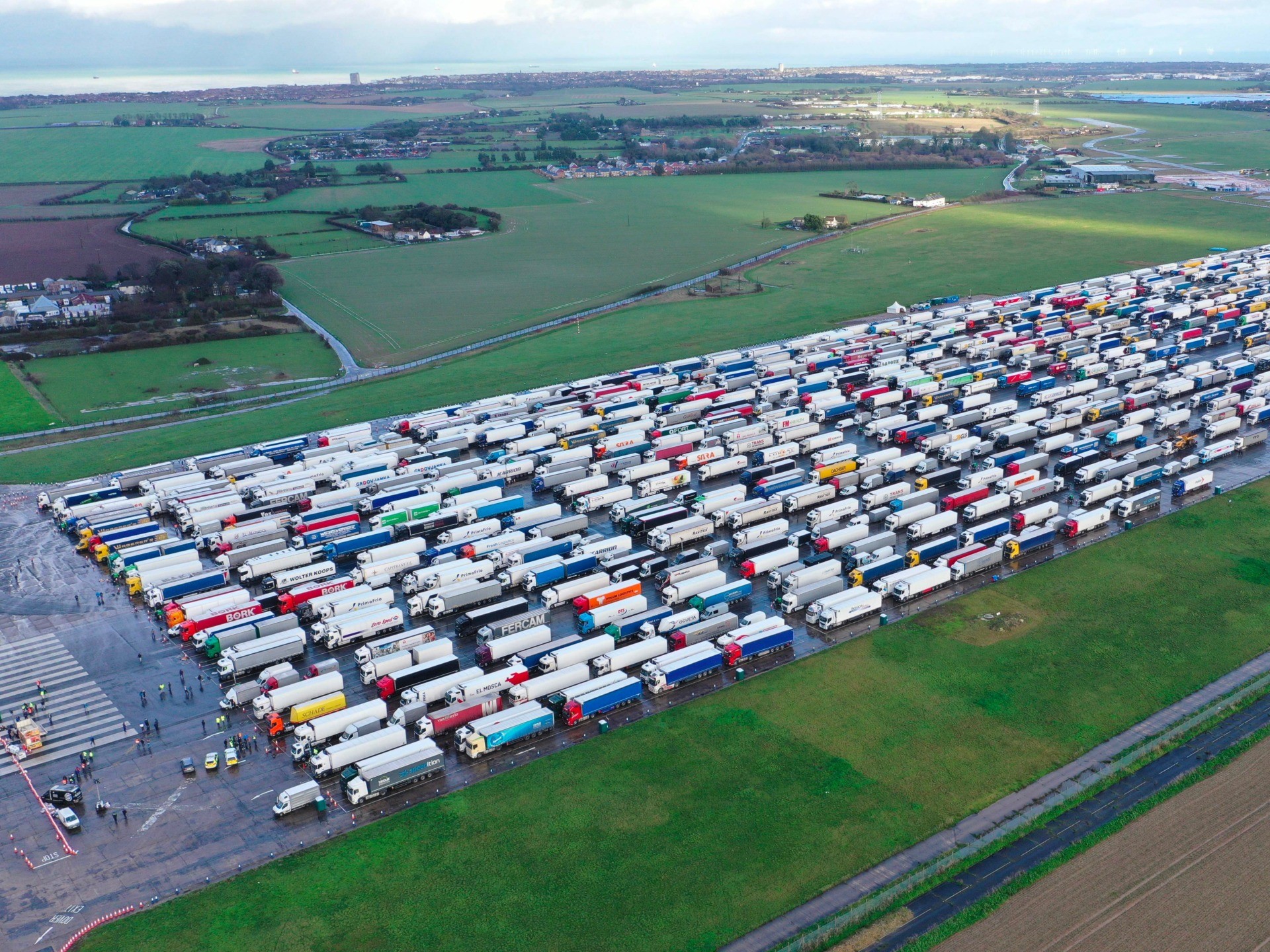 Freight Lorries and heavy goods vehicles (HGVs) are stacked at Manston Airport near Ramsgate, south-east England on December 23, 2020, where freight transport was diverted to wait, after France closed its borders for 48 hours to contain the spread of new strain of coronavirus. – Europe on Wednesday began lifting travel bans on Britain put in place to contain a new fast-spreading Covid strain while WHO experts were set to meet on a response to it. Britain announced on Tuesday it had reached an agreement with France to allow lorry drivers stranded in the UK following the closure of the border to leave, provided they take a lateral flow Covid-19 test. (Photo by William EDWARDS / AFP) (Photo by WILLIAM EDWARDS/AFP via Getty Images)

A Polish driver stuck at the border said on Wednesday: “We are sick of this — I’ve been in Dover for two days and want to go home for Christmas. The French said their border was being opened, but we haven’t seen any evidence of this being true.”

“There’s thousands of people queuing to get through the port and the roads are all at a standstill. Nobody wants another night sleeping in their cab,” he added.

Remainers in Britain have been quick to seize upon the chaos on the border as a failure of Brexit, but Britain is still under EU control until the end of the year, when the Brexit transition period ends.

The Secretary of State for European affairs in the French government, Clément Beaune, wrote on social media that the scenes at the border were for “all the pseudo-patriots who praise the permanent closure of borders every day”.

In response, Brexit leader Nigel Farage wrote: “No Deal is better than an agreement with people that hate us.”

The “psuedo-patriots” didn’t close the borders though, did they? The French Government did that.

The scene pictured below is the fault of Macron’s much-vaunted, pro-EU, centrist administration. https://t.co/IbulMlLRaY