A Rwandan migrant has been detained after a suspected arson attack gutted the Cathedral of St Peter and St Paul in Nantes, France.

The authorities currently believe the Roman Catholic sanctuary, also known as Saint-Pierre-et-Saint-Paul or simply Nantes Cathedral, was torched deliberately, with an investigation suggesting three fires were lit inside: “one at the level of the great organ and two fire starts to the left and to the right of the nave”.

Thankfully, the cathedral — begun in 1434 and constructed over hundreds of years, with the finishing touches completed only in 1891 — was not as badly damaged as Notre-Dame in Paris in 2019, although its grand organ, some historic stained glass windows, and other fixtures were lost to the inferno.

The 39-year-old migrant detained following the blaze, according to French reports, worked for the diocese, and was angry over difficulties he had been having with his expired visa — although the authorities have cautioned against leaping to conclusions about his involvement in the fire. 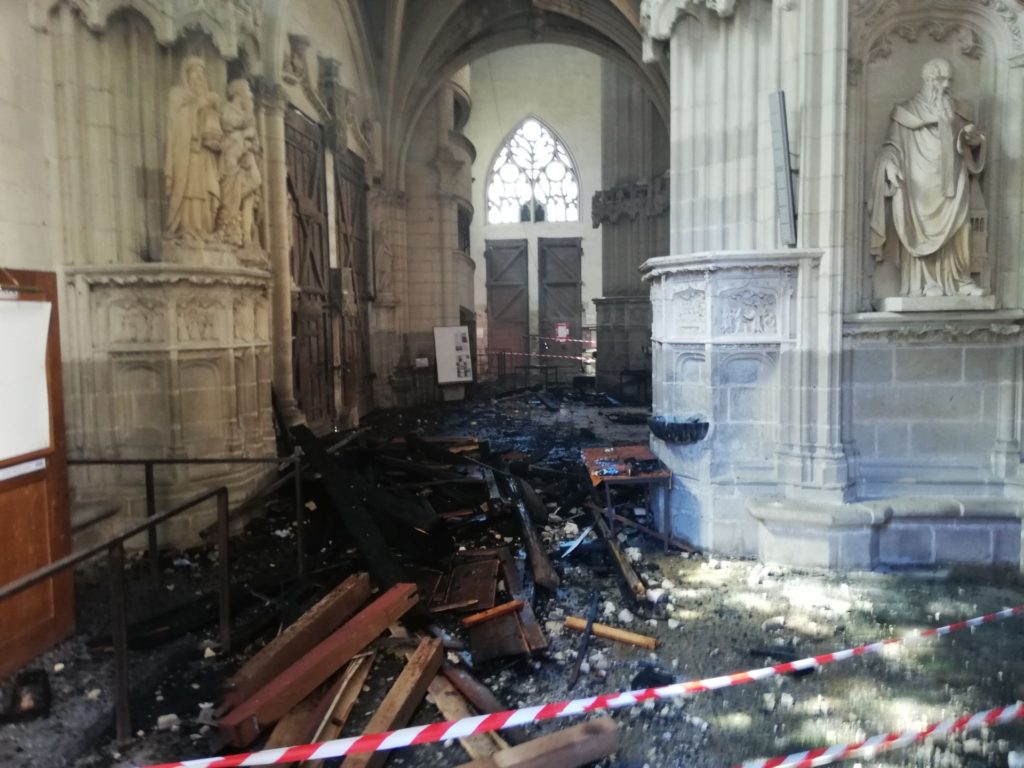 TOPSHOT – This photograph taken on July 18, 2020, shows the remains of the burnt organ after falling from the 1st floor during a fire inside the Saint-Pierre-et-Saint-Paul cathedral in Nantes, western France. – A blaze that broke inside the gothic cathedral of Nantes on July 18 has been contained, emergency officials said, adding that the damage was not comparable to last year’s fire at Notre-Dame cathedral in Paris. “The damage is concentrated on the organ, which seems to be completely destroyed. Its platform is very unstable and could collapse,” regional fire chief General Laurent Ferlay told a press briefing in front of the cathedral. (Photo by Fanny ANDRE / AFP) (Photo by FANNY ANDRE/AFP via Getty Images)

Prosecutors said it would be “premature and hasty” to brand the migrant, who was apparently responsible for locking the cathedral up the day before the fire, as an arsonist.

It appears he was taken into custody because there are inconsistencies in his timetable — but Nantes public prosecutor Pierre Sennès has stressed that this is “normal procedure” and that, so far, the authorities are not working under the assumption that he started the blaze.

Jean-Charles Nowak, a clerk at the cathedral, has defended the unnamed migrant, saying he “adores” the building.

“I don’t believe for a second that he could have set the cathedral on fire,” Nowak said.

A fire in the 15-century cathedral in the French city of Nantes blew out stained-glass windows and destroyed the grand organ https://t.co/Xgn4tVsFNy pic.twitter.com/ELlwbnxb9Y