The United Nations Office at Geneva (UNOG) has removed a social media post that defended the right of Antifa to “freedom of expression” and “peaceful assembly” after considerable backlash following a report from Breitbart News.

The now-deleted post, which also displayed the far-left movement’s flag, said: “UN Human Rights experts express profound concern over a recent statement by the US Attorney-General describing Antifa and other anti-fascist activists as domestic terrorists, saying it undermines the rights to freedom of expression and of peaceful assembly in the country.” 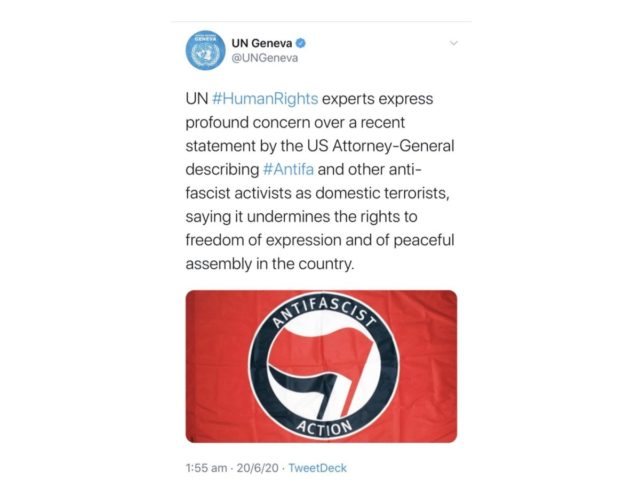 On Friday, Breitbart News reported that one of the experts the UN cited was Fionnuala Ní Aoláin, a UN Special Rapporteur who also works as the Board Chair on the left-liberal billionaire George Soros’s Open Society Foundations Women Program.

The defence of Antifa from the United Nations sparked a substantial backlash on social media, with many calling for the United States to “defund” the international body.

The Trump Administration has called for the anarcho-communist group to labelled as a terrorist organisation after reports indicated that supporters played a part in the widespread riots in America which have followed the death of George Floyd.

The United Nations Office at Geneva (UNOG) posted the flag of Antifa on its official Twitter account. https://t.co/aLlSsGCUxa

The United Nations Human Rights Council also agreed on Friday in Geneva to commission a report on supposedly systemic racism and discrimination against black people in America, in order “to contribute to accountability and redress for victims”.

The decision was prompted by a petition from the brother of George Floyd, Philonise Floyd, who called on the UN to investigate racism and police brutality in the U.S.

In response to the move by the international body, U.S. Secretary of State Mike Pompeo said that the Human Rights Council is “a haven for dictators and the democracies that indulge them”.

“If the Council were serious about protecting human rights, there are plenty of legitimate needs for its attention, such as the systemic racial disparities in places like Cuba, China, and Iran,” Pompeo said in a statement on Saturday.

In 2018, the Trump administration withdrew from the UN Human Rights Council. America’s then-Ambassador to the United Nations, Nikki Haley, said at the time: “This step is not a retreat from human rights commitments. On the contrary, we take this step because our commitment does not allow us to remain a part of a hypocritical and self-serving organization that makes a mockery of human rights.”

Other members to have been voted on to this human rights council:

Remind me again why the US pays 22% of the UN budget?