The president of Albania has decried the “mafia” government of his own country after the state apparently launched a midnight demolition raid against the National Theatre building, police having first rounded up demonstrators.

The sudden night-time demolition — which took place as people still stood in the square surrounding the National Theatre — came after two years of protests against the plans to tear down the building and replace it with an expensive new ultra-modernist design.

The long-standing plan of Albania’s socialist Prime Minister Edi Rama has been to demolish the 1930s-era National Theatre in Tirana and to turn over the land to a private developer. In return for this, the developer was to build a smaller theatre and use the rest of the space for private high-rise towers.

The scheme for the new £30 million building was created by design studio BIG in the now ubiquitous globalist-modernist style and the developer chosen — protesters allege — without being put to tender, and going to a preferred partner of the government.

The unsympathetic scheme does not compliment, reflect, or interact with its historic setting, but has at least been praised by fellow modernists for resembling an enormous bow-tie.

Protests over the plan have raged since 2018, with anti-demolition Albanians accusing the government of cronyism and corruption, and of trying to erase the country’s past — the theatre was built during Italy’s occupation of Albania. Socialist Rama’s government, for their part, claim the demonstrators simply oppose all development, or progress in general.

Some now claim the fact the Rama-backed demolition moved under cover of night and during the coronavirus lockdown show a collapse in the nation’s democracy. One protester cited by the Reuters news agency remarked: “This is no longer about the theatre’s demolition but the downfall of democracy and freedom. We are in a dictatorship.”

Regional news aggregator BalkanInsight reports before the unscheduled demolition took place, officers of the Albanian police moved into the square at night, clearing away the small number of protesters who remained at the late hour. Further arrests took place the following day when a larger protest against the demolition occurred.

Among those arrested were artists, journalists, and even a member of parliament — Monika Kryemadhi — who is married to the Albanian president. All were released later, but the government published a statement reminding would-be protesters that public gatherings are banned in the country because of coronavirus.

Demonstrators have also called into question the legality of the demolition. Orders passed by the city council only become enforceable after ten days — in this case, the order went from enaction to execution in just three.

Ilir Meta, the president of Albania, slammed the national government for the demolition, describing how at the “peak of darkness” an excavator swung its jib at the front tower of the theatre. Appearing to describe the government as a “mafia”, the president said the act was a “constitutional, legal, and moral crime” which demonstrated there is no rule of law in Albania.

Perhaps most damningly, President Meta compared the midnight demolition to the socialisation of the country by Albania’s Communist dictator Enver Hoxha. In 1967, Hoxha’s government declared the nation “the first atheist state in the world”, having first seized every church, shrine, and mosque in the country.

The leader of the Albanian opposition, Lulzim Basha of the Democratic Party, echoed the president’s comments, calling the move illegal and remarking the demolition was a strike at the “foundations of society”.

The first-strike of having collapsed the facade done overnight, the demolition continued on Sunday, sealing the fate of the old building. What will happen next is unclear; however, with elections not due in Albania until 2021, it is likely the land will be handed over and construction on the new will take place as the government planned. 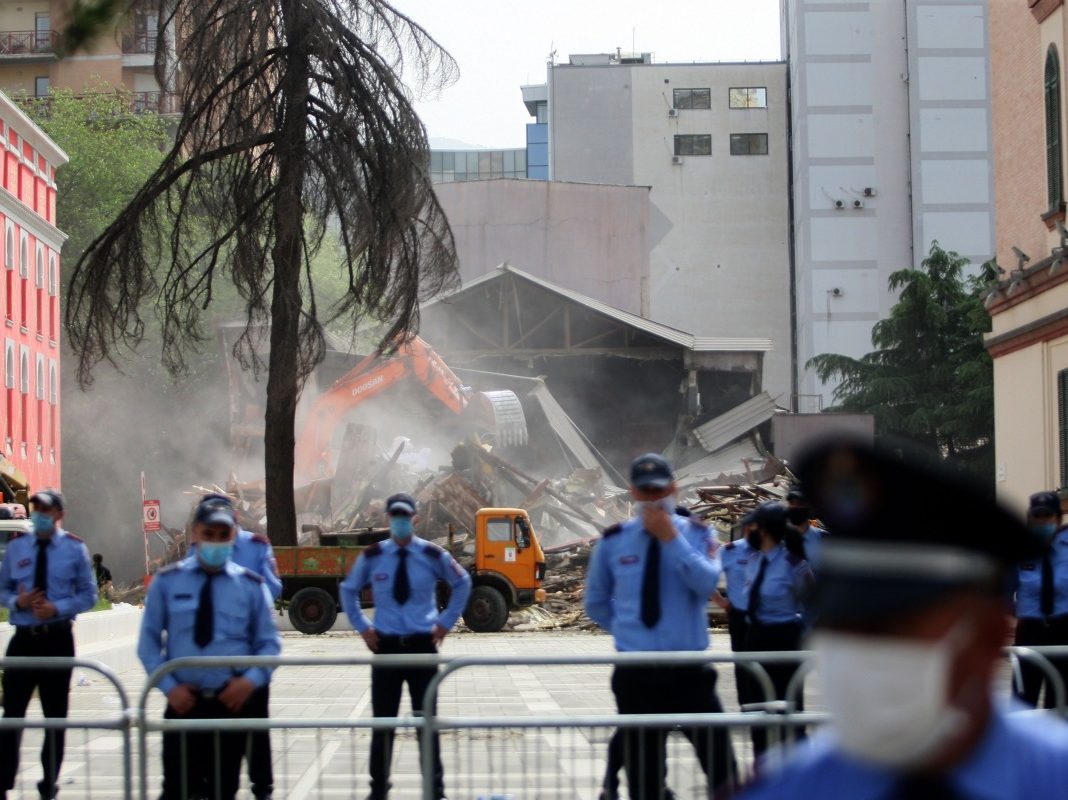 Albanian police forces secure the area around the demolished 70-year old neoclassical building of the National Theatre, on May 17, 2020. – Albanian police Sunday clashed with protesters including opposition supporters angry over the demolition of the national theatre, leading officers to detain nearly 40 people. (Photo by Gent SHKULLAKU / AFP) (Photo by GENT SHKULLAKU/AFP via Getty Images)