Prime Minister Boris Johnson remained in hospital overnight after his admission for “tests” — but ministers claim he is still “very much in charge”.

Prime Minister Johnson was confirmed as having been infected with the Chinese coronavirus on March 27th, on the same day as the Health Secretary, Matt Hancock.

However, while Hancock now appears to be recovered and has left self-isolation, the Prime Minister remains unwell, with insiders suggesting he has been “coughing and spluttering” on conference calls, and his pregnant fiancée Carrie Symonds has also been bedridden with virus symptoms for some time.

Johnson has now been admitted to hospital as a “precautionary measure”, according to a spokesman — perhaps because his symptoms have now persisted for long enough that he may be at risk of developing pneumonia.

More details have now emerged about the medical treatment being received by UK Prime Minister Boris Johnson. London newspaper The Times reports the PM was driven to St Thomas’s Hospital, which is directly across the river Thames from the Houses of Parliament, by private car and did not need to be taken by hospital, and was not admitted as an emergency case.

Nonetheless, the PM was administered an oxygen treatment on Sunday night. Because coronavirus causes damage to the lungs, the oxygen saturation of the blood in victims can fall to dangerously low levels, which is why the availability of ventilators is a key bottleneck in the UK National Health Service’s national response to the virus. 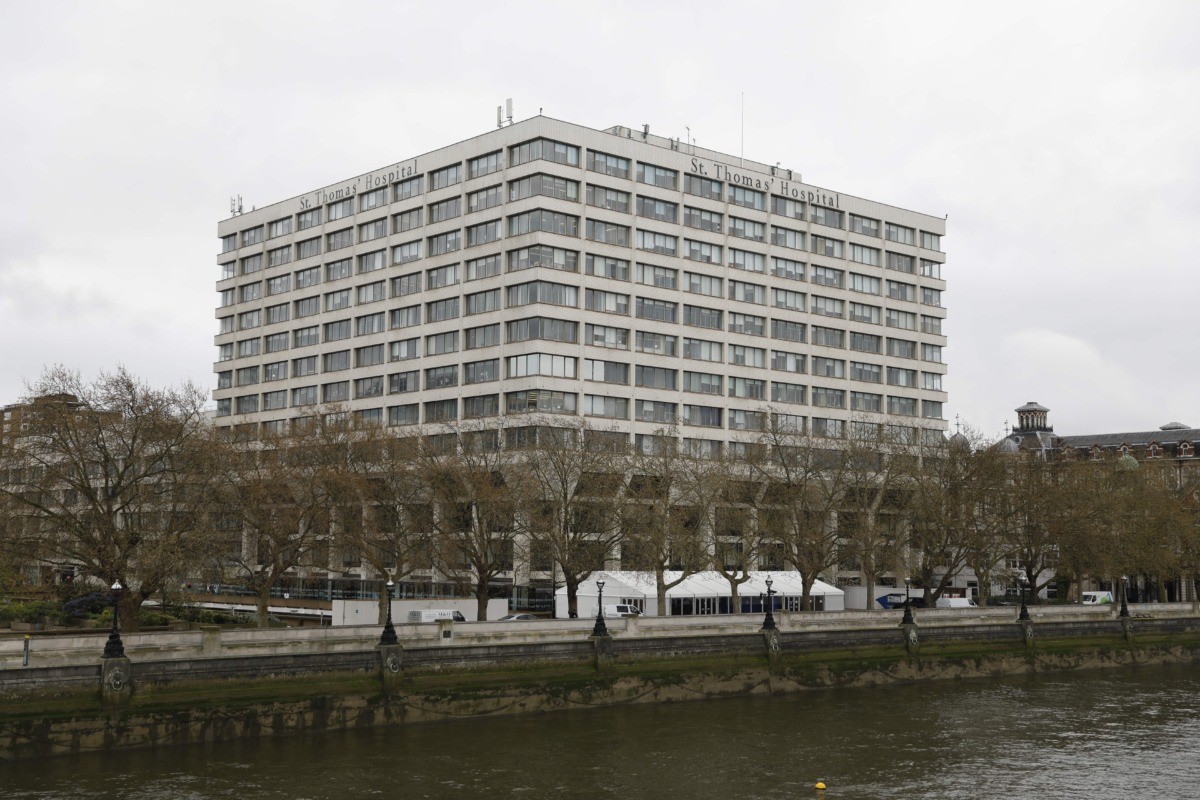 A picture shows St Thomas’ Hospital in London on April 6, 2020. – British Prime Minister Boris Johnson was in hospital on Monday undergoing tests after suffering “persistent” symptoms of coronavirus for 10 days, but colleagues insisted he remains in charge of the government. Reports have suggested that the prime minister was admitted to nearby St Thomas’ Hospital last night. (Photo by Tolga AKMEN / AFP) (Photo by TOLGA AKMEN/AFP via Getty Images)

The original story continues below

Nevertheless, the Secretary of State for Housing, Communities, and Local Government, Robert Jenrick, has told the BBC that the 55-year-old remains “very much in charge of the Government”.

“He spent the night in hospital and of course we all wish him well and we hope that as a result of these tests he will be able to come back to Downing Street as soon as possible,” Jenrick said.

“He’s been working extremely hard leading the government and being constantly updated. That’s going to continue. Obviously today he’s in hospital having the tests but he will continue to be kept informed as to what’s happening and to be in charge of the government.

“I hope, I think we all do, that he has a speedy recovery and that he gets back to Number 10 and takes charge in the way he would want to as soon as possible.

“I’m sure this is very frustrating for him, for somebody like Boris who wants to be hands running the government from the front, but nonetheless he’s still very much in charge of the government.”

Jenrick’s comments do not seem to amount to a claim that the Prime Minister “can run [the] country from hospital bed” as has been reported in the Guardian, however, with Dominic Raab — the Foreign and Commonwealth Secretary and “designated survivor” — apparently set to chair today’s coronavirus meeting.