A man has been shot following multiple stabbings in Streatham, South London, in an incident which has been declared “terrorist-related”.

The man, said to have been shot by Metropolitan Police officers, is confirmed dead.

Security sources have told Sky News they believe the attack was “Islamist” in nature, and he is believed to have been under active surveillance by police when he struck — which perhaps explains why their response to the attacks was so rapid, relatively speaking.

Prime Minister Boris Johnson has responded to the attack on social media, thanking “all emergency services responding to the incident in Streatham, which the police have now declared as terrorism-related” and offering his “thoughts are with the injured and all those affected.”

#INCIDENT A man has been shot by armed officers in #Streatham. At this stage it is believed a number of people have been stabbed. The circumstances are being assessed; the incident has been declared as terrorist-related. Please follow @metpoliceuk for updates

Information about casualties is scant, although three people are said to have been wounded, and videos on social media purporting to show the aftermath of the attack suggest, at the minimum, very serious injuries.

Early reports indicated the shot man may have been carrying a device in a bag or wearing a vest of some kind — a detail which has now been confirmed. The object is believed to be safe, however.

A radical Islamic terrorist who killed multiple people at London Bridge in December 2019 after being freed from prison early was wearing a suicide bomb belt which turned out to be a fake. 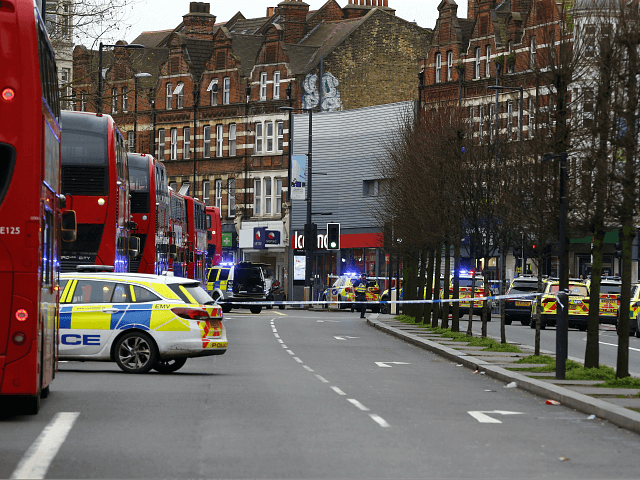 LONDON, ENGLAND – FEBRUARY 02: Police officers at the scene after a man was shot and killed by armed police on February 2, 2020 in London, England. The Metropolitan police have said that a number of people had been stabbed during a terrorist-related incident in Streatham. (Photo by Hollie Adams/Getty Images)

This story is developing…