Boris Johnson is considering moving the entire upper chamber of the British Parliament to the north of England in a bid to spread government more evenly across the country. This begs the question, what has York done to deserve this?

While arguments over the political wisdom of splitting Parliament in two and putting one chamber at the end of a three-hour railway journey rage on, ultra-rich, detached from reality star architects will already be salivating at the prospect at another bottomless pit of taxpayer’s money to fund a new design. The evidence of this comes with the depressing and inevitable slate of attention-seeking proposals floated every time the chance to further vandalise a city comes along.

This is the case because, despite the occasional positive noises made by junior government ministers about wanting to make Britain more beautiful, the only schemes that will get a look-in for selection will be of the anonymous, globalist plate glass type.

This will be a tragedy for York, frequently cited as Britain’s most beautiful city and one of the less spoilt by the ravages of modernism. It will be a tragedy for taxpayers, who will fund the enormously expensive vanity project. But it will be a triumph for the architects, who can look forward to a guaranteed Stirling prize, a peerage, and maybe a RIBA gold medal, too.

Most distressed to hear the govt is moving the Lords to York. Not because it is a bad idea, but at this very moment modernist 'architects' are salivating at a prospective multi-£billion commission to further vandalise a great city with another monstrous heap of glass and steel. pic.twitter.com/lbcVMWXZLD

The United Kingdom, of course, has strong form on building unnecessary parliaments whose nonsensical, anti-human architecture is rivalled only by the spectacular cost overruns always associated with them. Most deserving of mention are the Scottish and Welsh Parliaments, products of Tony Blair’s push for devolution and both built despite more cost-effective existing buildings being offered for use.

Indeed, while the final cost to build Scotland’s aggressively modernist Parliament building — with it’s sometimes collapsing, sometimes leaking roof — was four times higher than the early realistic estimates, the commission to design the new complex went to Spanish architect Enric ‘El Collapso’ Miralles despite another building being available. The impressive neo-classical New Parliament House, which overlooks Edinburgh from Calton Hill had already been converted to a Parliament building with a debating chamber and offices ready for a Scottish assembly and has sat empty, in pristine condition, ever since.

While excuses were made over why the grand parliamentary building was not suitable for the purpose, the newbuild was delivered three years late, its cost having swollen from £100 to £400 million, and has been beset with ongoing structural and quality issues since. 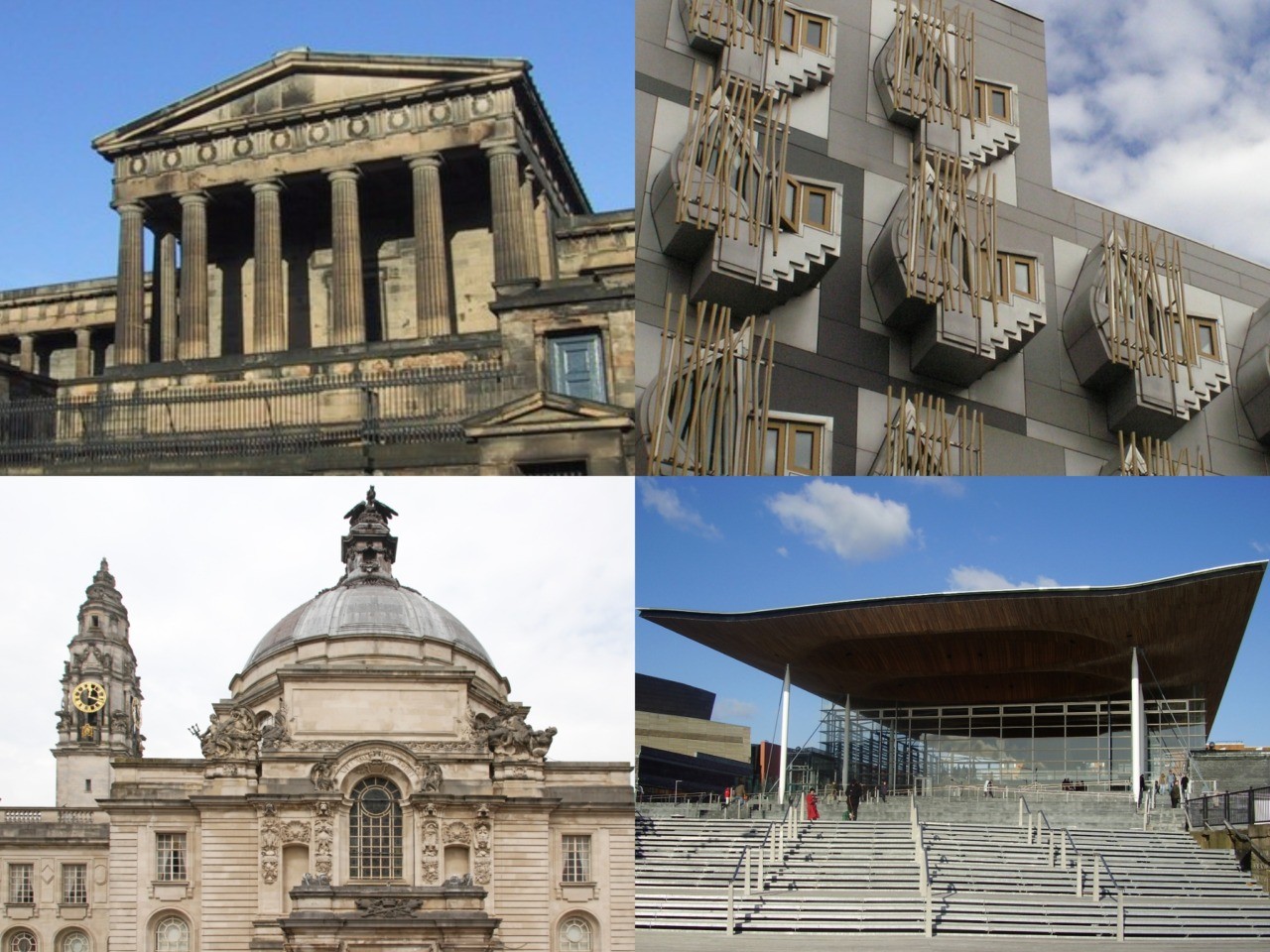 (Above, left)New Parliament House, refurbished in the 1970s to house the Scottish assembley but ultimately snubbed for a (above, right) new build. The same happened in Wales when an existing building (below, left) was rejected for a new build (bottom, right) several times more expensive / Creative Commons Images

In Wales, a host of potential homes for the new devolved parliament were considered including several castles and Cardiff City Hall, which was finally knocked out of the competition, considered too expensive for the taxpayer at £17 million. Instead, a new building in the style of a modern bus station was commissioned on the waterfront for an eye-watering £70 million, several times over budget and completed nearly five years behind schedule.

And so it goes on. The Lords will be forced to move this decade whether they like it or not — Barry and Pugin’s incredible but now over 150-year-old Parliament buildings in London are desperately in need of renovation and that means vacating the premises for five years or more. Yet rather than seeking value for taxpayers by finding a suitable building to temporarily decamp to as the Commons are, the government is to send them north.

Politically astute, perhaps, given the Conservative’s need to solidify their newfound support in the north of England. But a historic, largely intact, and globally loved architectural gem like York deserves better than another modernist, plate glass, budget-busting carbuncle fostered upon it.