A group of French Republican politicians have sounded a “state of emergency” on 75 Paris Churches, each of which face a potential Notre Dame level catastrophic event if left without urgent remedial work, a statement after the world-famous Medieval cathedral suffered a catastrophic fire in April.

At the time of the fire, Notre Dame was undergoing urgent repair work to the roof, part of an underfunded programme which had been denied money by the French government, despite the state owning the building. Now conservative [Republican party] politicians have sounded a warning over the state of health of 75 other churches in Paris, warning that each could face a similar fate without intervention and repair work. 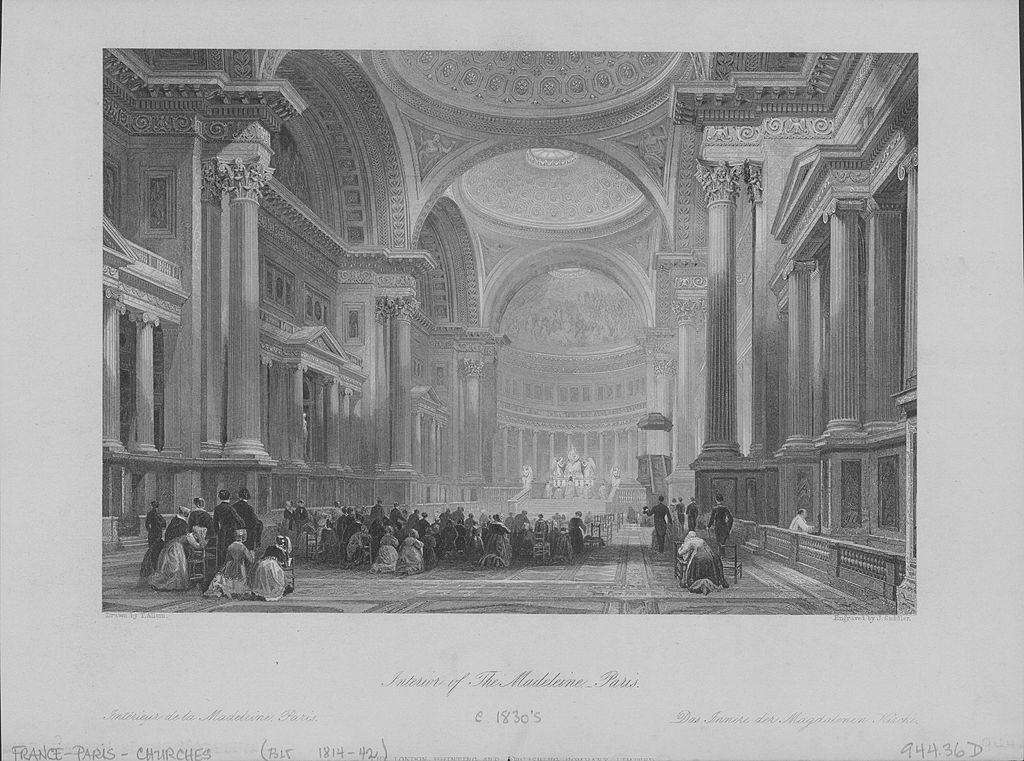 Engraving of the interior of the Madeline Church, a Neoclassical Roman Catholic church north of the Place de la Concorde and west of the Place Vendome, engraved by J. Saddler, Paris, circa 1830. (Photo by Archive Photos/Getty Images)

As well as calling for a significant investment of money — the report calls for 33 million Euros a year to be spent on preventing the major historical buildings being destroyed — the lawmakers also look to improving education in relevant subjects. The report recognises the need for a new generation of builders and craftsmen with traditional skills able to maintain some of the vast religious buildings that became the property of the French state in 1905.

The report described the training plan as “…mobilization of the schools of applied arts and engineers, to train the required craftsmen on these building sites.”

Among the buildings cited in a report of the dialogue by French centre-right newspaper Le Figaro is the Madeleine Cathedral in Paris’s 8th district [pictured, above], which has scaffolding in the building’s colossal porch to support a crack in the monumental masonry above. This “temporary” structure looming above the entrance to a church built to celebrate the glory of France has been in place since 1998, the paper reports.

Another among the 75 “small Note Dames” — 11 of which are in such disrepair they are described as being in a state of “absolute emergency” — is Saint-Anne de la Butte-aux-Cailles, a 13th-century church facing total closure due to unsafe stonework.

Attention has focussed on France’s churches in the wake of the Notre Dame fire, which destroyed almost all the surviving Medieval wooden structure of the cathedral, leaving just the hollow stone walls. As well as churches in dire need of support to ward off structural damage from neglect, several have been the targets of attacks and vandalism.

Amid a spate of church attacks in France, Breitbart London reported in April on the historic Paris Basilica best known as the resting place of French Kings including the tomb of Charles Martel when its main organ was damaged and stained glass windows were smashed.

French Church Is Ninth in Eleven Days Vandalised Across the Country https://t.co/8s0i4B0iLh