As the sun rose Thursday over the Normandy coastline where thousands of men bled and died 75 years ago, a fast-diminishing number of World War II veterans remembered D-Day and hoped the world never forgets the sacrifices made to dismantle Nazi tyranny.

The sea of mercury blue couldn’t have been more peaceful as day broke over Omaha Beach, the first of five code-named beaches where the waters ran red the morning of June 6, 1944, when Allied forces came ashore to push the Nazis out of France.

Hundreds of people, civilians and military alike, hailing from around the world, gathered at the water’s edge, remembering the troops who stormed the fortified Normandy beaches to help turn the tide of the war and give birth to a new Europe, since at peace.

On the western edge of Omaha, dense crowds formed a human chain and tossed red and white chrysanthemums into the gently lapping waves, remembering. Veterans’ descendants spoke about family members who fought on the beach and laid red roses at the feet of a statue of an infantryman clutching a rifle and hauling a fallen comrade. 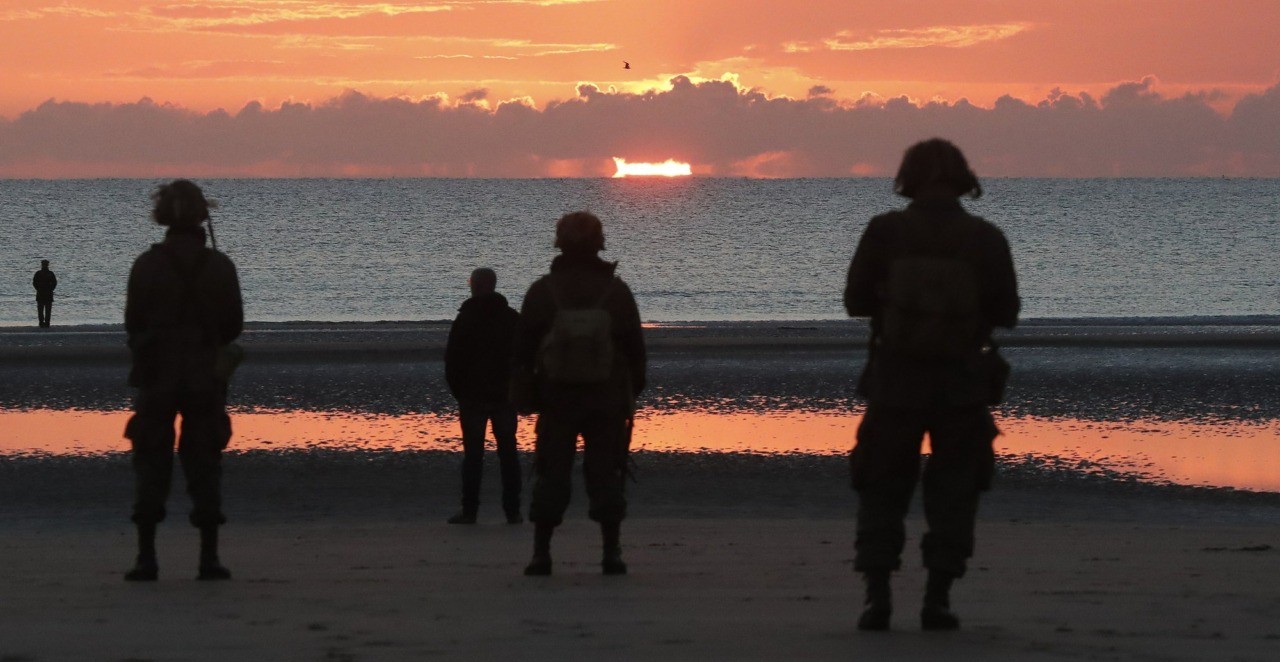 Dragging them behind a large chunk of concrete on Omaha Beach, Army medic Ray Lambert saved many people on D-Day before his own four wounds forced him to be evacuated. But as he stands on that Normandy beach ahead of the battle’s 75th anniversary, the 98-year-old told the AP, he thinks most about the ones he couldn’t help.

“It is sobering, surreal to be able to stand here on this beach and admire the beautiful sunrise where they came ashore, being shot at, facing unspeakable atrocities,” said 44-year-old former U.S. paratrooper Richard Clapp, of Julian, North Carolina.

After Britain’s spirited anniversary tribute Wednesday to the derring-do of the Allied forces that set off from England to defend democracy, France is hosting a series of solemn ceremonies Thursday in the country where so many young lives ended in sand and sea.

Gratitude was a powerful common theme. 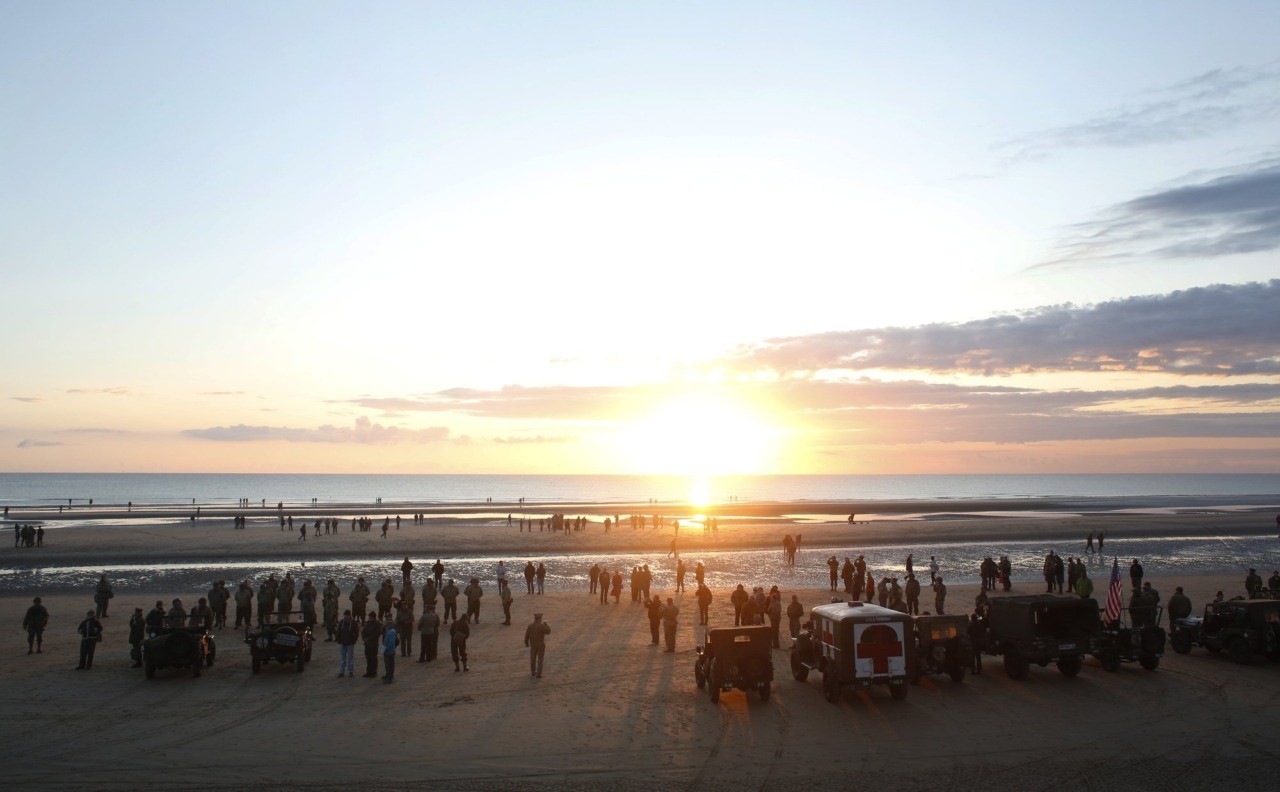 “Thank you to all those who were killed so that France could become free again,” French President Emmanuel Macron said Thursday, standing with British Prime Minister Theresa May and uniformed veterans overlooking Gold Beach.

They were taking part in a ceremony laying the cornerstone of a new memorial that will record the names of thousands of troops under British command who died on D-Day and ensuing Battle of Normandy.

“If one day can be said to have determined the fate of generations to come, in France, in Britain, in Europe and the world, that day was the 6th of June, 1944,” May said.

“As the sun rose that morning,” she said, note one of the thousands of men arriving in Normandy “knew whether they would still be alive when the sun set once again.”

To the veterans, she said “the only words we can — thank you.” 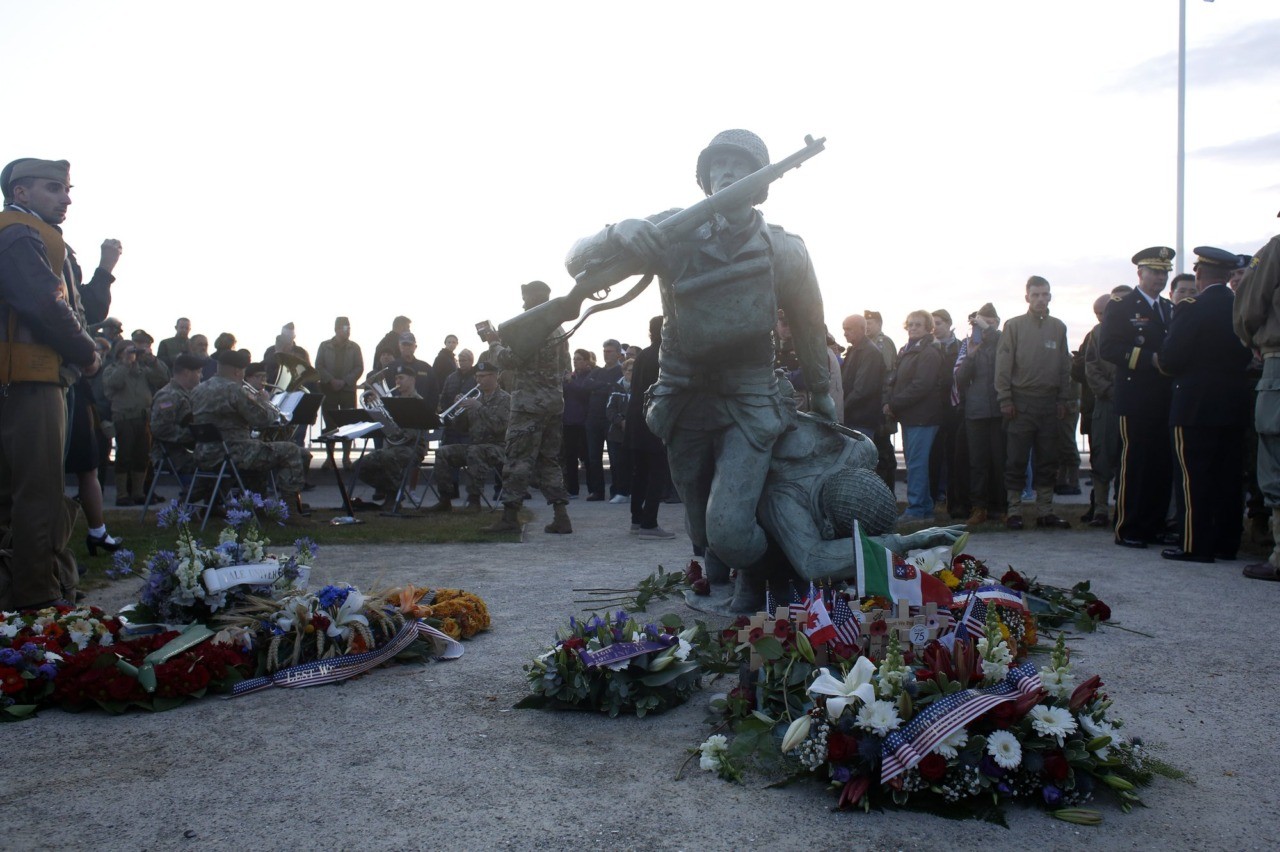 floral tributes are placed at the National Guard Monument Memorial as members of the USAREUR band plays in the background near Omaha Beach, in Normandy, France, Thursday, June 6, 2019 during commemorations of the 75th anniversary of D-Day. (AP Photo/Thibault Camus)

Dick Jansen, 60, from the Netherlands, drank Canadian whisky from an enamel cup on the water’s edge, where people held moments of silence and some saluted.

“Every time we come here, we drink at the moment they came onto the beach, a whisky for the guys who came no further,” he said.

Norwegian Sigrid Flaata drove from Oslo in a 1942 restored jeep to honour the soldiers who died on D-Day. Belgian Filip Van Hecke called his journey a “small effort to pay homage.”

A group of five Americans parachuted into Normandy on Wednesday as part of a commemorative jump, and showed up on the beach Thursday morning still wearing their jumpsuits, all World War II-era uniforms, and held an American flag. All five said they fear that the feats and sacrifices of D-Day are being forgotten. 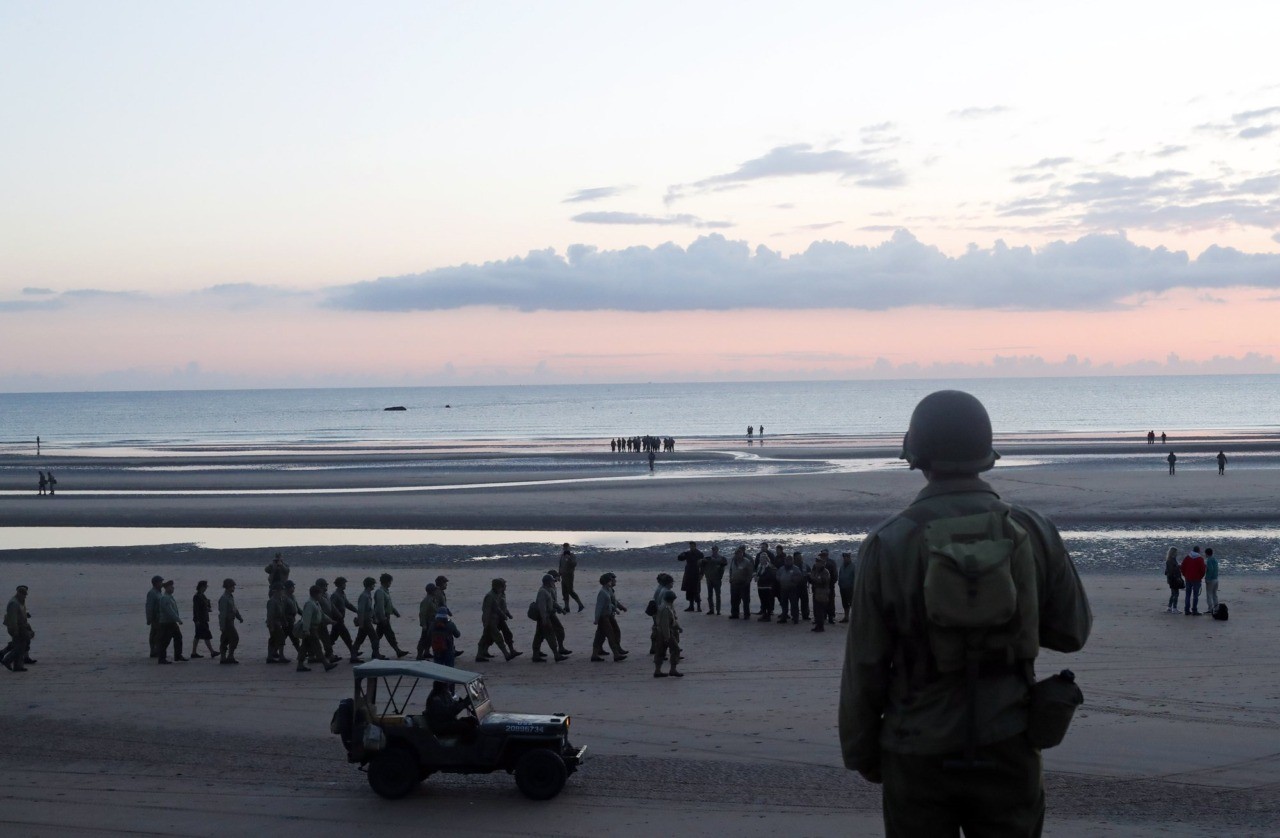 A World War II reenactor looks out over Omaha Beach, in Normandy, France, at dawn on Thursday, June 6, 2019 during commemorations of the 75th anniversary of D-Day. (AP Photo/Thibault Camus)

French President Emmanuel Macron and President Donald Trump will look out over Omaha Beach, the scene of the bloodiest fighting, from the cemetery with grave markers for over 9,000 Americans, servicemen who established a blood bond between the U.S. and its trans-Atlantic allies.

“I have all kinds of friends buried,” said William Tymchuk, 98, who served with the 4th Canadian Armored Division during some of the deadliest fighting of the brutal campaign after the Normandy landings.

“They were young. They got killed. They couldn’t come home,” Tymchuk, who was back in Normandy, continued.

“Sorry,” he said, tearing up. “They couldn’t even know what life is all about.”

The biggest-ever air and seaborne invasion took place on D-Day, involving more than 150,000 troops that day itself and many more in the ensuing Battle of Normandy. Troops started landing overnight from the air, then were joined by a massive force by sea on the beaches code-named Omaha, Utah, Juno, Sword, and Gold, carried by 7,000 boats.

In that defining moment of military strategy confounded by unpredictable weather and human chaos, soldiers from the U.S., Britain, Canada and other Allied nations applied relentless bravery to carve out a beachhead on ground that Nazi Germany had occupied for four years. 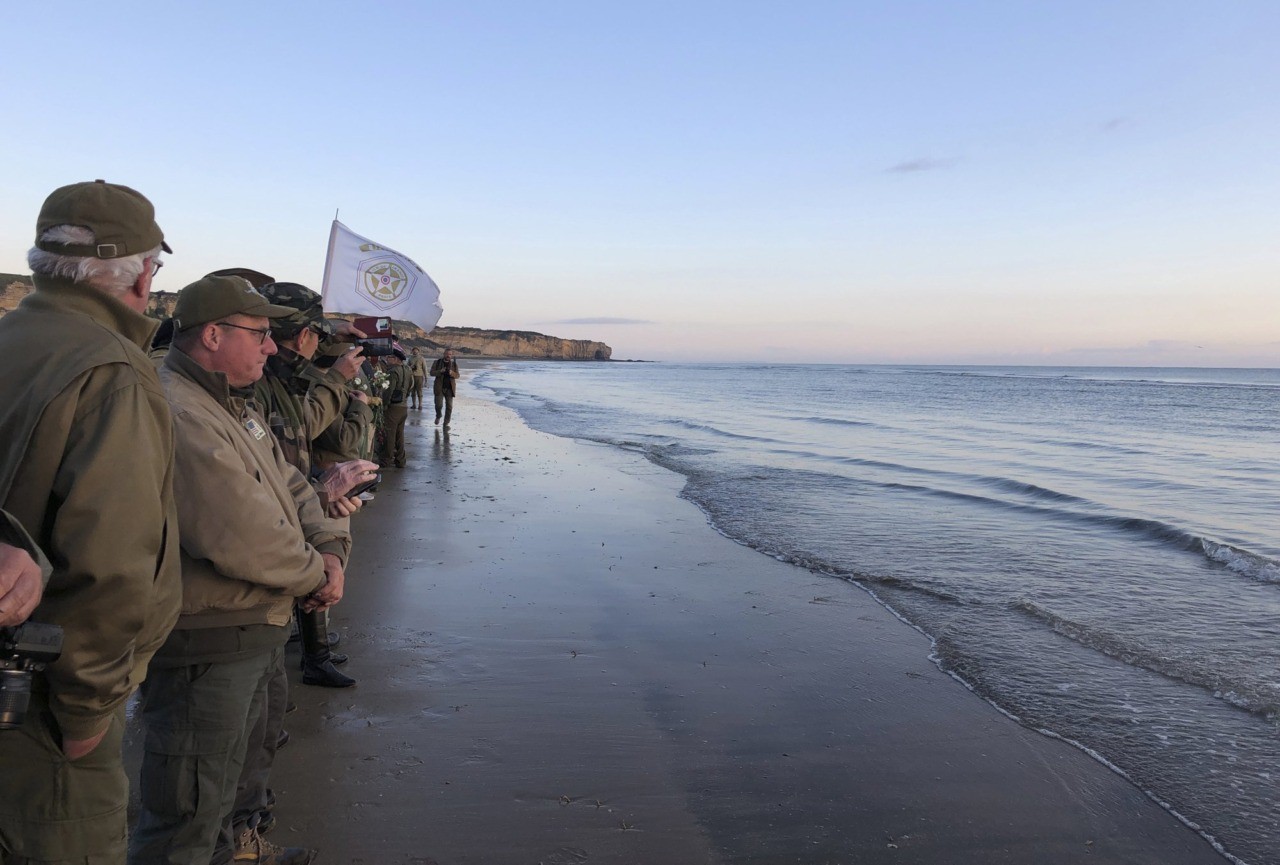 “The tide has turned! The free men of the world are marching together to Victory,” Gen. Dwight D. Eisenhower predicted in his order of the day.

Still, that single day cost the lives of 4,414 Allied troops, 2,501 of them Americans. More than 5,000 were injured. On the German side, several thousand were killed or wounded.

From there, Allied troops would advance their fight, take Paris in late summer and march in a race against the Soviet Red Army to control as much German territory as possible by the time Adolf Hitler died in his Berlin bunker and Germany surrendered in May 1945.

The Soviet Union also fought valiantly against the Nazis — and lost more people than any other nation in World War II — but those final battles would divide Europe for decades between the West and the Soviet-controlled East, the face-off line of the Cold War.

“The heroism, courage and sacrifice of those who lost their lives will never be forgotten,” said Queen Elizabeth, who was an army mechanic during World War II while her father George was king. “It is with humility and pleasure, on behalf of the entire country — indeed the whole free world — that I say to you all, thank you.”