President Donald J Trump has mocked the “organized flops” that have been the recent anti-Trump protests during his three-day State Visit to the United Kingdom.

The President remarked on Wednesday morning: “I kept hearing that there would be ‘massive’ rallies against me in the UK, but it was quite the opposite.

“The big crowds, which the Corrupt Media hates to show, were those that gathered in support of the USA and me. They were big & enthusiastic as opposed to the organized flops!”

I kept hearing that there would be “massive” rallies against me in the UK, but it was quite the opposite. The big crowds, which the Corrupt Media hates to show, were those that gathered in support of the USA and me. They were big & enthusiastic as opposed to the organized flops!

President Trump made a similar observation on Tuesday during the joint press conference with Prime Minister Theresa May, where he said: “I don’t see any protests. I did see a small protest today — very small — so a lot of it is fake news, I have to say. But you saw the people waving the American flag, waving your [British] flag. There was tremendous spirit — and love, there was great love. There was an alliance.”

Even establishment media outlets, including Britain’s Sky News, admitted that there were far fewer protesters than had been billed by organisers. Reuters described them as “far smaller” than those at President Trump’s working visit to the UK in July 2018, while Bloomberg said they were “smaller than expected”.

A number of Trump supporters attended counter-protests, while a London landlord renamed his pub The Trump Arms and held a celebratory event, but the manifestations on London’s streets of pro-Trump banners and Old Glory sparked aggression from the far-left. 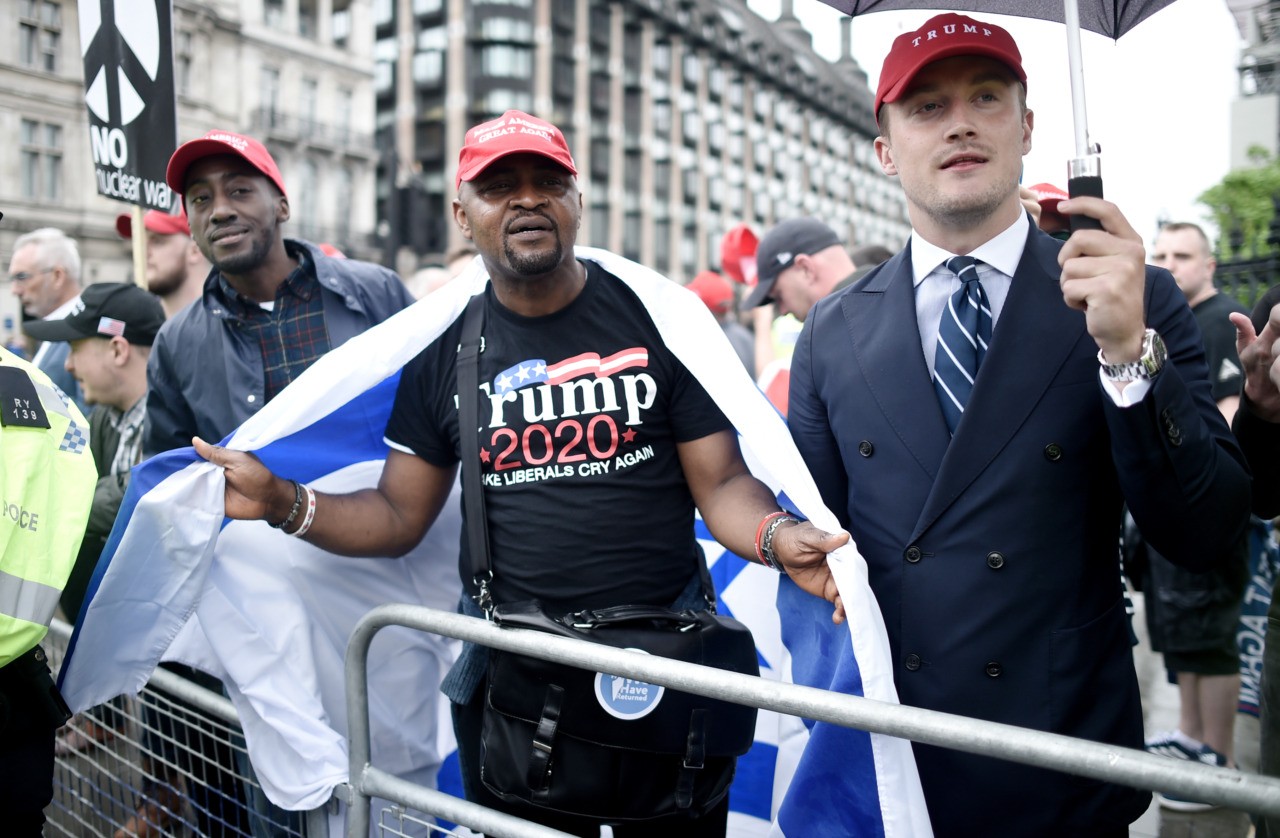 LONDON, ENGLAND – JUNE 04: Supporters of the U.S. President watch protesters attending an anti-Trump demonstration outside the Houses of Parliament on the second day of U.S. President Donald Trump’s State Visit on June 4, 2019 in London, England.  (Photo by Peter Summers/Getty Images)

British media reported that London’s Metropolitan police had barricaded around 20 Trump supporters into the Lord Moon of the Mall pub on Tuesday. The Metro reports that far-leftist agitators yelled “Nazi scum, off our streets!” as police moved Trump supporters away.

Spokesman for Scots for Trump, Alastair Mcconnachie, told the Metro that his group had come down from Glasgow “to show that there are people in Scotland who are for Donald Trump. We respect the man as an individual and we respect the office of the President of the United States.”

“We in particular like Trump for [a number of] reasons,” Mr Mcconnachie said, adding: “One, he’s pro-Brexit and there are over a million people in Scotland who are pro-Brexit.

“Secondly, we respect him because he puts his own country first, he puts America first, he stands up for the American working class. And he does so through the principle of borders.”

A Trump supporter is milkshaked by a hostile crowd in Parliament Square.

In a direct act of assault against a Trump supporter captured on video, a middle-aged man was surrounded by far-leftists who chanted “Nazi scum” in his face — one of which was later revealed to work for the NHS — before a masked protester threw a milkshake on the gentleman’s head while a frightened female police officer looked on.

On Wednesday, President Trump travelled to Portsmouth to mark the 75th anniversary of the D-Day landings, with protests following him to the south-England port.

The protests during the commemoration were slammed as “disrespectful” by one veteran speaking to the Express. 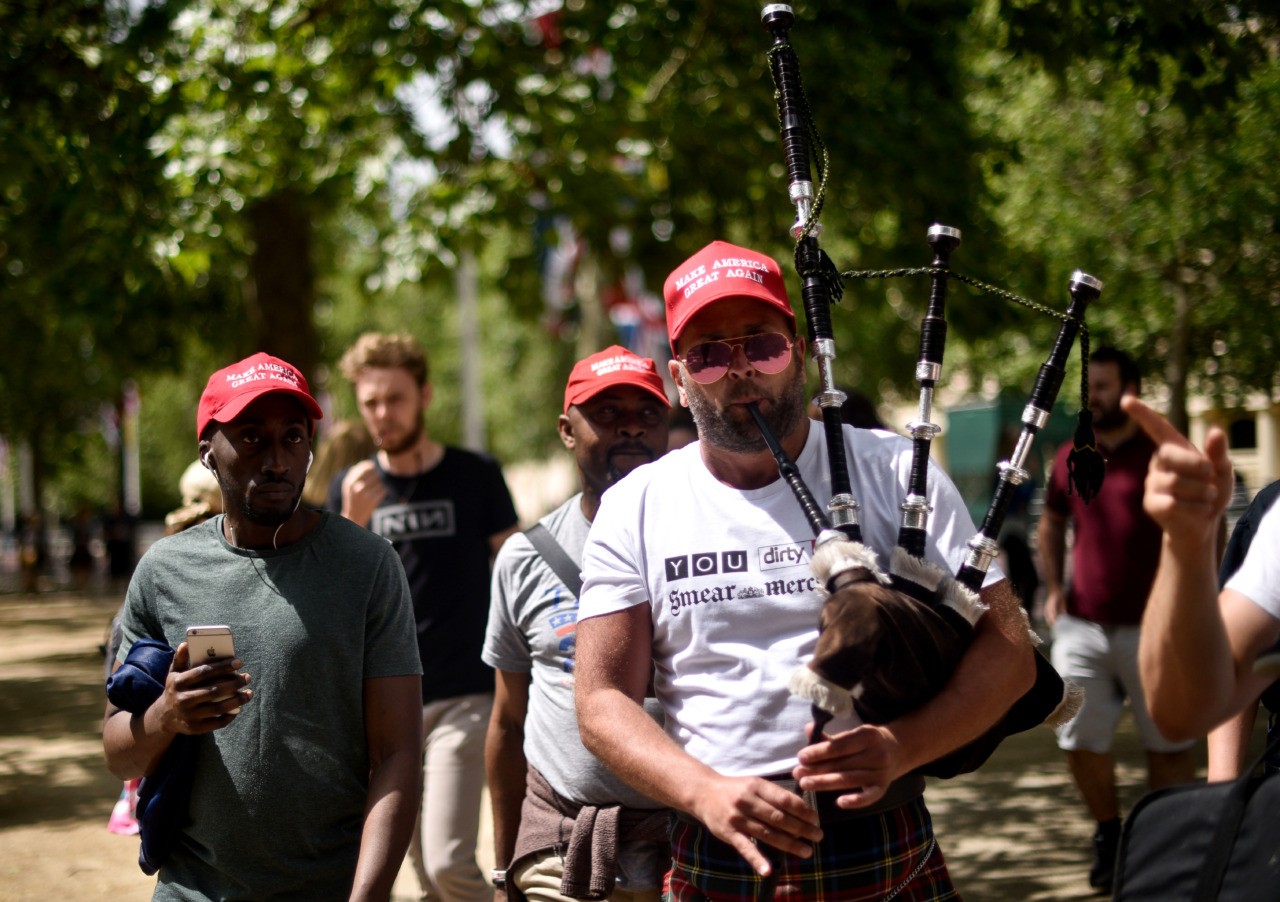