The third and final day of President Trump’s State Visit to the United Kingdom kicked off Wednesday morning in Portsmouth, the home of the Royal Navy, for a day of commemorations of the D-Day landings of 1944.

Leaders of allied nations including President Trump, UK Prime Minister Theresa May, and Canadian Prime Minister Justin Trudeau paid tribute to veterans by reading letters, prayers, and poems written to those who fought in 1944.

The Queen was introduced to leaders by the Prime Minister @10DowningStreet – each representing the allied nations that took part in D-Day. #DDay75 pic.twitter.com/8rQ5I0gTBZ 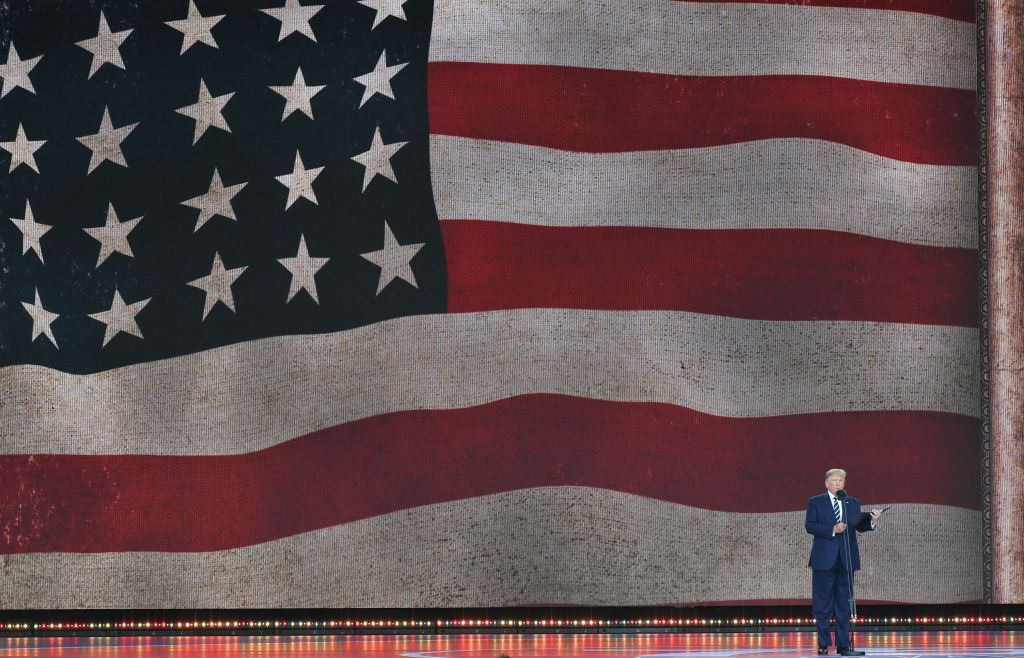 US President Donald Trump stands and speaks during an event to commemorate the 75th anniversary of the D-Day landings, in Portsmouth, southern England, on June 5, 2019.  MANDEL NGAN/AFP/Getty Images 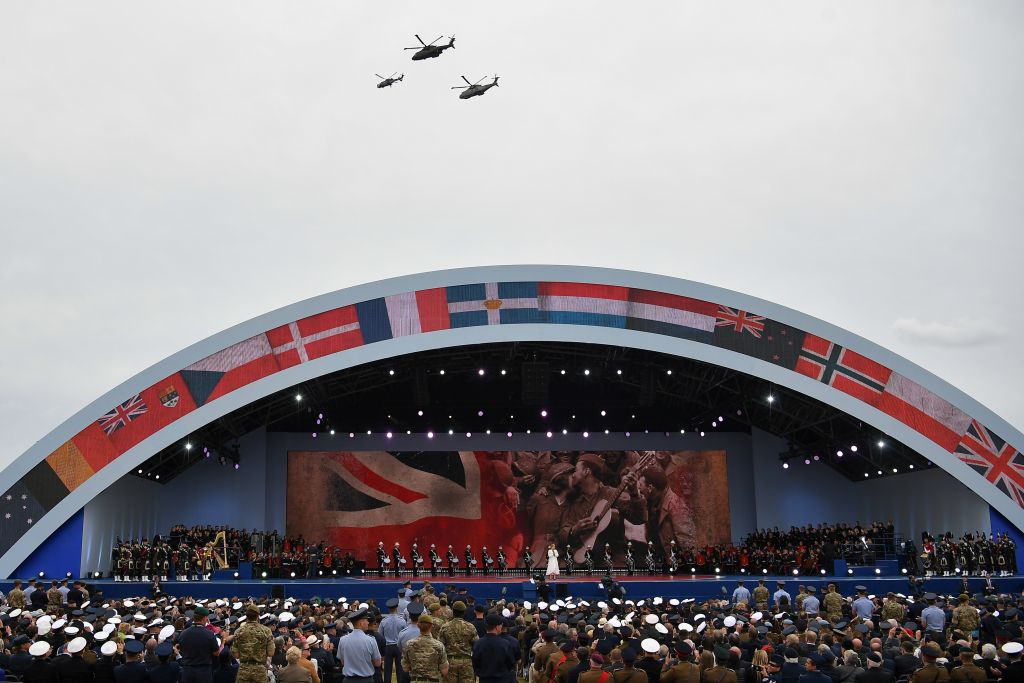 Helicopters fly over the stage as Sheridan Smith sings during an event to commemorate the 75th anniversary of the D-Day landings, in Portsmouth, southern England, on June 5, 2019. – MANDEL NGAN/AFP/Getty Images

President Trump is the guest of Her Majesty Queen Elizabeth II, who he accompanied in Portsmouth Wednesday morning and sat beside while the presentation of remembrance went on.

Her Majesty’s moving speech reflected the fact that, among the gathered world leaders present for the commemoration, she was the only one present who had served during the Second World War. Hailing her own “resilient” generation, the British head of state said: ”

Your Excellencies, Ladies and Gentlemen,

When I attended the commemoration of the 60th anniversary of the D-Day Landings, some thought it might be the last such event. But the wartime generation – my generation – is resilient, and I am delighted to be with you in Portsmouth today.

Seventy-five years ago, hundreds of thousands of young soldiers, sailors and airmen left these shores in the cause of freedom.

In a broadcast to the nation at that time, my Father, King George VI, said: ‘…what is demanded from us all is something more than courage and endurance; we need a revival of spirit, a new unconquerable resolve…’

That is exactly what those brave men brought to the battle, as the fate of the world depended on their success.

Many of them would never return, and the heroism, courage and sacrifice of those who lost their lives will never be forgotten.

It is with humility and pleasure, on behalf of the entire country – indeed the whole free world – that I say to you all, thank you.

After the speeches, the leaders circulated and met with veterans, some of whom are now over 100 years old.

The Associated Press give their summary of the day:

D-Day saw more than 150,000 Allied troops land on the beaches of Normandy in northwest France on June 6, 1944, carried by 7,000 boats. The Battle of Normandy, codenamed Operation Overlord, was a turning point in the war, and helped bring about Nazi Germany’s defeat in May 1945.

“The Normandy landings 75 years ago were a moment of historic international cooperation,” May said. “And it is right that at the heart of today’s commemorations are the veterans who fought to secure the liberty and the peace that we now enjoy.” 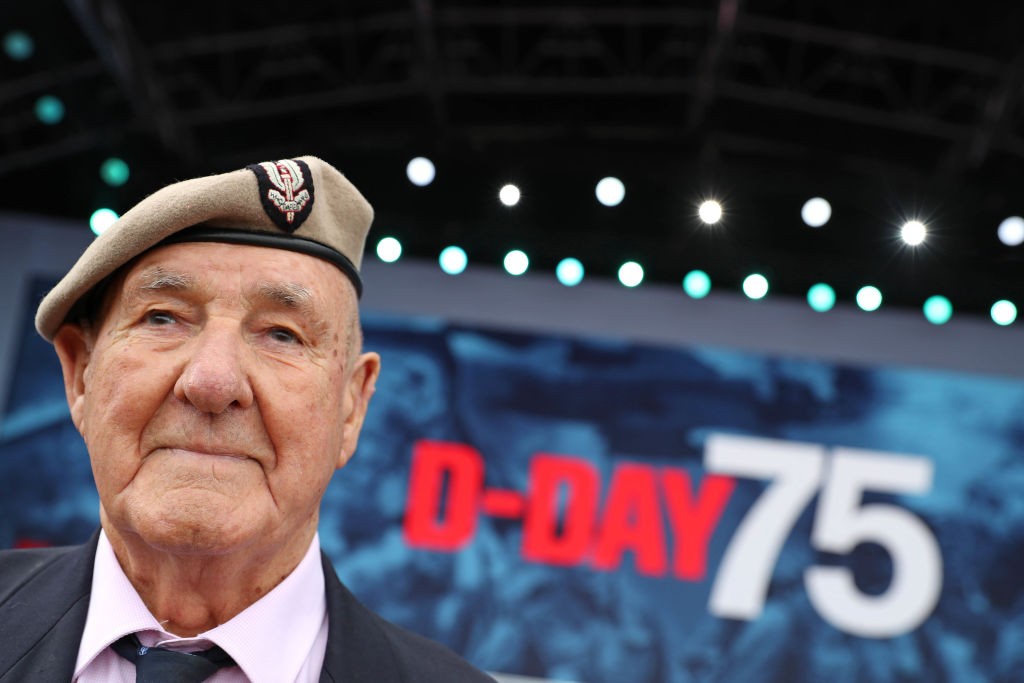 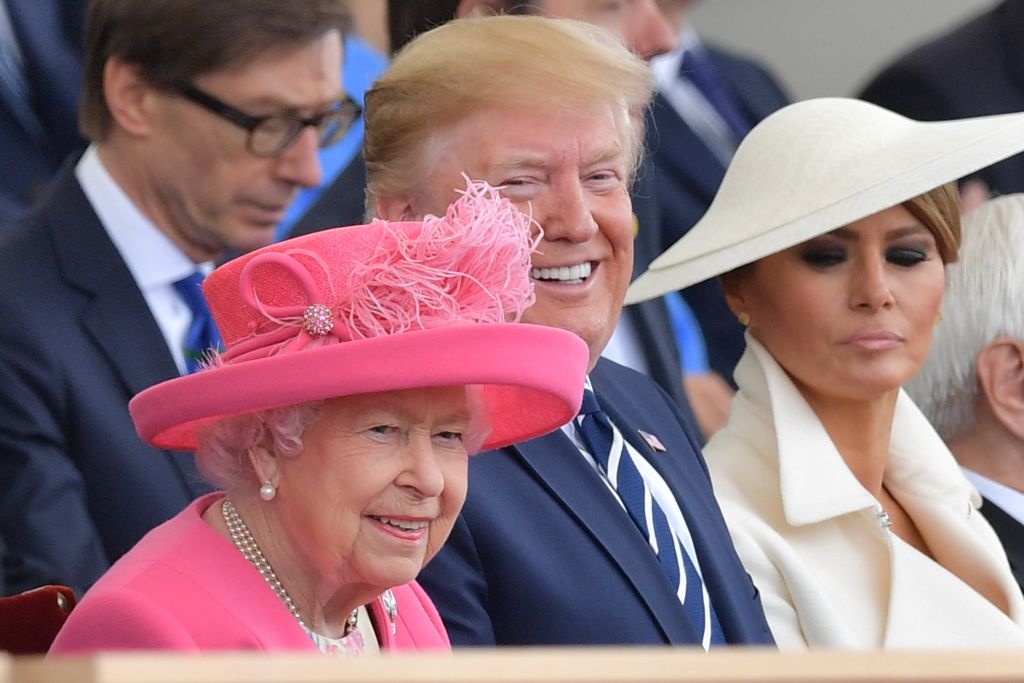 Planning to attend are presidents, prime ministers and other representatives of the countries that fought alongside Britain in Normandy: the United States, Canada, Australia, Belgium, the Czech Republic, Slovakia, Luxembourg, Denmark, France, Greece, the Netherlands, New Zealand, Norway and Poland.

The leader of the country that was the enemy in 1944 , German Chancellor Angela Merkel, is also attending.

Russian President Vladimir Putin, who attended 70th anniversary commemorations in France five years ago, has not been invited. Russia was not involved in D-Day but was instrumental in defeating the Nazis on the Eastern Front.

In Portsmouth, dignitaries plan to read from historical documents linked to D-Day. In May’s case, it’s a letter written by Capt. Norman Skinner of the Royal Army Service Corps to his wife, Gladys, on June 3, 1944, a few days before the invasion. It was in his pocket when he landed in Normandy.

“I can imagine you in the garden having tea with Janey and Anne getting ready to put them to bed,” wrote Skinner, who was killed the day after D-Day. “Although I would give anything to be back with you, I have not yet had any wish at all to back down from the job we have to do.”

On Thursday the focus shifts to France, where commemorations will be held at simple military cemeteries near the Normandy beaches.

Events in France began early Wednesday morning with U.S. Army Rangers climbing the jagged cliffs of Normandy’s Pointe du Hoc to honor the men who scaled them under fire 75 years ago.

Elderly veterans looked on as members of the 75th Ranger Regiment started mounting the limestone promontory at dawn, pulling themselves up on ropes one by one, seagulls swooping above.

They were recreating a journey taken by the U.S. Army’s 2nd and 5th Ranger Battalions to destroy Nazi guns atop the cliffs. The operation helped prepare the way for Allied troops landing on beaches up a few kilometers (miles) up the coast to break Hitler’s stranglehold on France.

Elsewhere in Normandy parachutists were jumping from C-47 transporters in World War II colors and other aircraft, aiming for fields of wild flowers on the outskirts of Carentan, one of the early objectives for Allied troops.

Among the jumpers will be American D-Day veteran Tom Rice, 97. He jumped into Normandy with thousands of other parachutists in 1944, and recalled it as “the worst jump I ever had.”

Like many other veterans , Rice said he remains troubled by the war.

“We did a lot of destruction, damage. And we chased the Germans out and coming back here is a matter of closure,” he said. “You can close the issue now.”