The French Senate has voted to reject the plans for rebuilding Notre Dame cathedral in Paris put forward by the French executive including President Emmanuel Macron who wanted an “inventive reconstruction”, mandating that the work must be traditional.

The vote by the Senate may put to rest concerns over the fate of the globally renowned Notre Dame cathedral which was severely damaged by fire in April, which has been further threatened by suggestions the promised rebuild be led by a modernist architect. Now the cathedral and spire must resemble “the last known visual condition” before the fire, meaning a totally traditional rebuild. 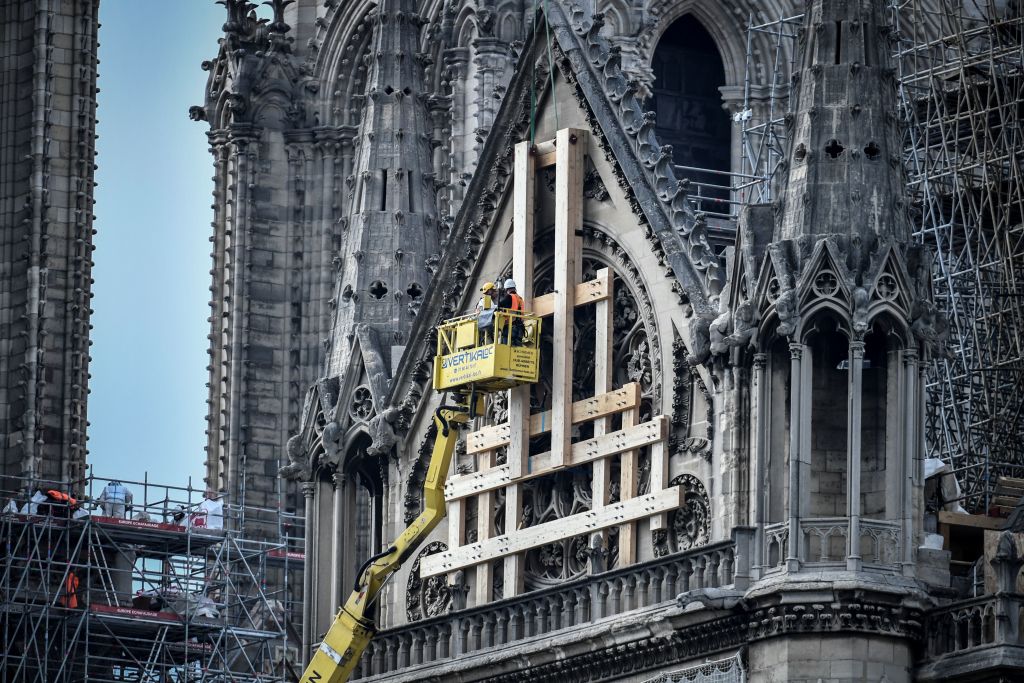 Workers on a platform are lifted up to a wooden protective structure placed in front of the rose window, as construction work to secure the Notre-Dame de Paris Cathedral, which was badly damaged by a huge fire on April 15, takes place in the French capital Paris on May 20, 2019. (Photo by STEPHANE DE SAKUTIN / AFP)

French President Emmanuel Macron made a number of pronouncements in the immediate aftermath of the fire, including that rebuilding would be completed within five years, and that the design would be “inventive” and a modern “contemporary architectural gesture”. French Prime Minister Édouard Philippe said the design was being opened to an international architectural competition.

The suggestion was immediately met by a flurry of incongruous, contemporary designs by modernist design offices hoping to get the presumably lucrative contract.

But in amending the law governing the rebuild on Monday, the Senate voted that the reborn cathedral should not only resemble Notre Dame as it was before the fire, but even that modern building materials replacing the traditional would have to be justified first, reports France24. 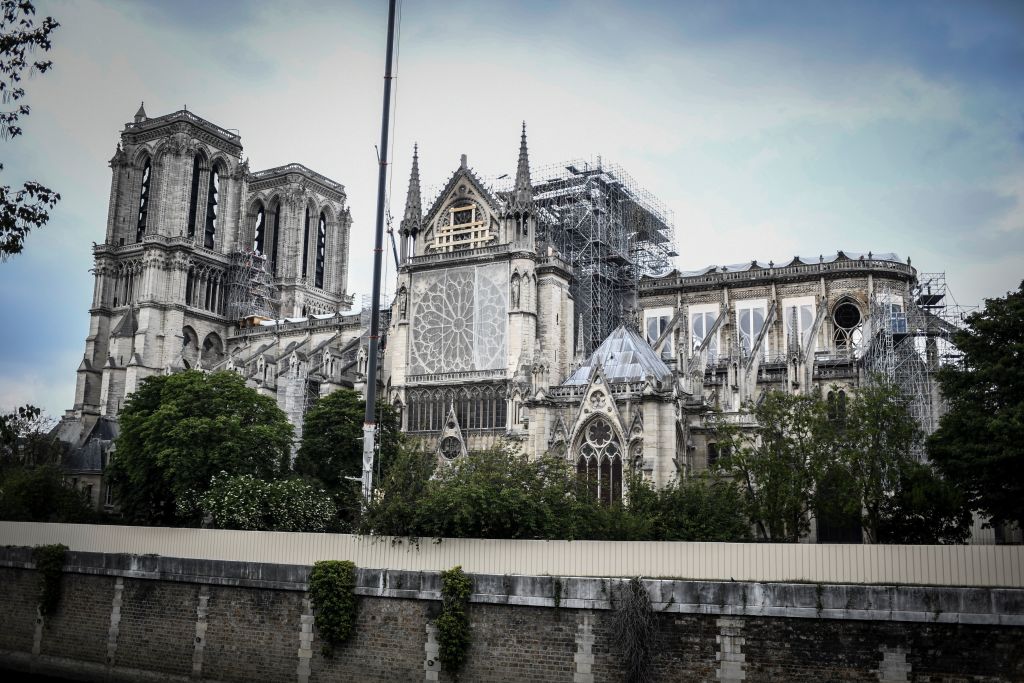 A picture taken on May 20, 2019 shows Notre-Dame de Paris cathedral as construction work is ongoing to secure the site that was badly damaged by a huge fire last April 15 in the French capital Paris. (Photo by STEPHANE DE SAKUTIN/AFP/Getty Images)

The Senate also raised concerns about the five-year timescale called for by President Macron, which is seen by both members of the chamber and the traditional architecture profession as too short a time period to do a good job, and would lead to “cutting corners” to meet the deadline. The president of the Commission of Culture, Catherine Morin-Desailly spoke out against the five-year limit, saying the project would take as long as it takes, while another member remarked that “Presidential speeches do not make law”.

The government had intended to exempt the Notre Dame rebuild from planning and heritage preservation laws to facilitate the modern changes, but the Senate also voted to remove those exemptions.

Socialist member David Assouline also attacked President Macron’s presumption to control the future of the cathedral, saying in the debate: “This is a law to rebuild Notre-Dame-de-Paris, not Notre-Dame-de-l’Élysée”, a reference to the official home of the French president, the Élysée Palace. 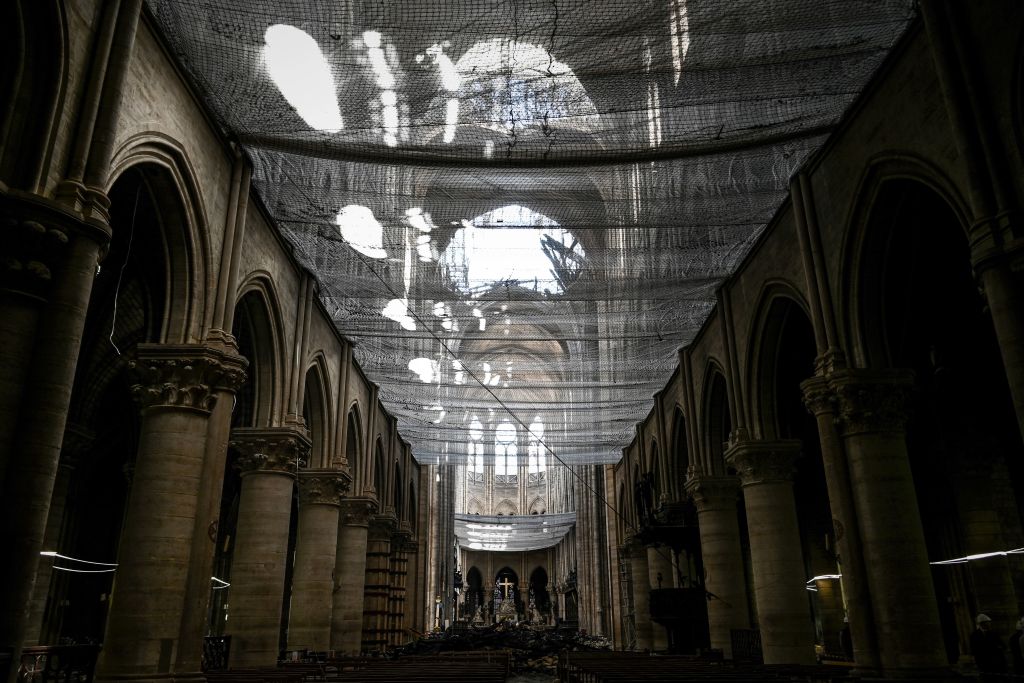 TOPSHOT – A picture shows a protective net in the Notre Dame de Paris Cathedral during preliminary work one month after it sustained major fire damage on May 15, 2019, in Paris. – The April 15, fire destroyed the roof and steeple of the 850-year-old Gothic cathedral. Images of the ancient cathedral going up in flames sparked shock and dismay across the globe as well as in France, where it is considered one of the nation’s most beloved landmarks. (Photo by PHILIPPE LOPEZ/AFP/Getty Images)

Comment has also been passed outside the debating chamber, including by Paris Mayor Anne Hidalgo who spoke at the weekend when calling for an “identical” reconstruction.

While admitting she was a fan of modern architecture, the Mayor said when it came to Notre Dame, tradition had to be respected, reports Le Figaro. She said: “Our Lady is a work that belongs to all Parisians, to all French people, to the whole world. We must respect it as such. I am therefore in favour of it being restored identically.”

The law still has to be confirmed by the French lower house, who originated the law and to whom it will now be passed back with the amendments, meaning it is possible the Macron-loyal assembly may attempt to insist on rejecting the traditional preference. 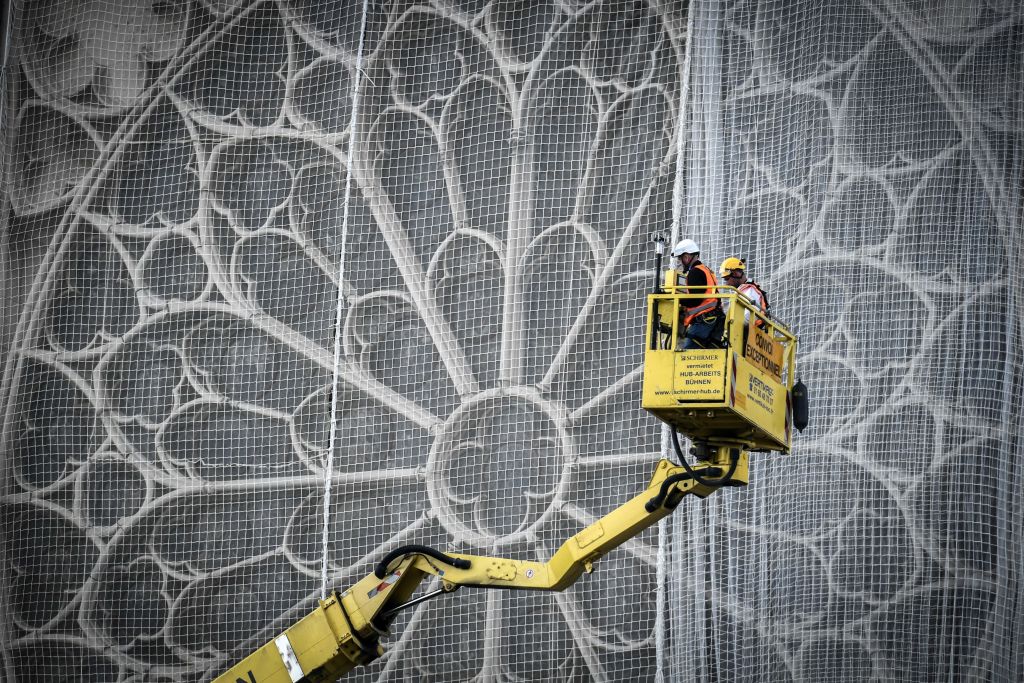 Workers on a platform are lifted up to the rose window, as the renovation and repair work on Notre-Dame de Paris Cathedral, which was badly damaged by a huge fire on April 15, takes place in the French capital Paris on May 20, 2019. (Photo by STEPHANE DE SAKUTIN / AFP) (Photo credit should read STEPHANE DE SAKUTIN/AFP/Getty Images)

The architectural profession, which is generally fanatically modernist in outlook, has criticised the decision to see a much-loved icon rebuilt properly, rather than modernised. It may be that the vote by the French Senate is even in response to the surge of design proposals put forward in the wake of the fire.

Among the ideas put forward by the highly self-regarding architectural profession were a variety of steel and plate-glass roofs to replace the original oak and lead which was destroyed on the night of April 15th, a shard-inspired crystal glazed spire, a swimming pool, and even a minaret to memorialise dead Algerians who fought France for independence in the 1960s.

Britain’s Architect’s Journal carries criticisms of the new traditional plan, including the denouncement of “nostalgia”, the claim that the decision is a “terrible loss to the democracy of design”, and a “missed opportunity”. The Journal also reported the remarks of architect Francis Maude, who laments the decision by the Senate as implying France believes there is not anyone presently practising architecture who has the talent to make a design to match the original. This, he said, is a “pity”.