(AP) — In a rare series of moves, Dutch authorities are investigating whether doctors may have committed crimes in five euthanasia cases, including the deaths of two women with advanced Alzheimer’s disease.

In one of the Alzheimer’s cases, which prosecutors began probing in September, a physician drugged the patient’s coffee without her knowledge and then had the woman physically restrained while delivering the fatal injection. The ongoing criminal investigation is the first since the Netherlands made it legal for doctors to kill patients at their request in 2002.

Dutch prosecutors announced they were examining four other cases last month, including the death of another Alzheimer’s patient who “lacked the capacity to express her own will,” according to a statement from the prosecutor’s office. A spokesperson said that specific criminal charges, if any, would be determined only after the investigations are finished. Several legal experts said that if doctors were found to have killed patients without their explicit request, they could potentially be charged with murder.

The investigations highlight the difficulties doctors face in handling euthanasia requests for those who later develop dementia. Mental decline can eventually make patients unable to understand the significance of their earlier demand to be killed, and as their brain changes, so can their personality and desires.

The Netherlands is one of five countries that allow doctors to kill patients at their request, and one of two, along with Belgium, that grant the procedure for people with mental illness. For those with late-stage dementia, euthanasia is still possible if the person made a written demand specifying the conditions under which they want to be killed and if other criteria are met, namely if the doctor agrees the patient is suffering unbearably with no prospect of improvement.

Whether Dutch authorities prosecute the doctors in the two Alzheimer’s cases being investigated will likely set a course for how the increasing numbers of people with dementia who seek euthanasia will be handled.

Since 2002, more than 55,000 patients have been lawfully killed by a doctor. About 6,500 cases were reported last year, of which 166 involved people with dementia. In the vast majority of these cases, the patients were still in the early stages of the disease and were competent to make a request for euthanasia. 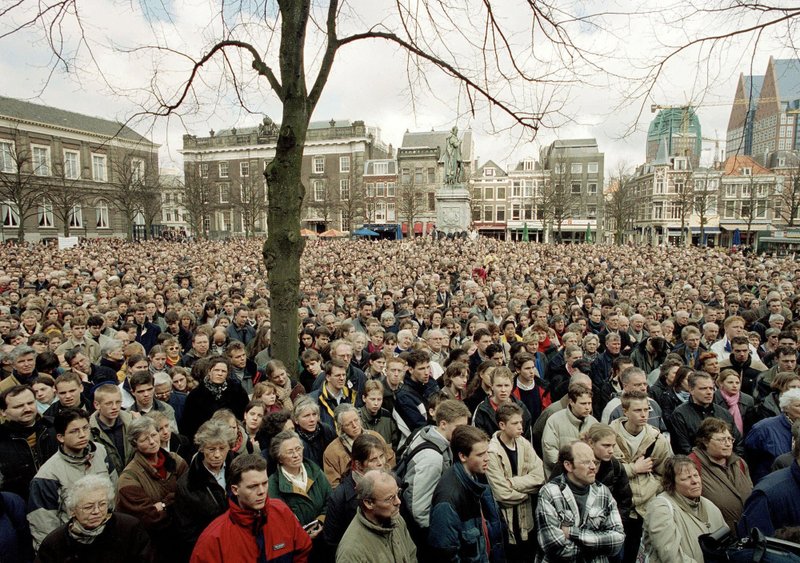 In this April 10, 2001 file photo, thousands demonstrate outside Dutch government buildings as the Upper House of Parliament debates the legalization of euthanasia at The Hague, Netherlands. In 2018, the Netherlands is one of five countries that allow doctors to kill patients at their request, and one of two, along with Belgium, that grant the procedure for people with mental illness. (AP Photo/Serge Ligtenberg, File)

The case investigators began scrutinizing in September involved a 74-year-old woman who had renewed her living will about a year before she died, according to a detailed report issued by a Dutch regional euthanasia review committee.

She wrote that she wanted to be euthanized “whenever I think the time is right.” Later, the patient said several times in response to being asked if she wanted to die: “But not just now, it’s not so bad yet!” according to the report.

The doctor said she was fulfilling a written request the patient made for euthanasia years earlier and that since the patient was not competent, nothing the woman said during her euthanasia procedure was relevant.

“Even if the patient had said at that moment: ‘I don’t want to die,’ the physician would have continued,” the committee wrote, citing the doctor’s testimony. Given the clear signs the patient was struggling to protest her death, the committee said the doctor should have stopped.

“On the morning of the euthanasia, when her family was present, the patient was even making plans to go out to eat with them,” the report said.

The examining judge will soon hear witnesses and receive expert reports before deciding whether to charge the doctor with a crime in the case.

Among the four remaining cases, one other suspicious euthanasia death is also being examined by the prosecutor’s office in The Hague and three other cases are being investigated in the northern and eastern parts of the country.

The 2016 case has divided opinion even among those who support assisted dying.

“This case is appalling,” said Dr. Boudewijn Chabot, a euthanasia advocate who was involved in a historic case at the Supreme Court that helped set the legal conditions for the procedure. He said the euthanasia of the Alzheimer’s patient “goes beyond the law as we understand it.”

Some physicians said it was problematic to kill people with late-stage dementia because it’s hard to know what their wishes truly are.

Dr. Amanda Thompsell, chair of old-age psychiatry at Britain’s Royal College of Psychiatrists, said it can be risky to assume how much a dementia patient is suffering mainly by observing them. “If the person says they don’t want something, then we have to accept that,” she said.

Other experts said that it can be ethical to act without patients’ full understanding, such as when they are covertly given medicine, if it helps the patient or if it is consistent with what the patient wanted.

“You respect the patient’s choice, in a situation where nothing else can be done to help,” said Suzanne van de Vathorst, an associate professor of medical ethics and philosophy at Erasmus University in Rotterdam.

Ghislaine van Thiel, a medical ethicist at Utrecht University Medical School, said she would be surprised if Dutch prosecutors don’t take the 2016 Alzheimer’s case to trial.

“We are definitely crossing a line if we’re overruling the wishes of incompetent patients to live, because a will to live is your basic, fundamental right,” she said. “This is such a big discussion that we need the consideration of the courts to set standards on how the law views the rights of people with dementia and how we should consider their wishes.”