An illegal ‘North African’ migrant was behind the knife attack in Marseilles, France, on Saturday according to reports, which has been claimed by the Islamic State jihadist group.

The alleged migrant killed two females – a student and a nurse – aged 17 and 20 with a knife, slitting one across the throat, whilst reportedly shouting “Allahu Akbar”.

France remains in a state of emergency due to repeated terror attacks and the man, who was described as “dressed in black,” was gunned down and killed by security forces.

Sources told the Mail Online that he is thought to be a North African of either Algerian or Tunisian origin, who was arrested in Lyon for shoplifting just days ago. 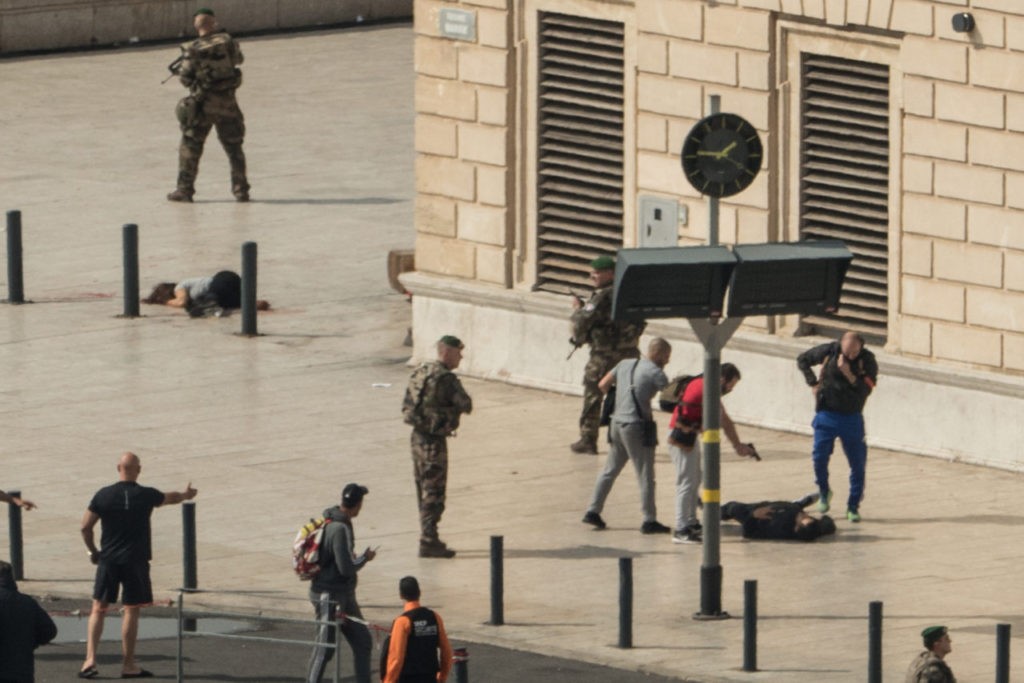 French police point a gun at a man on the ground (C) as a stabbed woman lies (L) while soldiers secure the area following an attack on October 1, 2017 at the Saint-Charles main train station in the French Mediterranean city of Marseille. (PAUL-LOUIS LEGER/AFP/Getty)

The migrant had no papers on him and was in “an irregular situation in Europe”, so giving the authorities a chance to place him under judicial control.

“Instead they let him go, and the next they heard about him was in connection with a double murder,” said the investigating source in Marseille.

“Forensic evidence has linked him with the incidents in Marseille and in Lyon, but his actual name and other details remain in dispute.”

“He was known to police for his links to drug-related crimes, but had used up to eight identities over the past few months.”

The source also claimed the attacker was not on a terrorist watch list and had no links with radicalization. However, the Islamic State terror group has claimed responsibility.

In a statement from the Islamic State-affiliated Aamaq news agency, the terror group said the attacker was one of its “soldiers” who was targeting countries involved in the coalition fighting in Syria and Iraq.

In a tweet, President Emmanuel Macron said: “Deeply outraged by this barbaric act, in pain with the families and relatives of the victims of Marseille.

“I hail the Operation Sentinelle soldiers and the police forces who reacted with extreme calmness and efficiency.”

A police source explained: “[The stabbings were] frenzied and took place in front of lots of witnesses. The man first shouted threats, and then launched into the two women.

“The two were killed by a knife, and then soldiers on anti-terrorism duties intervened. They shot the man dead.”