Sweden’s largest trade union is encouraging women to call a new hotline and report men who use the “oppression technique” of “mansplaining” – explaining things to women that they already understand.

Unionen represents 600,000 private sector workers and its new phone lines will be manned by feminist politicians, comedians, and even scientists.

“It is about putting your finger on the small everyday problems which become large when they stack up”, the union explained in an article.

‘Mansplaining’ is a term used by feminists to describe a recently invented gender relations crime, defined by Unionen as when “a man explains something to a woman without being asked, particularly something which she might already know more about than the man”.

“Have you been the victim of mansplaining? Or do you just have speculations and questions about mansplaining and oppression techniques?” they asked on their Facebook page as they launched the new service.

“We want to help you, regardless of gender, to recognise and handle oppression techniques in your workplace. All for a more equal working life.” 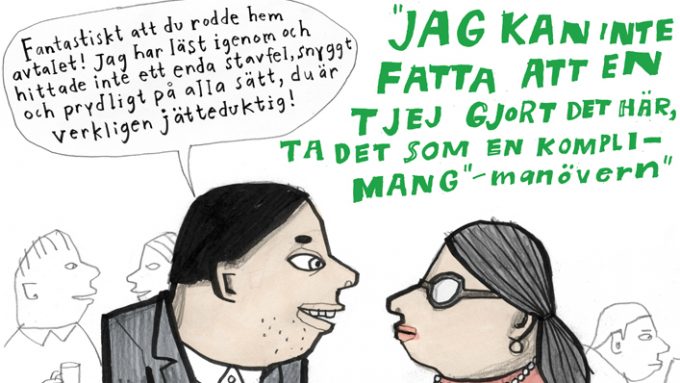 In blog post, Unionen acknowledged that “critics argue the term is unfounded and is a technique that women use against men”.

One such critic, Marcus Nilsson, wrote on Facebook that the term is a “sexist, scornful, invective casually used by leftwing people in order to silence men when they have no real argument…”

“The word is not recognised except within a narrow circle of left-wing ideologues who are often trained in pseudo-science gender studies,” he added.

Responding to a different user on the social media site who also claimed the initiative unfairly stigmatised all men, the official Unionen page claimed that “mansplaining is more often performed by men and we believe it is important to talk about the problem…”

“Women can absolutely be ignorant and boorish, but I would not call it mansplaining”, the group adds in another blog post. “When you miss the bigger picture, namely, that men generally have more professional confidence than women and that gives them advantages on the job. It is an important, systematic problem we have to solve.”

To back up this claim, the group references a study by the American Psychological Association, which supposedly found that men “tend to overestimate their intelligence to a much greater extent than women”.

“The study also showed that self-assurance in men grows with age,” they add.

Facebook user Hans Byström was unconvinced: “This is so stupid, I’m dying. In an effort to keep up with trends the Union has scared away potential members.”