“We are committed to speaking and dialoguing with anybody who is willing to speak to us,” Gallagher said.

“In some ways, this is an opportunity to share on something which is, if you like, not explicitly pure theology over which we might find ourselves very much disagreeing, but taking a common challenge to humanity in which we can then approach that in a religious and in a theological way, but the thing we have in common possibly is much greater than the things that divide us,” he said.

Despite its pro-forma signing of the 2015 Paris Climate Accord, China is a notorious polluter, with a concentration of fine particulate matter in the air 361 percent more than that of the United States.

China is also the world’s largest coal producer and consumer, accounting for about half of coal consumed globally. In the year 2020, China built over three times as much new coal-power capacity as the rest of the world combined. 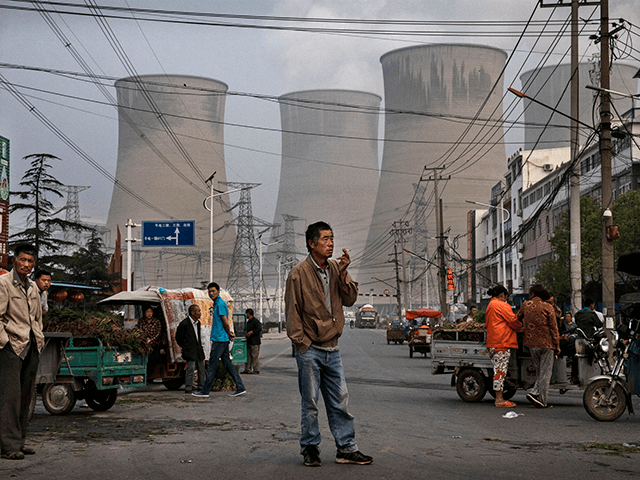 Chinese street vendors and customers gather at a local market outside a state owned Coal fired power plant near the site of a large floating solar farm project under construction by the Sungrow Power Supply Company on a lake caused by a collapsed and flooded coal mine on June 14, 2017 in Huainan, Anhui province, China. (Photo by Kevin Frayer/Getty Images)

China is also the largest international financier of fossil fuel infrastructure and through its massive Belt and Road Initiative (BRI), Beijing has built or is building hundreds of coal-fired power plants in countries around the world, exporting pollution as it goes.

Along with pollution, China has emitted more annual greenhouse gases over the past ten years — including carbon dioxide, methane, and nitrous oxide —than any other country in the world, having surpassed the United States as the top emitter in 2005.

All of which is to say that if the Vatican would like to discuss environmental issues with China, there is plenty of material. Nonetheless, if the Holy See’s well-documented record of unwillingness to ruffle China’s feathers is any indicator, such conversations are unlikely to aim at persuading Beijing to modify its ecological behavior.

In other words, if the Vatican has been notoriously unwilling to call out China for mass incarcerations, torture, rape, and executions of Uighur Muslims, it is highly improbable that the Holy See will now point a finger at Beijing for its pollution problem.

In 2018, the Vatican entered into a thoroughly disadvantageous deal with China over the naming of Catholic bishops in the country, apparently just for the privilege of saying it had.

Last July, an investigative report by the Pillar, an online Catholic news agency, raised concerns of Vatican vulnerability to blackmail from China, noting that in the year 2018 China owned Grindr, a gay hook-up app, whose extensive use in the Vatican has been uncovered.

In that period prior to the signing of the bishop-naming deal, China had access to all the data from Grindr, including location, messaging, and identification data.

At least 16 different mobile devices emitted signals from Grindr on at least four days between March and October 2018 within the areas of the Vatican City State not open to the public, the Pillar found.