Firefighters have wrapped the base of the giant sequoia tree known as “General Sherman” in a foil-like material to protect it from an ongoing wildfire in the Sequoia National Forest, which was triggered recently by lightning and drought conditions. 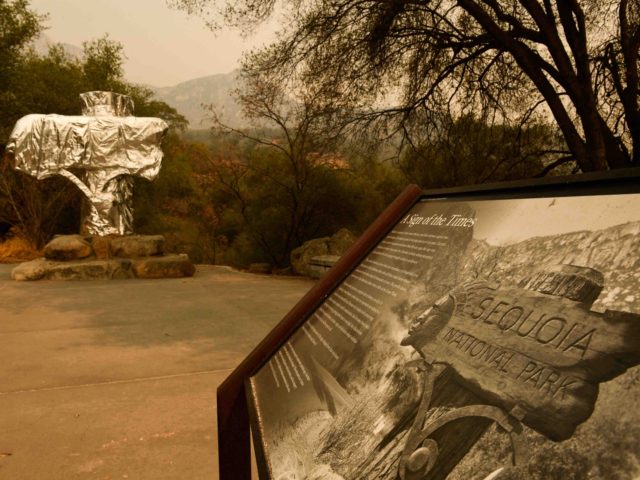 The Sequoia National Park historic park entrance sign wrapped in fire resistant foil stands along Generals Highway during a media tour of the KNP Complex fire in the Sequoia National Park near Three Rivers, California on September 18, 2021. – Firefighters battling to protect the world’s biggest tree from wildfires ravaging the parched United States said September 17 that they are optimistic it can be saved. Crews are battling the KNP Complex fire, comprised of the spreading Paradise and Colony fires, which have so far consumed 4,600 hectares (11,400 acres) of forest since they were sparked by lightning a week ago. (Photo by Patrick T. FALLON / AFP) (Photo by PATRICK T. FALLON/AFP via Getty Images)

The 21,777-acre lighting-sparked wildfire — dubbed the KNP Complex fire after the Colony and Paradise fires merged into one — grew by more than 3,900 acres overnight, but officials said Sunday that hundreds of firefighters have valiantly kept key areas of the forest under control. The park is east of Fresno.

In an upbeat report Sunday, fire officials said they were feeling fairly confident about protecting the Giant Forest, home to thousands of towering sequoias. Numerous well-established walking trails meander through this iconic part of the park, so firefighters have been able to move around and work from multiple locations.

The ancient [General Sherman] sequoia, a major tourist draw for the park, is 275 feet tall and over 2,000 years old. It is considered the largest known tree in the world by volume.

Crews had been working for the past week to prepare the ancient sequoias by wrapping them in aluminum-foil-like material and raking vegetation from around their bases. 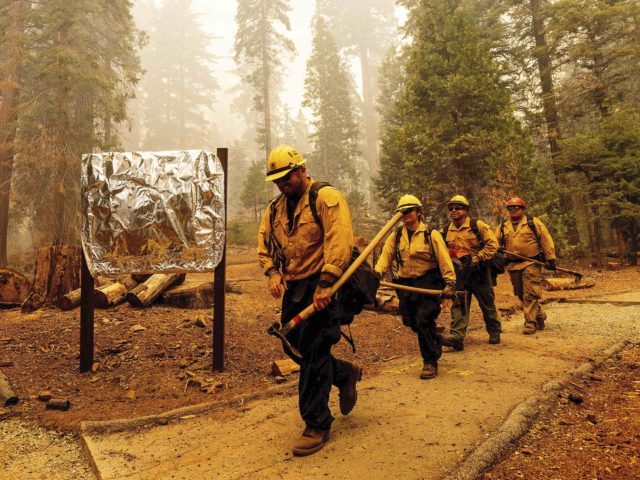 California’s latest wildfire season is being fueled, in part, by an ongoing extreme drought that has affected much of the state, which had only just begun to recover from the 2011-2017 drought, one of the worst in the state’s history. 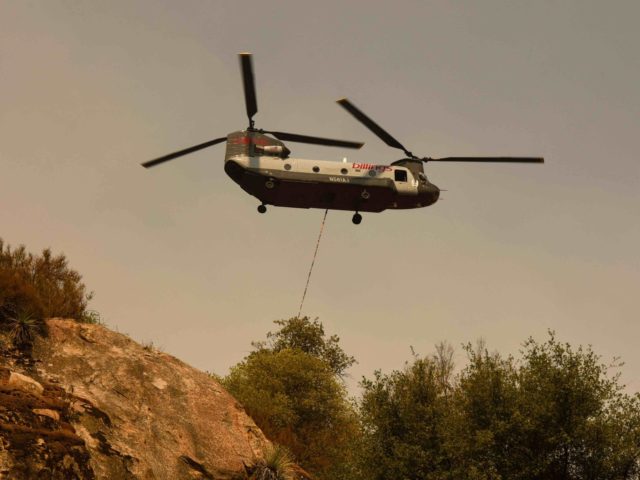 A Boeing CH-47 Chinook firefighting helicopter carries water to drop on the fire as smoke rises in the foothills along Generals Highway during a media tour of the KNP Complex fire in the Sequoia National Park near Three Rivers, California on September 18, 2021. (Photo by PATRICK T. FALLON/AFP via Getty Images)

The two years of heavy winter rains brought only temporary relief, as dry soils and depleted aquifers have barely recovered. 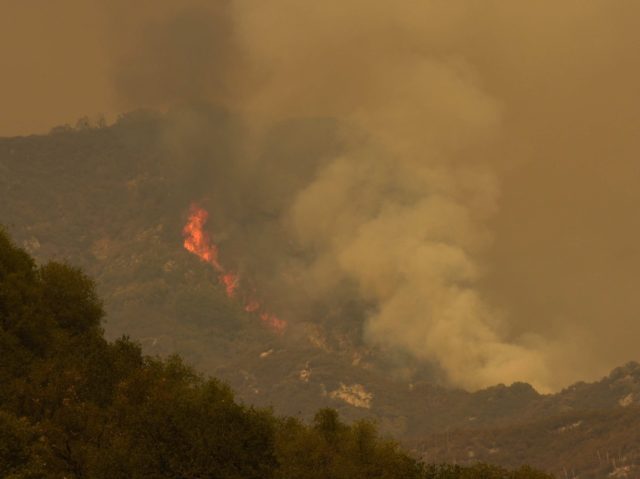 A plume of smoke and flames rise into the air as the fire burns towards Moro Rock during the KNP Complex fire in the Sequoia National Park near Three Rivers, California on September 18, 2021. (Photo by PATRICK T. FALLON/AFP via Getty Images)

According to the National Park Service, portions of the park were still smoldering in May from fires that burned in 2020.

Modest winter rains last year were not enough to make up the difference, and it is not clear how rainy this next winter will be.