Authorities in Nevada have issued evacuation orders for some areas near Lake Tahoe, as the Caldor Fire approached the border, threatening to cross over from California.

The Caldor Fire joined the Dixie Fire — still burning — as the second fire in the state’s recorded history to burn from one side of the Sierra Nevada mountain range to the other.

Nevada Gov. Steve Sisolak on Monday declared a state of emergency “in the anticipation of the fire crossing from California into the state of Nevada in the coming days,” his office said.

“We are asking residents to say vigilant, pay attention to emergency phone alerts and have a plan in place for potential evacuations,” officials said.

By late Tuesday afternoon, new evacuation orders came through for the mountain areas just past the state line, including Kingsbury at the top of Daggett Summit. There, half a dozen sheriffs deputies in safety vests began a door-to-door notification as most residents packed their cars and headed out. 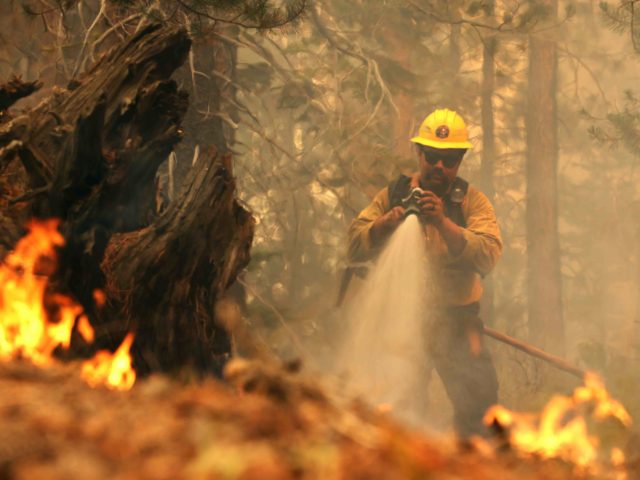 MEYERS, CALIFORNIA – AUGUST 31: A firefighter sprays down hot spots while battling the Caldor Fire on August 31, 2021 in Meyers, California. The Caldor Fire has burned over 190,000 acres, destroyed hundreds of structures and is currently 16 percent contained. (Photo by Justin Sullivan/Getty Images)

The local Tahoe Daily Tribune reported Tuesday that firefighters have stopped trying to stop the advanced the fast-moving blaze, and instead are steering it toward an area already burned by the Tamarack Fire, which is largely under control.