The NSW State Premier Gladys Berejiklian confirmed the crash deaths in the state’s Snowy Monaro region, adding few details are currently available as to the circumstances behind the tragedy.

Flight tracking made available later in the day showed the course of the downed aircraft:

Coulson Aviation in the U.S. state of Oregon confirmed one of its Lockheed large air tankers left Richmond air force airbase with retardant for a firebombing mission and radar contact was lost over rugged bushland near the national capital Canberra.

It said the accident was “extensive” but had few other details.

Coulson has grounded its large air tanker fleet following the accident, pending a review to rule out any systemic issue, such as a fuel problem.

“The only thing I have from the field reports are that the plane came down, it’s crashed and there was a large fireball associated with that crash,” said Rural Fire Service Commissioner Shane Fitzsimmons. 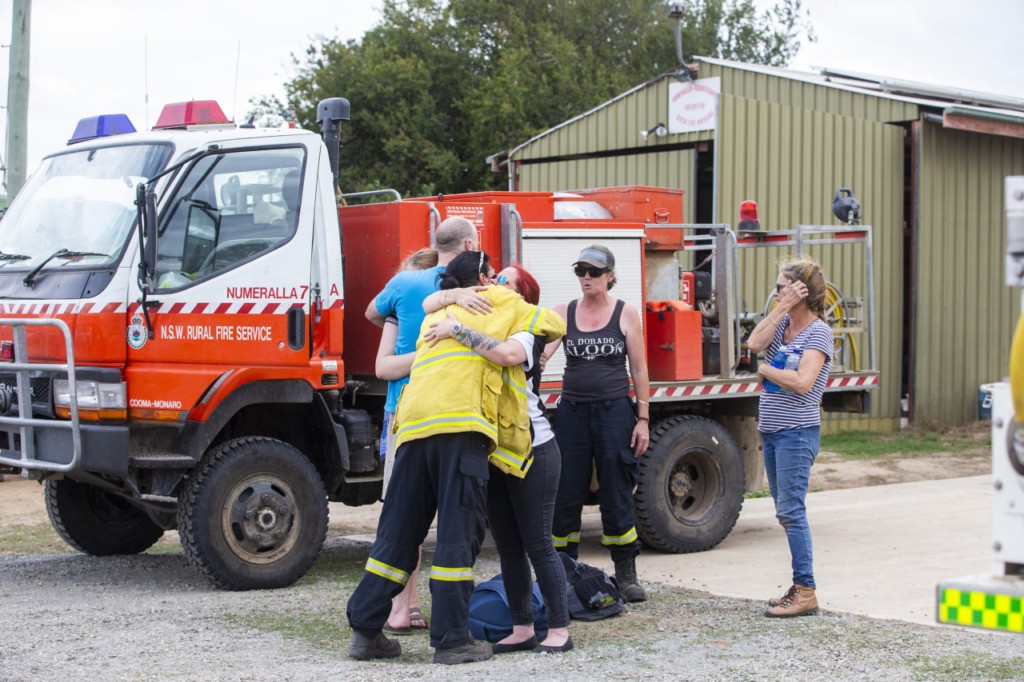 People are seen embracing at Numeralla Rural Fire Brigade near the scene of a water tanker plane crash on January 23, 2020 in Cooma, Australia. The repurposed C-130 Hercules, built in America by Lockheed Martin, took off from Richmond RAAF base at 1pm, and disappeared from the flight radar just after 2pm. Coulson Aviation, the Canadian operator of the C-130 aircraft, has now grounded their fleet as a mark of respect for the victims and to re-assess safety conditions. (Jenny Evans/Getty Images)

“Our hearts go out to their loved ones. They were helping Australia, far from their own homes, an embodiment of the deep friendship between our two countries,” she said in a statement.

“Thank you to these three, and to all the brave firefighters from Australia and around the world. Your service and contribution are extraordinary. We are ever grateful,” she added.

Culvahouse in turn Tweeted his statement:

While details remain scarce, one theory is the plane may have been “aerodynamically overloaded”, said Geoffrey Dell, an expert in accident forensics and investigation, told Reuters.

This meant it may have turned or changed altitude too quickly for its load, forcing it to lose altitude sharply.

“It’s designed to operate to certain G (gravity)-limits, and if you go over those, different parts of the structure can be overstressed,” added Dell, a professor at Central Queensland University.

The missing plane was a re-purposed C-130 Hercules, built in 1981 in America by Lockheed Martin.