Rapper Tyga voluntarily turned himself in to the L.A.P.D. on Tuesday to face charges of felony domestic violence, according to reports.

TMZ reported Camaryn Swanson, his girlfriend, accused the Deuces rapper of beating her on Monday morning during an argument at his L.A. home.

The woman reportedly showed up at the 31-year-old’s home at 3 a.m. on Monday and an argument immediately ensued. Swanson told investigators that Tyga hit her and offered photos of a bruised face as evidence.

Los Angeles Police officers reportedly attempted to interview the rapper at his home that day, but he refused to talk to them. By Tuesday, he had agreed to appear at the station for questioning.

Tyga’s representative, Jack Ketsoyan, told TMZ, “The allegations you have been reading about our client the past few days are false and will be disproven.”

The rapper, whose real name is Michael Stevenson, was arrested and charged with felony domestic violence and his bail has been set at $50,000. He promptly paid bail and was released.

For her part, Camaryn has posted photos of her bruises to social media, saying, “I’ve been emotionally, mentally and physically abused and I’m not hiding it anymore.” She has also disputed TMZ’s story that she showed up at Tyga’s home at 3 a.m. acting belligerent and argumentative. She also released a statement on Instagram. 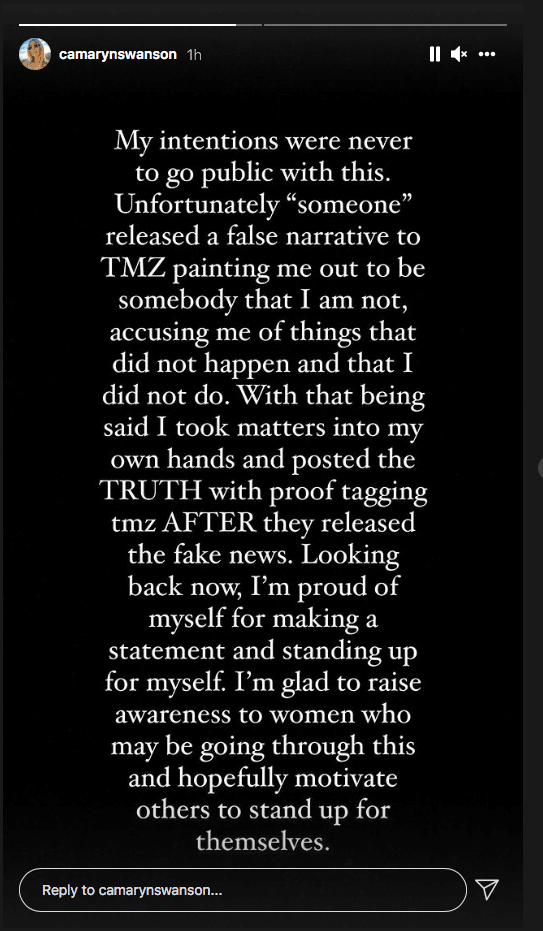 “@tmz_tv I didn’t show up ‘screaming’ or uninvited. When I tried to leave, he physically assaulted and refused to let me leave for hours,” she wrote, adding, “I’m so embarrassed and ashamed it had to get to this but I have to stand up for myself.”