Hollywood celebrities have rushed to their battle stations in the fight to save California Gov. Gavin Newsom (D), who is facing a bruising recall election as Republican challenger Larry Elder continues to gain momentum.

With mail-in voting already underway, stars are pleading with Californians to vote “no” on the recall, hoping residents will forget about the state’s out-of-control homelessness crisis, violent crime wave, and soaring cost of living.

Celebrities including John Legend, Dave Bautista, Mark Ruffalo, Bette Midler, Rob Reiner, Elijah Wood, and George Lopez have publicly voiced their support for the governor, with some spinning the recall as a Republican-engineered attempt to undo a democratic election. 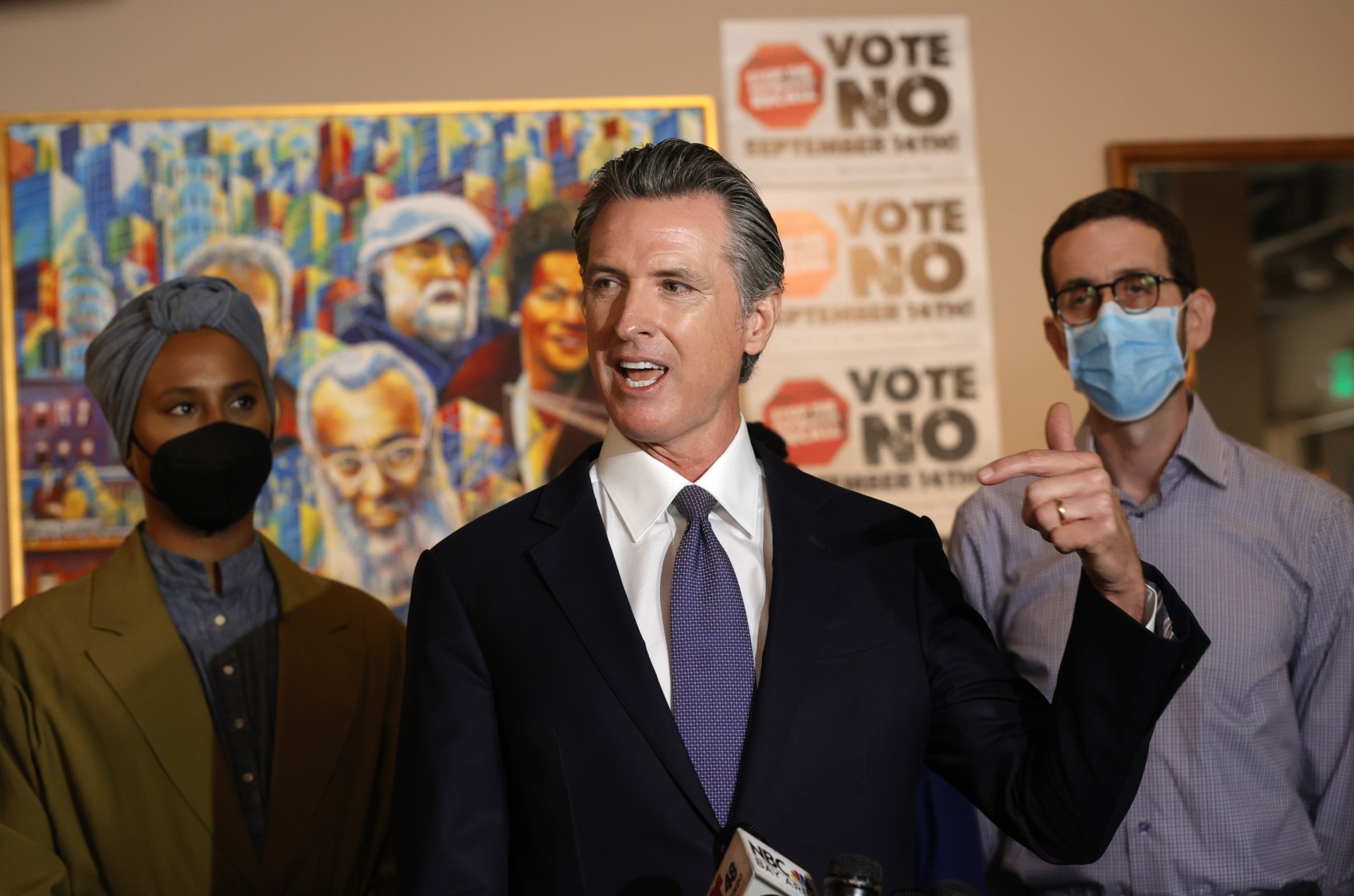 But Newsom has alienated large swaths of traditionally Democrat-voting Californians, including Latinos, with one poll showing 44.5 percent of Latino voters saying they would vote to recall the governor. 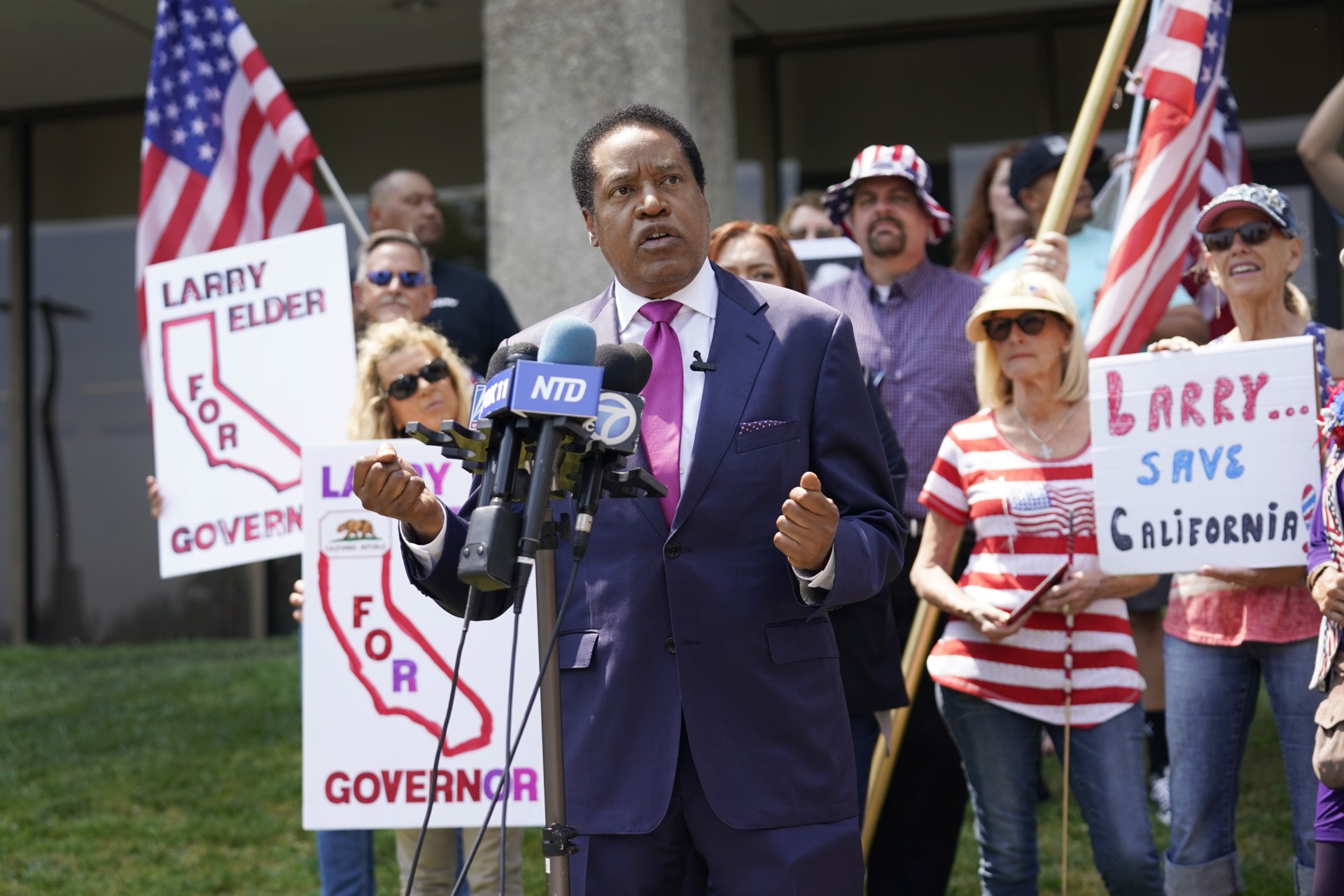 In this July 13, 2021 file photo radio talk show host Larry Elder speaks to supporters during a campaign stop in Norwalk, Calif. Elder, in his first press conference since announcing his candidacy July 12, told reporters that if he replaces Democratic Gov. Gavin Newsom in the Sept. 14 election any mask or vaccine mandates in place at that time “will be suspended right away.” (AP Photo/Marcio Jose Sanchez, File)

Public distrust in Newsom exploded after he was photographed socializing indoors among a large group of maskless people at the upscale French Laundry restaurant during the height of the coronavirus pandemic last year. The governor had promoted masks and social distancing but clearly failed to heed his own advice.

The hypocrisy rankled voters across the political spectrum following months of ruinous shutdowns that hurt countless small businesses across the state.

With victory far from certain, scared Hollywood elites are rallying behind Newsom.

Don’t DeSantis our California. Reject the ridiculous recall. Vote No and return your ballot by 9/14.

Disney’s The Avengers star Mark Ruffalo, who lives in New York, appealed to pro-organized labor sentiment among Californians in his effort to boost Newsom. Bette Mider, another New York resident, lashed out at Larry Elder, saying he has a “legit shot at winning.”

Californians, vote NO on the recall by Sept. 14! It's a sly attempt by Trump allies & anti-union special interests to install a right-wing Republican as governor. When you get your ballot in the mail, #VoteNoRecall and return it promptly! #UnionStrong https://t.co/BVeJTDGyzs

#CALIFORNIA, got your #recallballot? If you don't vote NO, #LarryElder has a legit shot at winning. Remember him? The guy dumped by his fiancée because she says he threatened her with a gun? You have to all vote like hell because you know that just makes the #GOP love him more!

Actress-comedian Sarah Silverman told voters to choose “no” on this “motherfucking recall,” warning that if Republicans win, “they’ll do it everywhere.”

Vote NO on this motherfucking RECALL. The ballot’s in your mailbox. Vote No. that’s all. Then send her in. If Republicans find this recall grift works they’ll do it everywhere.

CALI VOTERS!! Try not to be distracted by my toned arms and VOTE NO on the recall! The ballot’s in your mailbox, Kid⬇️⬇️ pic.twitter.com/h6nw4j8a5O

This is even bigger than California. The ReTrumplicans are doing everything they can to overturn elections that don’t go their way. As if Gerrymandering isn’t enough! They’re aggressive,they’re desperate and they have no bottom. Dont let this happen! 🙏🏼#VoteNoOnTheRecall https://t.co/eo5tLvSfSG

California vote NO on the recall or you could end up with this misogynist thug https://t.co/OwNFwIsfqi

Actor George Lopez delivered a bilingual English-Spanish video message in which he said he’s “sticking with Gavin Newsom” and “voting ‘no'” on the recall.

Reminder to vote NO on the recall in California. We need to keep the lunatic extremist Repubs out of power (and still primary the Corp Dems at every turn).

The Princess Bride star Cary Elwes called the recall a “time worn plot” from the GOP.

The recall for the governor in California is a time worn plot by the GOP every time a Democratic one is elected. VOTE NO on the recall and end this moronic attempt by the right to overthrow our duly elected governor.

The pop star known as Finneas said it would be “VERY fucking lame” if California elected a Republican governor.

It will be VERY fucking lame if we elect a republican governor of California out of sheer lack of awareness in September. Vote no on the recall.

As if it wasn’t already DEEPLY apparent:
Vote NO on the Recall#KeepCaliforniaBLUE

Rob Reiner tweeted, “We cannot let a party [the GOP] that stands for nothing control the most populous state in the country.”

While so much is going on the GOP quietly attempts to add to their power grab by targeting Califoria. We can not let a party that stands for nothing control the most populous state in the country. Save Democracy. Vote NO on the recall.

The Journey of Natty Gann star Meredith Salenger expressed Democrats’ fear that a Republican governor would choose a GOP senator to replace Sen. Dianne Feinstein (D-CA) if she decides to retire.

California. By now, You have received your ballot in the mail regarding the recall of @GavinNewsom. #VoteNO We do not want a Republican governor to install a Republican senator if anything happens to one of our senators. Then Mitch McConnell is back in power. Mail in your ballot!

This is what’s at stake, California. VOTE NO. https://t.co/dwxG5tvr5x

Actress Kristen Johnston tweeted a picture of herself appearing to flash a middle finger at the camera.

CALIFORNIA >> Do not forget to vote NO on the recall..Thank you

I admit — I find this kinda shit funny when it's happening in Alabama or Mississippi.

Feels less so when it's in my own state.

Vote NO on the recall. https://t.co/ilKfJgMKQT

The bottom line is if you vote to recall Gavin Newsom, you’re basically voting for this guy and all his cousins.

Californians, ON SEPTEMBER 14th VOTE NO ON THE RECALL! https://t.co/Mpw7lwDF8q

Actress Barbara Hershey also voiced her opposition to the recall.

Please vote no on the recall! https://t.co/afJtS6krTq