NEW YORK (AP) — Jackie Mason, a rabbi-turned-comedian whose feisty brand of standup comedy led him to Catskills nightclubs, West Coast talk shows and Broadway stages, has died. He was 93.

Mason died Saturday at 6 p.m. ET at Mt. Sinai Hospital in Manhattan after being hospitalized for over two weeks, the celebrity lawyer Raoul Felder told The Associated Press.

The irascible Mason was known for his sharp wit and piercing social commentary, often about being Jewish, men and women and his own inadequacies. His typical style was amused outrage.

“Eighty percent of married men cheat in America. The rest cheat in Europe,” he once joked. Another Mason line was: “Politics doesn’t make strange bedfellows, marriage does.” About himself, he once said: “I was so self-conscious, every time football players went into a huddle; I thought they were talking about me.”

His death was mourned far and wide, from fellow comedian Gilbert Gottfried, who called him “one of the best,” to Fox News Channel personality Sean Hannity, who hailed Mason as “irreverent, iconoclastic, funny, smart and a great American patriot.” Henry Winkler tweeted: “Now you get to make heaven laugh.”

Mason was born Jacob Maza, the son of a rabbi. His three brothers became rabbis. So did Mason, who at one time had congregations in Pennsylvania and North Carolina. Comedy eventually proved to be a more persistent calling than God.

“A person has to feel emotionally barren or empty or frustrated in order to become a comedian,” he told The Associated Press in 1987. “I don’t think people who feel comfortable or happy are motivated to become comedians. You’re searching for something and you’re willing to pay a high price to get that attention.”

Mason started in show business as a social director at a resort in the Catskills. He was the guy who got everybody up to play Simon Says, quiz games or shuffleboard. He told jokes, too. After one season, he was playing clubs throughout the Catskills for better money.

“Nobody else knew me, but in the mountains, I was a hit,” Mason recalled.

In 1961, the pint-sized comic got a big break, an appearance on Steve Allen’s weekly television variety show. His success brought him to “The Ed Sullivan Show” and other programs.

He was banned for two years from the “Sullivan” show when he allegedly gave the host the finger when Sullivan signaled to him to wrap up his act during an appearance on Oct. 18, 1964.

Mason’s act even carried him to Broadway, where he put on several one-man shows, including “Freshly Squeezed” in 2005, “Love Thy Neighbor” in 1996 and “The World According to Me” in 1988, for which he received a special Tony Award.

“I feel like Ronald Reagan tonight,” Mason joked on Tony night. “He was an actor all his life, knew nothing about politics and became president of the United States. I’m an ex-rabbi who knew nothing about acting and I’m getting a Tony Award.” 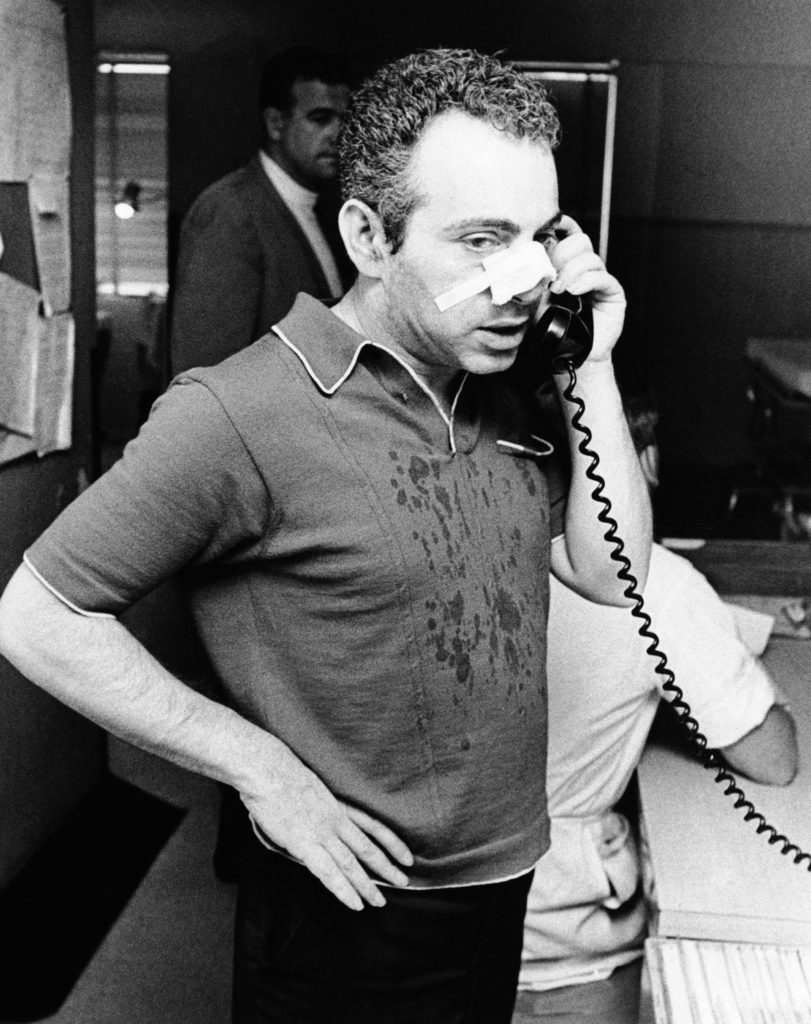 Comedian Jackie Mason has a bandaged nose and bloodstained shirt at a Miami hospital in Florida, Feb. 13, 1967 where he was hit 8 to 10 times in the face by an unknown assailant. Mason said a man opened his car door as he was parked in front of his apartment at 5 a.m. and slugged him and then ran. (AP Photo/Harold Valentine)

Mason called himself an observer who watched people and learned. From those observations he said he got his jokes and then tried them out on friends. “I’d rather make a fool of myself in front of two people for nothing than a thousand people who paid for a ticket,” he told the AP.

His humor could leap from computers and designer coffee to then-Sen. John Kerry, former Israeli Prime Minister Ariel Sharon and Donald Trump. He was able to articulate the average Joe’s anger, making the indignities of life seem funny and maybe just a little bit more bearable.

“I very rarely write anything down. I just think about life a lot and try to put it into phrases that will get a joke,” he said. “I never do a joke that has a point that I don’t believe in. To me, the message and the joke is the same.”

On TV, Mason was a reliable presence, usually with a cameo on such shows as “30 Rock” or “The Simpsons” or as a reliable guest on late night chat shows. He performed in front of Britain’s Queen Elizabeth II and his show “Fearless” played London’s West End in 2012. 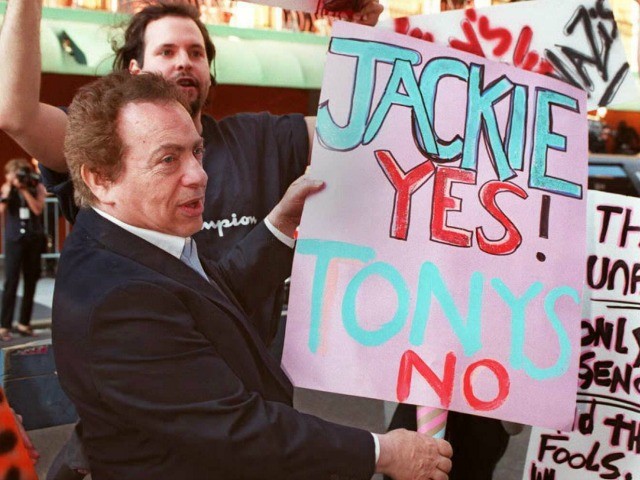 Comedian Jackie Mason holds a sign protesting against the Tony Awards outside the award ceremony 02 June in New York. Mason who appears in his own comedy show on Broadway entitled ‘Love Thy Neighbor’ was not nominated for an award as the Tony Committe does not recognise his one-man-show as a play. (JON LEVY/AFP/Getty Images)

He portrayed a Jewish ex-pajama salesman in love with an Irish-Catholic widow portrayed by Lynn Redgrave in a series called “Chicken Soup” in 1989 but it didn’t last. During the O.J. Simpson murder trial, the British Broadcasting Corp.’s Scottish service hired Mason as a weekly commentator. He was in “Caddyshack II,” a notorious flop.

Mason’s humor sometimes went too far, as when he touched off a controversy in New York while campaigning for GOP mayoral candidate Rudolph Giuliani against Democrat David Dinkins, who was Black. Mason had to apologize after saying, among other things, that Jews would vote for Dinkins out of guilt.

Felder, his longtime friend, told the AP that Mason had a Talmudic outlook on life: “That whatever you would say to him, he would start an argument with you.”

He is survived by his wife, producer Jyll Rosenfeld, and a daughter, Sheba.