Disney World has confirmed that its President Donald Trump animatronic statue will remain in its Hall of Presidents attraction in Florida despite the leftist outrage demanding its removal.

Since 1971, the famed Hall of Presidents attraction has featured animated figures of America’s presidents with each newly elected president added soon after election. The attraction was shut down for a retooling once Joe Biden entered the White House and now it is preparing to re-open with a new Biden figure.

Disney World is a private park and has a set of guidelines and standards to ensure guests have a good experience. That video is disgusting and immature. Families trying to enjoy their vacations not listen to your friends ridiculous shouting. Yelling at an animatronic….yikes

Despite the pressure campaign, Disney has made the decision to keep the Trump figure in place among the presidents.

On Tuesday, the Disney Parks Blog announced that the Hall is preparing for its new entry.

“For the past few months, work has been underway to add President Joe Biden to the stage as the 46th President of the United States,” the Disney blog noted 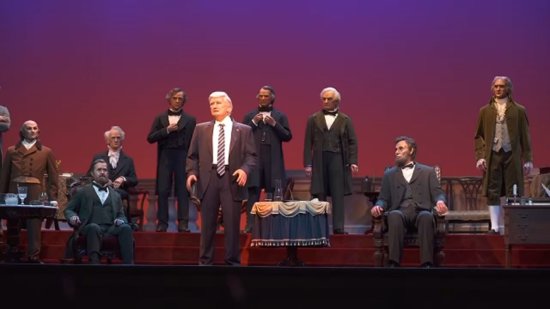 But the announcement went on to say that Trump will remain part of the attraction.

The blog continued: “And for those who are curious about what happens to presidents at The Hall of Presidents after their term has ended, the Audio-Animatronics figure of former President Donald J. Trump will take its place on stage among those who have previously served.”

The attraction is set to re-open with the new Biden animatronic included sometime next month.