According to Yahoo Entertainment, Alonso spoke of the upcoming queers characters and storylines that will be added to the Marvel movies at a fan event for the Hollywood premiere of Black Widow.

Alonso opened her remarks by cautioning fans who hope to see more LGBTQ content in Marvel movies that it won’t come all at once or anytime too soon. “It takes time; we have so many stories that we can tell,” she explained.

But she went on to promise more “representation” is coming:

We will empower those that are. We’re not changing anything. We’re just showing the world who these people are, who these characters are… There’s a lot that we have coming up that I think will be representative of the world of today. We’re not going to nail it in the first movie or the second movie or third movie, or the first show or second show, but we will do our best to consistently try to represent.

The comments come hot on the heels of Marvel Studios parent Disney’s move to showcase actor Tom Hiddleston’s “Loki” character in its streaming series as a “gender fluid” anti-hero. 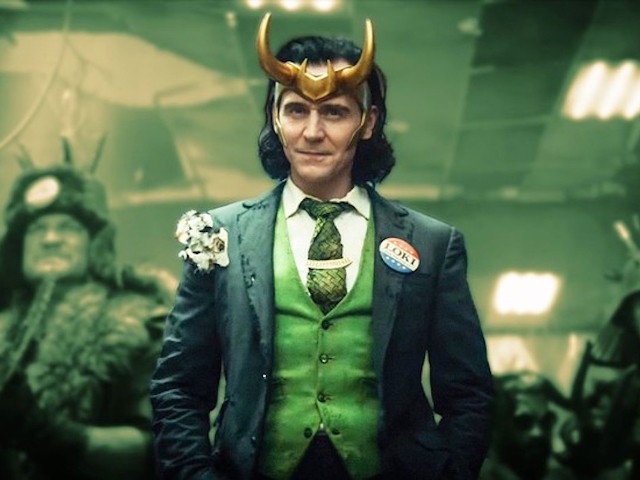 Actor Tom Hiddleston is Loki, the God of Mischief in the new Disney Plus series. Disney/Marvel Studios

“I have to be honest with you. It’s not a big deal,” Alonso said. “It is what it is when it suits the character. We’re not going to do it because it’s politically correct or incorrect. It is what it is. Don’t forget. We follow our comics. We try to follow them quite to the tee. So, in the comics, this is who he was.”

Alonso is hardly the first Marvel chief to say that the film house intends to put more gay content into its Marvel Cinematic Universe. As far back as 2019, Marvel Studios President Kevin Feige was reported saying the billion-dollar superhero movie machine would introduce a transgender person and a gay superhero in future films.

While they may have been surprised with this year’s revelation in Loki, comics industry watchers have assumed that likely candidates for those trans characters could come in The Eternals and or the martial arts flick Shang-Chi. Marvel Movie-watchers will see the studio’s first man-on-man gay kiss in The Eternals, which hits theaters on November 20.

So far, though, Marvel is keeping its plans close to the vest… or under its cowl, as the case may be.