Actress Rose McGowan accused Alyssa Milano of being the “leader of Karens” after the pro-defund the police Milano’s husband called the cops after a neighbor was out hunting squirrels with an airsoft rifle.

Milano, who has backed defunding the police, was accused of calling the law on a local teenager who was shooting at squirrels with the non-lethal toy gun. The actress later disputed some of the details of the reports saying that she was not the first person to call the police, and the person with the airsoft rifle was an adult, not a teen. But the whole incident seemed to smelled of hypocrisy to Rose McGowan, who was once Milano’s co-star on the early 2000s TV series, Charmed.

McGowan slammed Milano in a tweet on Wednesday, saying, “Who is the Leader of Karens? Alyssa Milano,” according to Fox News. It appears that McGowan later deleted the tweet. 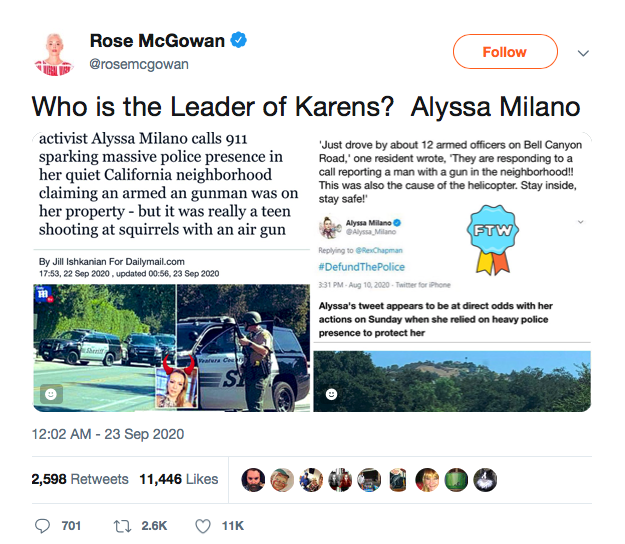 A “Karen” is slang for a white woman who pokes her nose into situations where it does not belong.

McGowan, though, took heat for her accusatory tweet. Some respondents criticized her for “trashing women.”

“What is your beef really?”one Twitter user asked McGowan. “You’ve been so controversial And simply mean, I thought you were better than this.”

Another lamented, “Surprised that you are for using your platform to attack women…especially under this circumstance.”

For her part, despite being a loud proponent of defunding the police, Milano has said that the “gun” episode was precisely the sort of situation that the police are supposed to be for.

“These are exactly the type of situations that police officers are trained for and should be responding to, and we will always support police having the resources they need for appropriate policing actions,” Milano said. “We’d love to see equally trained non-police professionals respond to addiction and mental health crises and non-violent events so that these brave officers can do the jobs they are so good at handling, as they demonstrated this weekend.

Apparently, rightwing media & trolls have decided that they should target me because my neighbor called the police after seeing a person dressed in black holding a rifle behind my home where I live with my young children and husband. Here is my statement and what really happened. pic.twitter.com/RwnSd9XCs0

McGowan has become an often intense critic of her former castmate. In August, McGowan accused Milano of trying to “steal” the #MeToo movement. And as far back as 2018, McGown noted that she “doesn’t like” Milano because “she’s a lie.”